Lauren Moffatt has come a long way since designing her collection from her business partner's boat. 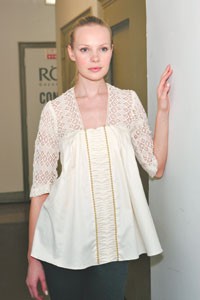 NEW YORK — Lauren Moffatt has come a long way since designing her collection from her business partner’s boat.

Moffatt began her business seven years ago with her partner, Rob Pepin. Finding it tough to make ends meet, she decided to forgo the traditional apartment and live on his boat, which he docked on the Hudson River. Moffatt designed her collections on the boat until the partners were able to afford to rent a small corner of a sewing factory on Seventh Avenue. Today, with a growing business, she’s ready to expand further.

For the past six years, Moffatt has sold her line exclusively in New York to Barneys New York, and to 150 independent stores nationwide. Now she has decided to open her business to new retailers, but still sell to Barneys. Beginning with the fall season, the collection will be sold at major department and specialty stores such as Bloomingdale’s, Nordstrom, Neiman Marcus, Intermix, Henri Bendel and Holt Renfrew in Canada.

“I think that we are ready to expand now,” she said. “We’ve taken our time to grow the right way, but now we are going to do it in a bigger way.”

To prepare for the entrance into these stores, Moffatt decided to change the line a bit, making clothes that were dressier than her usual designs. There now is a wide selection of satin dresses and tops, and each piece has a lot of detail, such as ruffled chiffon along the bottom of a red satin knee-length dress or a zipper chain along a satin ruffle on another dress.

“We have much more in the evening category, as well as a bunch of coats,” Moffatt explained. “It’s much more girly for me, but also with an edge, which is more of my signature.”

In addition to her growth at wholesale, Moffatt said she was looking to license her brand for belts, swimwear and bags (she already designs a few each season), shoes and eyewear.

“The swim stuff sells really well,” she said. “I would love to add more to the collection, but there’s only so much I can do alone.”