The Lauren by Ralph Lauren label has stretched into the athletic arena with Lauren Active, a line that melds fashion and function. 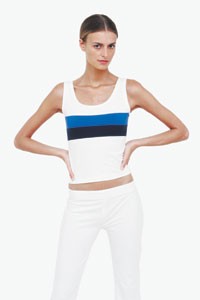 NEW YORK — The Lauren by Ralph Lauren label has stretched into the athletic arena with Lauren Active, a line that melds fashion and function.

The better-priced division of Polo Ralph Lauren began rolling out the line at stores this spring, and it will be expanded for fall with a wider selection of products and broader distribution, said Kim Roy, president of Lauren by Ralph Lauren.

“Many people were asking for something like this from us,” said Roy in an interview at the Lauren showroom at 550 Seventh Avenue here. “We had focus groups with our customers and they were very vocal about wanting this type of product.”

The new cruise items for Lauren Active have a nautical feel with blue and white colorways, and include merchandise such as cotton tennis skirts, seamless camisoles and knit track jackets, as well as terry cloth hooded jackets, polyester microfiber pants and cable sweaters. There are also cotton jersey tops and yoga pants made of cotton and spandex. Many of the pieces have performance elements, such as mesh pockets in the jackets and fabrics with wicking properties.

“The design is rooted in classic American design, but has a modern and fresh appeal,” Roy said.

Wholesale prices for Lauren Active range from about $15 to $70, Roy said. She noted the line has a separate logo from the core Lauren line. While she declined to give sales projections, sources estimate Active could rack up retail sales of about $30 million in its first year.

The line targets the same customers as the Lauren better-priced sportswear collection. In some stores, Lauren Active is sold alongside the core line, but with its own visual displays and hang tags, while in other retailers, such as Nordstrom, the collection is housed in the active department.

Bloomingdale’s and Marshall Field’s are among the other stores that are carrying the line this season. It launched initially in about 100 doors and will grow to 150 doors for fall, said Roy, who noted the line is sold on the polo.com Web site as well. She said the company feels Lauren Active could eventually be in about 300 to 400 doors. The line is sold in 20 Nordstrom stores, said Tonja Kuntz, Nordstrom’s corporate merchandise manager for women’s activewear. “Customers want apparel they can wear for nearly all aspects of their lives,” said Kuntz. “This makes this an appealing category for designers to play in.”

Lauren Active has been advertised in magazines such as Vogue and In Style, and similar marketing for the line will continue in the fall, said Benny Lin, senior vice president of merchandising and marketing for Lauren.

The move into activewear is part of a plan to expand the Lauren line, which has been back in the Polo Ralph Lauren fold since 2003. Lauren sportswear had been made under license by Jones Apparel Group, and Polo’s decision to take it back in-house resulted in legal action that is still pending.

Roy said the relaunch of the Lauren line has performed ahead of plan and the company continues to expand the brand into new areas. In addition to sportswear and activewear, which are made in-house, Lauren has 11 licenses for products including eyewear, jewelry, handbags, fragrance and home. Last year, the Lauren division had sales of about $400 million. The Lauren women’s line is sold in about 900 doors, while the petite and large-size collections are in about 450 doors each.

The company has also said it wanted to open freestanding stores under the Lauren label. Roy declined to comment on the progress of a retail rollout, but said, “We feel we have a lot of additional opportunities to grow this label.”

Polo Ralph Lauren is committed to building its business in the athletic arena. The company has signed on as the apparel sponsor of the U.S. Open Tennis Championships for the next four years, although the Lauren Active line will not be part of that deal, Roy noted. Polo sells performance apparel under its RLX technical label and also has an extensive golf collection under the Ralph Lauren brand.

The active arena has seen a number of new designer entrants in recent months, including Stella McCartney and her new collection with Adidas, as well as Pucci and Sir Paul Smith, who have collaborations with Rossignol and Burton, respectively.