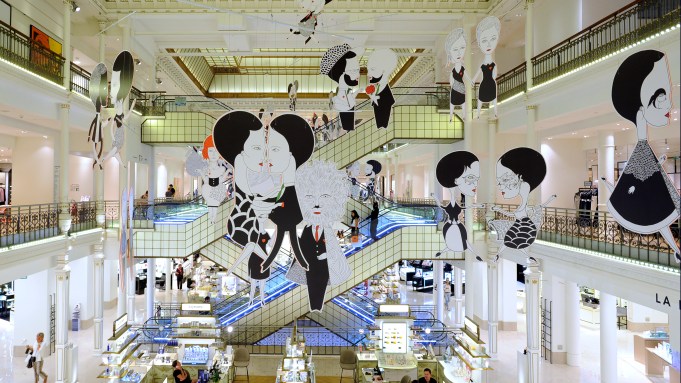 PARIS — The City of Light takes center stage in the latest storewide-themed exhibition of Le Bon Marché slated to open today. The exhibit features around 150 new labels from all neighborhoods of Paris including Château Rouge, Barbès and Montorgueil and Christian Louboutin as a guest of honor.

The event couldn’t be more timely when the city needs a morale boost amidst a lackluster economic climate and political turmoil as the Economy Minister Emmanuel Macron, an outspoken critic of French president François Hollande, resigned earlier this week.

Visitor levels remain very low 10 months after the November terrorist attacks. Hotel arrivals of foreign visitors were down 11.6 percent from January to May 2016. “We saw a slight improvement in March but unfortunately the Brussels attacks happened,” said Charles Boisseau, statistical research analyst for the Paris tourist and convention office, also noting that the transport strikes and demonstrations in May, the floods in June and then the Nice attack further tarnished Paris as a tourist destination.

“However, there’s no reason that we shouldn’t see an uptick by 2017, providing there’s no other imponderables,” he said.

Boisseau applauded the store’s initiative. “It’s a good thing that such players as Le Bon Marché show the treasures of Paris.”

City Hall, for its part, is to launch its third campaign to support fashion with the tagline “La Mode Aime Paris.” (or “Fashion Loves Paris” in English.) The visual featuring a model wearing an Issey Miyake dress and Jacquemus shoes will be plastered around the city from Sept. 21 to Oct. 5. This comes after the French authorities launched a campaign aiming to promote the city as a go-to spot, which includes advertising visuals featuring a raspberry macaroon; a park, or a colorful street art fresco, and are festooned with the slogan “Made in Paris.”

Le Bon Marché head of commercial events, guest relations and services Sophie Joly stressed that the showcase was planned prior to the November attacks. She admitted the management had hesitation about going ahead but decided to do so with a focus on the city’s vibrant creative energy. “The exclamation mark in ‘Paris!’ is there to show the city’s bursting creativity,” said Joly.

It’s split into three themes: new local brands; collaborations between designers, and exclusive items — or capsules —  created by the existing brands at Le Bon Marché for the exhibit. Think of a Dries Van Noten sweater inspired by Paris by night, a Kenzo blue sweatshirt featuring the Eiffel Tower and Fendi’s Peekaboo bag in the colors of the French flag — blue, white and red.

Among new labels picked up by Le Bon Marché are Patrons Paris, Bob Carpenter, Maison Château Rouge and Sézane. “[The exhibit] is an opportunity for us to test commercially some new brands,” said Jeremy Grodenic, Le Bon Marché buyer product manager for the men’s wear department, suggesting that some of them could stay permanently. (He noted that the Sacai label was first introduced to the store as part of Le Bon Marché’s Japan-themed exhibition in 2014 and is now in its assortment.)

Other highlights include a Christian Louboutin installation and a Moynat display — both located on the ground level— and whimsical characters sketched by street artist Fred Le Chevalier that are floating in the store’s atrium.