Now under new leadership in the U.S., sport brand Le Coq Sportif is getting back into apparel in the American market for spring with a selection of performance and lifestyle offerings. 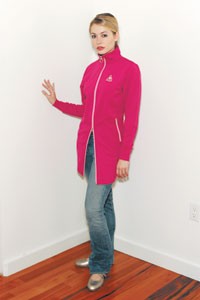 NEW YORK — Now under new leadership in the U.S., sport brand Le Coq Sportif is getting back into apparel in the American market for spring with a selection of performance and lifestyle offerings.

“Younger people today are open to new brands, especially ones that have a heritage,” said Jon Epstein, the former Fila U.S. president who is now heading up the new company Le Coq Sportif North America. “We feel there is still some mind share with the brand and a lot of potential to grow.”

Epstein and his team relaunched the brand here in footwear this fall and spring will be its first significant apparel collection in the U.S. in more than a decade. The company is taking a three-pronged approach this season by introducing lifestyle looks, performance tenniswear and products from the cobranded line with French designer Jean-Charles de Castelbajac.

The core women’s sportswear looks includes brightly colored track jackets, hooded tops and bottoms in knit fabrics, as well as jersey or fleece. Other offerings include jersey T-shirts and polo tops, and there is a a selection of shorts and outerwear, including a stretch technical fleece jacket.

Among the performance tennis offerings are polyester and Lycra spandex tennis skirts and tank tops, as well sport dresses and polo tops with wicking properties in purple, white and black. Many of the items in both performance and lifestyle collections feature the company’s distinctive rooter logo in various sizes and styles.

“We have tweaked many of the European designs for the American market,” said Epstein, who estimates that sales for Le Coq NA could reach $50 million within five years.

The Castelbajac line is making its U.S. debut and these products are the same as those sold in Europe. The couture designer, known for his colorful, offbeat style, has had a partnership with Le Coq since 2003. This season the products include T-shirts and jackets with the names of different countries, inspired in part by the teams competing in the upcoming World Cup soccer tournament.

Prices for the core apparel line wholesale for about $15 for jersey Ts up to $45 for the fleece jacket, with average prices of about $30. The tennis offerings range from $20 to $60, and Castelbajac line has higher prices ranging from about $42 to $80.

Epstein has been assembling a design and global sales team, and the firm is putting the finishing touches on a new showroom 70 West 40th Street in Manhattan to showcase its new direction.

The iconic French brand dates back to the 1920s and is best known for its upscale tennis and soccer looks. It has had a rocky road in the U.S. under various incarnations and ownerships. For more than 40 years, Le Coq was owned by Adidas, which sold the brand to Brown Show in 1995 before that company sold it back in 1999 to a French concern that now runs Le Coq Sportif International and is based in Suasheum, France.

Le Coq is entering a crowded sector that includes performance brands such as Adidas and Nike, as well as sport lifestyle labels like Puma and Lacoste, and it also competes with retro brands including Fred Perry, Penguin and Le Tigre. The company is targeting distribution in better specialty and department stores, and some pieces have already been picked by Atrium and Nordstrom, Epstein noted.