Le Tigre may be classified as a "retro" brand, but Ryan O'Sullivan, president and chief executive officer, is only looking forward. 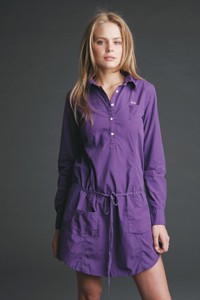 NEW YORK — Le Tigre may be classified as a “retro” brand, but Ryan O’Sullivan, president and chief executive officer, is only looking forward.

The line is in the midst of what O’Sullivan calls “a mandated evolution.” The affects started to become evident in March, when he poached Jenny La Fata from Sean by Sean Combs to be design director of the women’s and men’s collections, and infused both for holiday and fall with modern takes on the basic silhouettes for which Le Tigre has become known.

Having outgrown its home in the Garment District here, the company will move in July into new 14,000-square-foot headquarters at 149 Fifth Avenue. A month later, Le Tigre is to unveil its e-commerce Web site. The brand also is aligning itself with art projects and music groups and venues to target its core customer.

“We’re definitely taking it up a few notches,” O’Sullivan said.

La Fata said her objective was to reinvent the classics. “It’s still preppy, but it’s got more of an edge,” she said. “Our girl has the skater boyfriend and goes to Franz Ferdinand concerts, but she still has that socialite background.”

As a result, La Fata tweaked the collection so that polos are longer, jackets are shrunken and the color palette is cohesive.

La Fata introduced dresses into the collection, but managed to keep the price point relatively low. The wholesale range is around $38 for baby-doll-inspired dresses and woven shirtdresses.

Looking to spring 2007, La Fata said she was inspired by a “glamorized nerdiness,” so the classic Le Tigre polo will feature puff sleeves and a deep placket. The wholesale price range of the collection is between $18 for tanks and $98 for cashmere sweaters.

“Jenny’s ideas are consistent with my goal of bringing this collection forward and modernizing classics, but still keeping them traditional,” O’Sullivan said. Le Tigre is sold in about 800 U.S. doors, including department and specialty stores. In light of the brand’s refocusing, O’Sullivan said he slightly decreased the number of stores carrying the line so the brand can grow with existing accounts.

He expects wholesale volume of $48 million this year.

The company is in the final stages of signing licensing agreements in eyewear, footwear, accessories and outerwear in the U.S. and Canada, in addition to expanding distribution in the U.K., Scandinavia, Australia, Japan and Italy.

O’Sullivan is taking several steps to spread brand awareness. Billboards, wild postings and print advertisements will run in Nylon, Lucky, Teen Vogue and Complex magazines with the launch of each seasonal collection. Online advertisements will appear on Collegehumor.com and Gawker.com.

A college campus tour is slated to kick off in September, as are co-branding projects with punk and emo bands, and music venues and festivals.

Le Tigre also sponsored the printing of a photography book due out in late June called “re:vision,” the brainchild of New York photographer Chris Pieretti. The book features 16 New York City designers, actors and artists who were photographed doing their craft.

“I was looking for a sponsor who supported the arts and the scene, and [O’Sullivan] liked and supported the idea of independent and creative artists,” Pieretti said.

Le Tigre plans to celebrate the book’s launch with a party in July.

“We know who our consumer is and we catch them early,” O’Sullivan said. “We just create a sense of loyalty and they ride along with us.”