NEW YORK — It may be just a week before the New York runway shows are set to start, but designer Nanette Lepore has more on her mind than her latest ready-to-wear collection.

The designer, whose girlie creations will head down the runway... 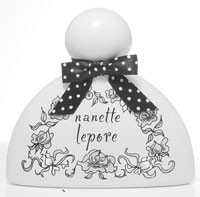 NEW YORK — It may be just a week before the New York runway shows are set to start, but designer Nanette Lepore has more on her mind than her latest ready-to-wear collection.

The designer, whose girlie creations will head down the runway the evening of Feb. 10, will also provide a sneak peek of her eponymous new fragrance at her show. (Those who haven’t scored an invitation will have to wait until the scent hits retail shelves in March.)

“Things are a little busy,” said the petite blonde designer, with a laugh, in an interview in her showroom Wednesday, glancing at walls covered with her uberfeminine designs — including a lineup of ginghams, fruit prints and embroidered dresses. “I’m probably not going to get much sleep in the next few weeks.”

Lepore has hardly made a career of sleeping. A one-time student of Spanish and social work at Ohio’s Youngstown State University, Lepore ditched that path for a course of studies at New York’s Fashion Institute of Technology. But there were early indications that fashion might be in Lepore’s future. As the nine-year-old daughter of a fashion-plate mother and an artist father, Lepore created her first couture look —?outfitting a neighbor in a gypsy print bedspread and making her stand out in the front yard with a hand-lettered sign reading “Lepore.”

After moving to New York in the Eighties, Lepore worked for several Seventh Avenue fashion firms before marrying her husband, artist Robert Savage. They opened a boutique on Second Avenue in 1989 called Robespierre —?“We got a lot of inquiries about robes,” said Lepore wryly — and Lepore set about creating her first lines.

While beauty is a new area for Lepore, she said she’s excited to be entering the business. “I’m fascinated by the beauty business,” she said, noting that she “wouldn’t rule out” expanding her beauty reach in the future, which could mean a foray into color cosmetics.

But for now, Lepore is content to focus on her first fragrance, which will enter a tightly edited lineup of specialty store doors, as well as the boutiques that carry her apparel, in March. In total, the scent will be available in about 200 U.S. specialty store doors, including Bergdorf Goodman, Saks Fifth Avenue, Neiman Marcus, Nordstrom and Sephora, as well as on sephora.com.

Adrian Ellis, president of Riviera Concepts — Lepore’s fragrance licensee — is planning the first scent to be just one of a Lepore portfolio. “First, we’ll build this business, but it’s likely that we will launch a second within the next few years,” he noted. The Toronto-based firm signed its deal with Lepore about a year and a half ago.

The juice, by Gianni Mastrocola from Ungerer and Co., has top notes of moonstone rose, white peach and white cranberry juices; a heart of magenta nectar, ripened black currant, orange jasmine and Persian lime juice, and a drydown of crushed velvet violette, amber and Indian sandalwood. Violet was a must for the scent, said Lepore, whose five-year-old daughter is named Violet.

For the packaging, Lepore had a vintage twist in mind. “I wanted something that would look good on a bureau,” she said of the bottle, which is in the shape of a half-moon. The front is adorned by a bohemian-inspired floral wreath with the Nanette Lepore logo centered within; the back of the bottle has a single rose, and a black bow with pink polkadots adorns the neck of the bottle. Outer packaging is pink with polkadots with a floral wreath, with a visual of a playful girl resting on the wreath of flowers. The eau de parfum bottles are blush pink, while the perfume’s bottle is black.

In addition to its U.S. doors, the scent’s international distribution, which could include doors in Europe and Asia, is expected to begin this fall. While none of the executives would comment on projected first-year sales or advertising budget, industry sources estimated that the brand would do about $5 million at retail in the U.S. in its first year on counter.

While national print advertising is not currently planned, a considerable sampling campaign — expected to deliver more than 500,000 samples of the juice and the hand cream —?and in-store appearances by Lepore are on the agenda.