PARIS — “When I talk about embroidery, I often say that we are illusionists. We manage to make you believe in things that don’t really exist: with three sequins, we create a ray of sunlight.”

So said Lesage art director Hubert Barrère, speaking on Tuesday at the preview of his exhibition with art gallery Maison Parisienne organized at auction house Artcurial. The master embroiderer is best known for his collaboration with Chanel: the Lesage embroidery atelier, founded in 1924, became part of the Chanel’s specialty atelier division in 2002.

But for this first solo exhibition, titled “Illusion,” Barrère wanted to step away from the fashion side of his craft to focus on artistry, linking embroidery to Greek mythology via the figure of Athena.

The seven pieces — five corsets and two headpieces — presented at the exhibition, scheduled to run from May 22 to 26 in tandem with the Métiers d’Art Biennale in Paris, required 2,500 hours of work to be completed by the 50 embroiderers at the Lesage atelier located in the Parisian suburb of Pantin. 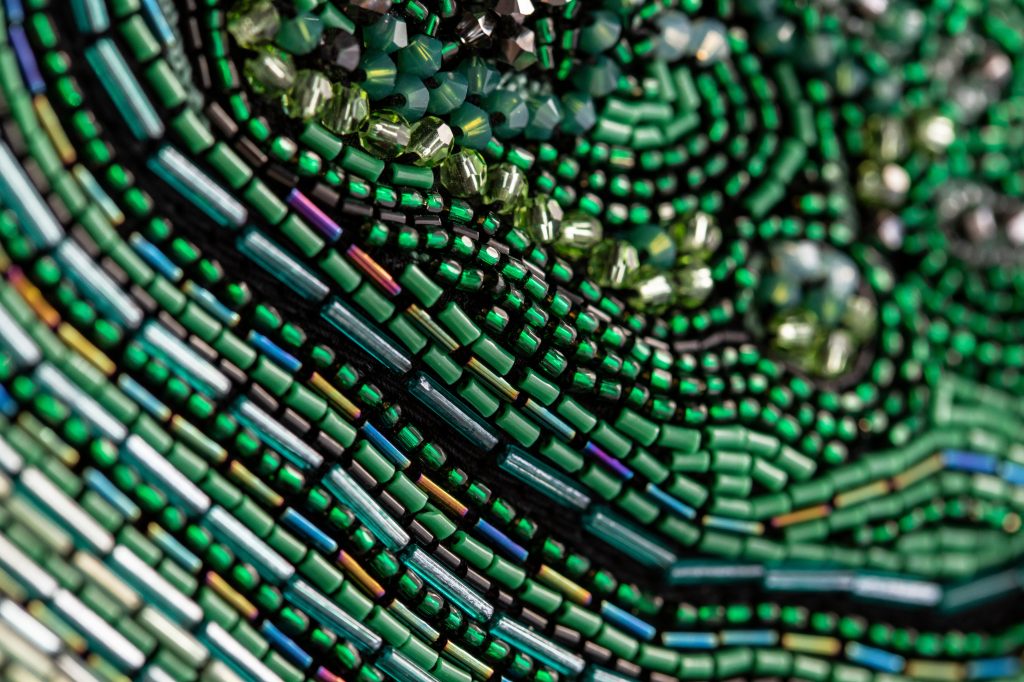 Details of the Medusa corset created by Maison Lesage.  Courtesy

One of the exhibition’s most spectacular pieces is a glimmering corset embroidered with green, black and bronze tubular glass pearls representing Medusa’s head, which was used as a shield by Greek goddess Athena. The piece totaled 800 hours of work.

“I’ve always been inspired by ancient mythology, but I recently learned that Athena, as well as being the protector of the city and its warriors, was also the goddess of artisans,” said Barrère, who was named artistic director of Lesage in 2011.

“Also her mother Metis was goddess of wisdom and magical cunning, which was fitting as embroidery is all about tricking the eye,” continued the art director, pointing out a tulle corset embroidered with an olive tree, its leaves made of organza petals and wood cuttings.

Further along, what looked like feathers on a larger-than-life owl-shaped corset turned out to be an intricate construction of sequins, strips of plastic and silk. The owl’s eyes, drops of resin in which two daisies picked from the atelier’s garden had been frozen, were created in collaboration with Chanel-owned jeweler Goossens. 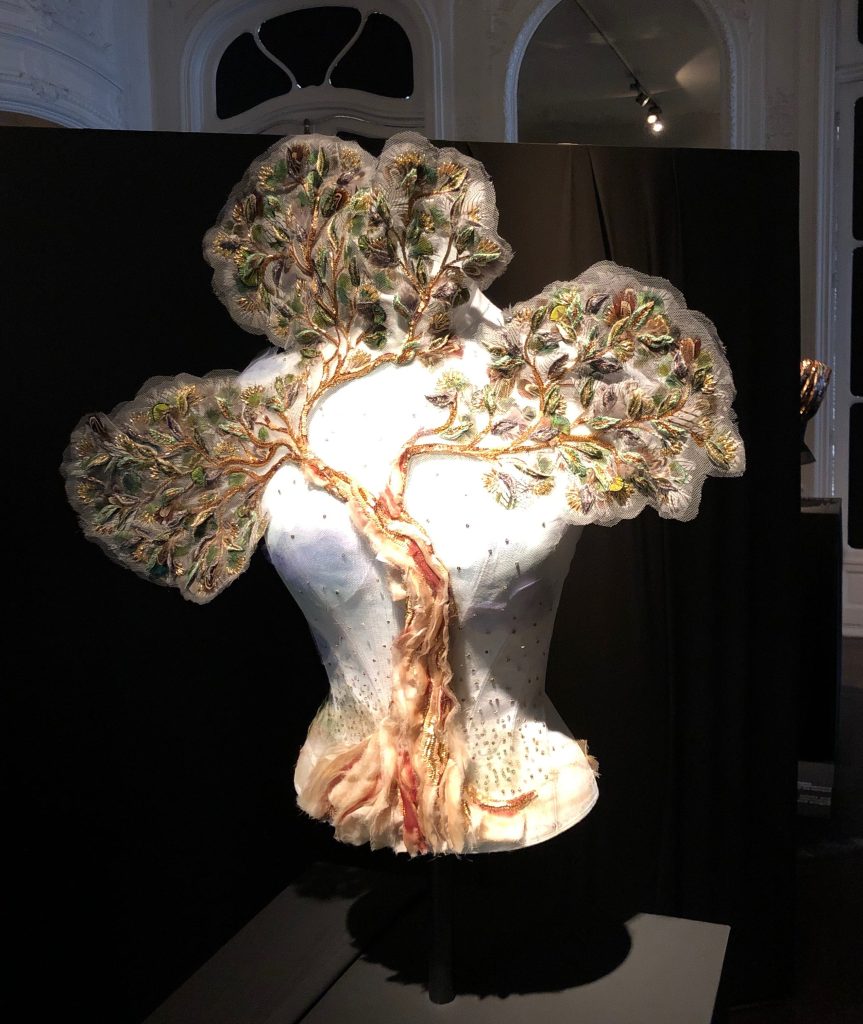 A glass case at the back of the exhibition unveiled a portion of the embroideries created by Lesage for the Chanel Métiers d’Art shows, including the golden Memphis-inspired motifs created for the Egyptian collection presented at the Metropolitan Art Museum in December 2018.

“It was important for me to have the exhibition be open to the public, as these techniques are still confidential,” Barrère said. “It stems from an old tradition: luxury houses weren’t keen on communicating about the artisans who worked for them. Nowadays there is a real shift: people are getting a lot more interested in ‘métiers d’art.’”

It takes more than 10 years to become an established embroiderer: five years of training followed by five additional years of practice to acquire speed and skill.

Despite this, Barrère has noticed a real rise in interest in embroidery, namely among the younger generations of artisans: three of Lesage’s most recent hires are young women who have switched careers to try their hand at embroidery.

“I love hearing them during fashion shows backstage,” smiled Barrère. “When watching a model on the runway, one of them will say to the other, ‘Look! That’s your sleeve!’ To the naked eye, it all looks identical, but they can each immediately spot their own work.”