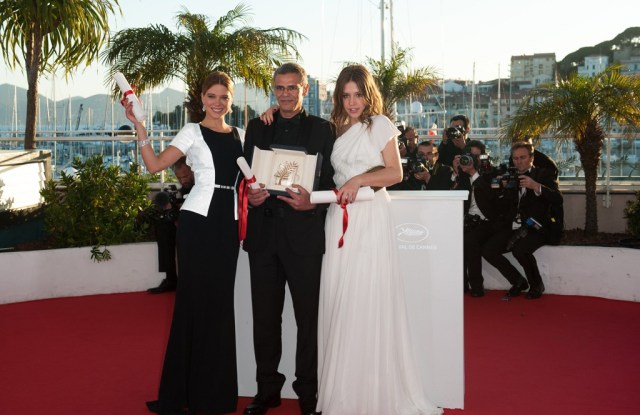 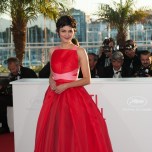 BLUE MOVIE: The jury of the just-wrapped Cannes film festival may have been headed by Steven Spielberg, but the Palme d’Or went to a film that is not your typical family-friendly fare.

Breaking with tradition, the award was presented jointly to Kechiche and the film’s standout leads, Adèle Exarchopoulos and Léa Seydoux. Exarchopoulos walked the red carpet in a white one-shouldered Gucci dress, while Seydoux opted for a sleek black-and-white Maxime Simoens gown and Chopard jewels.

Click Here to View Slideshow of the Best Looks From Cannes >>

In a press conference following the event, Spielberg described Kechiche’s film as “a great love story,” adding: “[It] made all of us feel privileged to be a fly on the wall, to see this story of deep love and deep heartbreak evolve from the beginning.”

Asked if the heated debate over the recent legalization of gay marriage in France had influenced the jury’s decision, he replied: “As you know, the characters in this film do not get married. Politics did not enter the room with us.”

Spielberg said that he expects the film will be well received in America, although he cautioned: “I’m not sure it will be allowed to play in every state.”

Bérénice Bejo, in a teal Elie Saab dress, won best actress for her role in Asghar Farhadi’s “The Past,” in which she plays a woman seeking a divorce from her Iranian husband. Bruce Dern won best actor for his performance in Alexander Payne’s black-and-white road movie “Nebraska.”