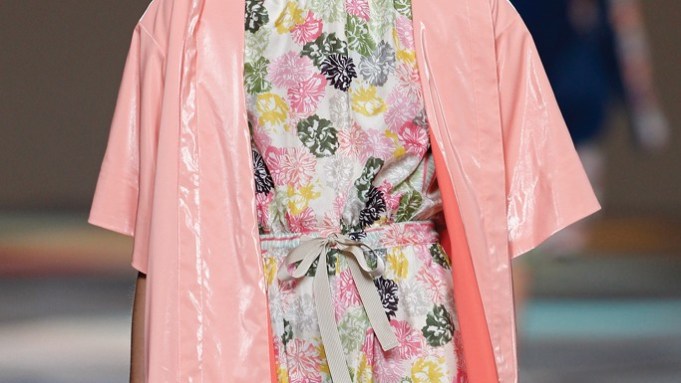 MADRID — Battling a second recession in three years, Spanish designers sent out less flash and embellishment at Mercedes-Benz Fashion Week Madrid because nobody can afford to make it — or buy it, they said.

Domestic spending from 2008 through 2012 dropped 12 percent, according to the National Statistics Institute, or INE, with a significant decline of 9.3 percent in the clothing and footwear sector. Even Inditex, parent of Zara and Massimo Dutti, felt the pinch, reporting first-quarter 2013 net revenues up just 1.4 percent.

With local media here suggesting “cracks of silk in the bubble,” designers claimed there is little chance the fashion sector will implode like housing or Spain’s recent bid for the Olympic Games. Modesto Lomba, president of the Spanish fashion designers association, ACME, and owner of the 25-year-old label Devota & Lomba, said, “We’re no worse off than any other domestic sector.” “Some will fall by the wayside,” he predicted, “but those of us that survive will be stronger because of it.” Brave words from Lomba, who suspended payments earlier this year with, to date, no potential buyers on the horizon. Nonetheless, he showed at fashion week alongside Victorio & Lucchino, favorites of the Duchess of Alba, and Sita Murt. All three are in various stages of bankruptcy.

The six-day Madrid event, which ended Sept. 17, featured 44 designers, including a group of 10 newcomers and a trio from Peru, this edition’s guest country.

With dates conflicting with London Fashion Week, only a handful of international buyers trickled in from Denmark, Mexico and Hong Kong, said a spokeswoman for IFEMA, a self-financed public consortium that organizes Madrid’s fashion-related events.

Teresa Helbig had one of the week’s more consistent statements as she opted for shorts, skirts, pants, jumpsuits and traditionally the brand’s featured item and best seller, dresses. Sweet summer frocks and silky gowns for night came in black and white with a Seventies vibe and girlish crocheted treatments.

Helbig’s commercial director and husband Chema Pare Monroy said the family-run Catalan label is 80 percent made-to-measure and 20 percent wholesale, including bridal. “We are very small [14 employees], with a philosophy of step-by-step growth” that includes an embryonic flurry of export activity to Russia, the Middle East, Panama and, more recently, London.

Angel Schlesser worked mainly in white for easy, textured separates including cropped tops, skirts and a wider pant. He added a mix of all-size checks on below-the-knee dresses, flowers for one-piece dressing and python-printed gowns for night. The brand is on the move, said press director Anabel Martí, with a change of retail location earlier this month — to a 1,400-square-foot space on Madrid’s Callejón de Jorge Juan in the luxury shop-heavy Salamanca area and the simultaneous opening of a showroom on Milan’s Via Savona. Stella McCartney is said to be eyeing Schlesser’s previous locale. Currently, Schlesser sells through five company-owned stores and two franchise operations in Spain, plus select corners in El Corte Inglés. In addition, Martí confirmed continued growth for the designer’s fragrance business in such markets as Russia, the Middle East and Asia.

Roberto Verino laid off the frou and feathers in favor of trim little jackets and shorts in raffia; skirts and skinny pants under the Galician designer’s signature three-quarter-length trenchcoats; jungle florals and mix-and-match animal prints for long fluid gowns, and turbans. There also were double-breasted men’s suits in white and navy blue linen by Madrid manufacturer Fuentecapala.

The Muñoz twins, Aitor and Iñaki — co-owners of Ailanto, a Catalan women’s label with international accounts in the U.S. and Japan — tapped into a casual-chic concept inspired by Brazilian artist Roberto Burle Marx. It was a singular take on femininity, exclusive abstract and floral prints, geometrics, texture, tropical colors and softer shades of mint green, pink and peach — and like everyone else here, black and white. There were lots of shorts and cropped pants, jumpsuits and rain jackets in plastic-coated cotton, and longer-length dresses.