There were fewer names on this year’s schedule, but new brands — many with a minimalist aesthetic — had buyers buzzing in Sydney.

By Patty Huntington on May 23, 2019
View Slideshow 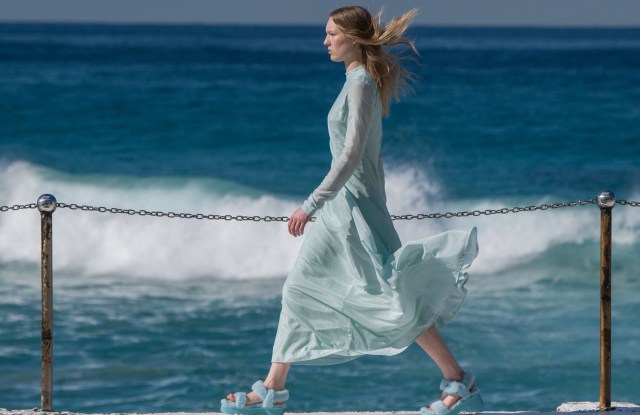 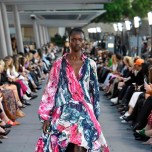 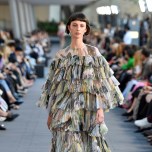 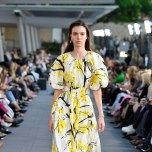 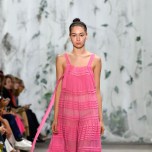 The event, which wrapped in Sydney over the weekend, attracted a small but influential contingent of international buyers — a number of them now MBFWA regulars, in part due to the event renaming itself in 2016 from its original spring focus to being a resortwear-dedicated collections showcase.

At 32, the number of shows and presentations on the schedule was down 18 percent from 2018 and some lamented the lack of support of the event from big local names like Dion Lee and Zimmermann, which now show in other locations, including during New York Fashion Week.

But an injection of new names and some spectacular off-site show locations got buyers talking.

This year, the latter included the historic, harborside precinct of The Rocks; both the north and south ends of Bondi Beach — with the Ten Pieces front row seated on the floor of the drained Bondi Icebergs swimming pool — and the Chinese Garden of Friendship in Darling Harbour, the location for Double Rainbouu’s walk-through presentation.

“We’ve seen some fantastic presentations in terms of formats and locations and for any of the international buyers who come here, it really feels very immersive to understanding what the city culture is like,” said Lisa Aiken, fashion director at Moda Operandi, which works with 14 Australian brands.

Beginning Friday, Moda Operandi will launch 18 stand-alone Australian brand trunk shows based on Aiken’s selections from this year’s MBFWA, including her top show picks such as Michael Lo Sordo, Christopher Esber, Matteau Swim, Bondi Born and Anna Quan, plus a curation of the best of Australian fashion week, which will include additional products from other brands.

“The fact that Matteau and Bondi Born were two of my favorites really speaks to what is going on here from a resortwear perspective — it’s resortwear for a more minimal girl, that beautiful color palette,” said Aiken of both brands’ collections, which featured minimalist silhouettes and styling and earthy tones.

“I think Sydney has a major spot on the [buying] calendar,” she added. “This season there was Matchesfashion.com, Browns, Net-a-porter, myself at Moda, Farfetch, Saks [Fifth Avenue]….There were a lot of international buyers here, that’s not an easy thing to achieve. We’re not taking time out from our resort planning schedules, we’re not doing it for fun, we’re doing it because we believe we’re going to find something here. And so I think that in terms of an element of discovery and being a platform for emerging talent, that wouldn’t necessarily get the same showcase in an international fashion week, I don’t think that’s going anywhere. Far from it.”

Two emerging swimwear brands that were each established in 2015 and made their debuts on the schedule this year, Matteau Swim and Bondi Born were at the top of most buyers’ highlights lists.

Both brands have fashion magazine connections: Matteau cofounder Ilona Hamer is a stylist who has worked with Vogue Australia, Russh and Unconditional magazine, while the new creative director of Bondi Born, Karla Clarke, who is also a stylist, is the former fashion editor of Harper’s Bazaar Australia. The latter joined Bondi Born founder and chief executive officer Dale McCarthy in December.

“Definitely Matteau and I really liked Bondi Born as well — it was very chic and wearable, not your typically really sexy swim,” said Browns ready-to-wear and resort buyer Holly Tenser.

She added, “A lot of brands were doing really beautiful neutral color palettes, which is something we’re seeing a lot of in the other markets for spring. And I quite liked the Australian take on it. I thought there were some really nice retro prints and paisleys. There was a fair bit of maxi-length in skirts and dresses, also quite a lot of crops, but not in a young way, in a more elevated way.”

L.A. transplant Jonathan Simkhai made his mark at the event with a presentation outside the North Bondi Surf Life Saving Club at sunset — echoing the fading pastel skies over the Pacific in a striking ombré finale series.

“Jonathan Simkhai was amazing — I feel like he really took inspiration from the city here and just to see him outside of his element and then design pieces that resonate with the Sydney customer, but it was also very Los Angeles and California, it was so beautiful,” said Revolve senior buyer Cori French, who also liked the mixed pastels, animal prints and silk sets on the week’s other runways.

Of the latter, she noted, “So whether it’s like a bias-cut skirt and maybe a matching cami for a monochromatic look or also maybe a pajama shirt with little shorts and wide-legged pants — I feel like I saw that a bunch in the street style here and then also in the shows. And a trend that really surprised me was head scarves. I hadn’t seen that much before.”

Revolve carries around 20 Australian brands, including Zimmermann, Alice McCall and Bec + Bridge and newcomer Leo + Lin could soon be joining them. The brand’s collection of lace party dresses and prairie dresses in vibrant florals was French’s favorite MBFWA show.

“All of it,” said Power, of what she plans to buy from the latter, which showed resortwear for the first time. “I thought it was really, really strong and not like anything that we have. Two years ago they were just a rail of swimsuits and bikinis, black, khaki and maybe mustard and that was it.”

“Australian brands really embrace these [sandals] with flat styles, which is a new update to the midheel strappy versions we have seen dominating,” she said.

Launched in October, Bondi-based minimalist leather sandal brand Studio Amelia is among a number of Australian footwear lines to emerge in recent years.

“I’ve never really thought of Australia as having a strong accessory market, but there are two [footwear] labels I’m definitely interested in — Mara + Mine and Studio Amelia,” said Aiken.

“[Studio Amelia] is like a true city flat. I think it’s very easy to find a flat sandal that is beachy, but it’s very difficult to find something that feels slick and that you want to wear in the city. And Mara + Mine has been around on a lot on girls. All of a sudden it’s like osmosis. You see it being worn around and I’m like hunting people down to ask where they got their shoes from, because I want to work with them on Moda in the most immediate capacity,” she said.