Construction rigs in the greater Houston metropolitan area are whirring, particularly for the retail market, where some 5 million square feet of new space valued at $700 million will be completed this year.

By Rusty Williamson on May 15, 2008
View Slideshow 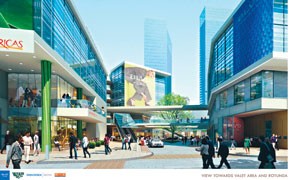 Construction rigs in the greater Houston metropolitan area are whirring, particularly for the retail market, where some 5 million square feet of new space valued at $700 million will be completed this year.

Almost 75 percent of the space is committed to major retailers, a 24 percent increase over 2007, according to Ed Wulfe, principal and founder at Wulfe & Co., a Houston-based retail real estate development and consulting firm constructing the new BLVD Place, which will include 500,000 square feet of luxury and lifestyle retailers and restaurants, anchored by an 80,000-square-foot Whole Foods flagship, 250,000 square feet of boutique offices, hundreds of high-rise residential condo and rental units and a five-star luxury hotel.

With more than 143 million square feet of shopping center space in more than 2,200 centers, retail sales in Houston continue to grow 5 to 7 percent a year.

Retailers noted little price resistance and the growing appetite for lifestyle fashions stimulated by local residents’ global travel and visits to second (and third) homes across Europe and Asia.

“The Houston fashion customer is savvy and sophisticated and wants luxury and value. Women walk in and expect to find something each visit they just can’t live without, and we shop hard to find the best products anywhere in the world. Our customers travel the globe,” said Calli Saitowitz, owner of the two-unit BB1 Classic stores in Houston.

“As Houston continues to grow, we have watched our high-end fashion business grow as well, with many new corporations bringing high earners to the area. That means lots of new millionaires. And that in turn makes realtors very happy,” added Saitowitz. “Many of our customers are involved in local civic and cultural causes, and Houston is a city that loves to party and eat in the latest as well as the classic restaurants.”

Rachel Clements expanded her La Mode Lingerie designer swimwear and innerwear store last year, and the development is paying off with sales up more than 60 percent.

“My existing customers are spending more and we’re also attracting lots of new shoppers, thanks to the city’s growth and our marketing and advertising campaigns,” said Clements, noting customers may buy up to five Chanel or Eres swimsuits at a time, at prices from $300 to $650 a suit, and innerwear like a La Perla bra at $250.

Penne Weidig, buyer at Tootsies, noted the store enjoys business from an array of international customers.

“Houston is a very social city and women still like to get dressed up for events. If they are cutting back on spending, it is in more basic items, not on special occasion clothes. Because Houston has an oil-based economy, we have not been as affected by the economic slowdown as other cities. We have a good amount of international customers because of the incredible medical centers here.”

Houston retail sales in the third quarter of 2007 spiked to $20.1 billion, up 6.1 percent from $19 billion in the same period in 2006. More specifically, there were 6,047 clothing stores selling $860 million worth of merchandise in the third quarter of 2007, up 2.9 percent from when 6,000 stores sold $836 million worth of apparel in the same period in 2006, according to the Texas Comptroller of Public Accounts.

“The Houston retail market continues to be very healthy in 2008, with over 5 million square feet of new retail construction expected,” said Alan Shor, a founder of The Retail Connection, a Dallas-based retail development and consulting firm that recently added an office in Houston.

“The unique aspect of retail here continues to be understanding each trade area and how people move through the area as it relates to site selections. Houston is a complex and diverse market. Locating a block or two from the right spot could have significant consequences for a retailer,” said Shor.

New jobs, corporate growth and relocations to Houston create a trickle-down effect, Shor added. “Job growth creates home sales, creates retail demand. While a few retailers are slowing expansion plans across the U.S., Houston continues to see retailers expanding. Since retailers still need to grow, many are simply shifting their capital plans to Texas and to Houston, where population and job growth continue to be strong.”

“Houston is an island of vitality with solid job and population growth and a very low cost of living,” said Wulfe at Wulfe & Co. “While no city is recession-proof, there is little talk and very little evidence of any recession in Houston. It’s not in our vocabulary.”