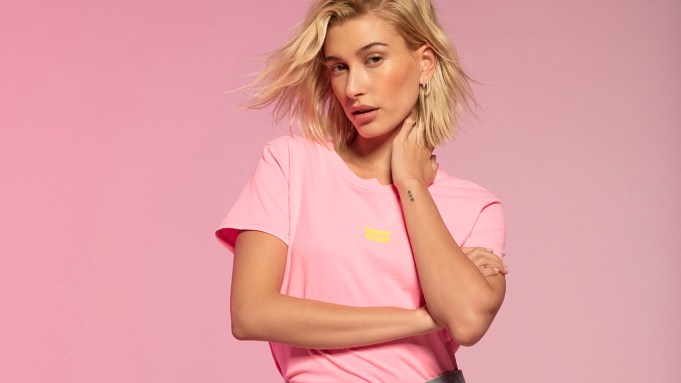 The American denim giant, which launched its initial public offering on March 21, sending shares soaring, has tapped the model/influencer as the first face of its most iconic product, Levi’s 501s. The Hailey Bieber for Levi’s 501 campaign launches today, just ahead of festival season, and will continue to roll out through May 20 to mark the date when the original riveted blue jeans were patented 146 years ago.

Campaign images feature Bieber wearing Levi’s styles she has customized with her name and hints of neon, including the original 501, the 501 skinny and 501 shorts.

“I’ve been wearing 501 cutoffs since I can remember..they make me feel like me,” said Bieber, who confessed that the first pair of Levi’s she ever had she stole from her dad. “I still wear them today.”

“Hailey has been wearing our icons, Levi’s 501s and 501 shorts and trucker jackets, without us having to ask her to. She’s a real authentic fan,” said Jennifer Sey, chief marketing officer of Levi Strauss and Co. Indeed, shortly after marrying last fall, she made headlines for wearing an oversize Levi’s trucker jacket customized with the name “Bieber,” confirming the news.

Represented by IMG Models, Bieber, 22, has walked in runway shows for Moschino, Tommy Hilfiger, Tory Burch and Dolce & Gabbana, among others, and has been featured in campaigns for Ralph Lauren, Karl Lagerfeld, H&M and Ugg. Her father is actor Stephen Baldwin, a brother of actor Alec Baldwin.

The campaign is a full-circle moment for the model. It was shot by Hollywood stylist Karla Welch and her photographer husband Matthew Welch, who together run the L.A.-based creative agency Meritocracy. Welch had her own high-profile collaboration with Levi’s last year, the Levi’s x Karla 501 Day Collection, with all proceeds going to Everytown for Gun Safety. She put her own spin on six brand classics, and launched them with a Meritocracy-produced portrait series featuring a constellation of stars, including Hailey Baldwin (before she was a Bieber).

“I was so proud to be part of that campaign,” Bieber said.

The stylist also has a long relationship with Justin Bieber, whom she has styled onstage and off, and also tapped to model her Hanes x Karla collection of T-shirts.

“Karla has been an amazing collaborator,” added Sey of the stylist, who also works with Elisabeth Moss, Tracee Ellis Ross, Sarah Paulson and more. “She’s focused on authentic self-expression…So there is this alignment of values of what we’re trying to provide to our customers. And her husband Matthew has the ability to do the same with the content he creates, which is to capture what a person is about.”

“The 501 is the embodiment of Levi’s’ democratic principals…It’s worn by minivan moms in the suburbs and hipster kids in cities and everything in between,” said Sey. “It never felt right before but we love Hailey’s energy and optimism. It felt like the right time to associate a face with 501.”

The announcement comes on the heels of the brand’s successful IPO. “Our ceo, Chip Bergh, said it best: ‘This is not the finish line, it’s a new starting line,'” said Sey. “Everything we’ve been doing has been working — this just gives us confidence to lean into it a little more. It doesn’t change much, except we have additional capital to accelerate our growth. What’s worked is intense focus on product, denim leadership, and rounding that out with logo Ts, trucker jackets and other fashion styles; leading with our values, and surrounding ourselves with marketing that puts us at the center of culture.”

As part of the campaign, Hailey Bieber will be traveling to Levi’s Tailor Shops in the U.S. for customizing events, starting at the Coachella Valley Music and Arts Festival, where the denim brand will host its annual poolside brunch for the fourth year, on April 13, with Snoop Dogg, St. Vincent, Heron Preston and others expected to attend.

“It’s still one of those center-of-culture moments where you have youth culture, the best lineups and acts, and so much style and music converging on the desert,” said Sey of Coachella’s fashion-marketing value. “We do festivals all over the world but this is the biggest and best.”