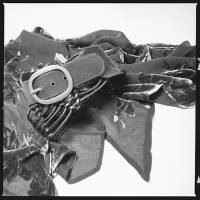 While many large fashion firms spent the last two decades aggressively branding their names across a host of categories, Ellen Tracy has taken a decidedly controlled approach to the licensing game.

The company now has six licenses — legwear, footwear, scarves, eyewear, belts and beauty — which have been added slowly over the last 16 years. In every licensing venture, design director Linda Allard plays a key role in coordinating design and direction.

“Linda is extremely hands on,” said Elaine Gold, owner of Collection XIIX Ltd., which has held the Ellen Tracy scarf license since 1986. “If you take a look at our accessories, you know it is the same hand as the apparel line.”

Daniel Friedman, owner of Daniel M. Friedman & Associates, which holds the belt license, said, “Linda approves everything. She works closely with us to ensure that everything works together.”

While licensing has been a somewhat small piece of Ellen Tracy’s overall business — licensing royalties account for about 1 percent, or $1.7 million of total sales of $171 million, according to company executives — these businesses are likely poised for more significant growth, now that Ellen Tracy is owned by brand-building giant Liz Claiborne Inc.

When the deal was finalized earlier this month, Paul Charron, Claiborne’s chairman and chief executive officer, said one of his priorities is to build Ellen Tracy’s non-apparel categories, especially areas such as costume jewelry, handbags and fashion accessories.

The brand’s licensing business will now be overseen by Barbara Friedman, Liz Claiborne’s president of licensing. She will work in conjunction with Howard Rosenberger, Ellen Tracy’s executive vice president, and Betsy Burbank, who has been overseeing licensing.

“We have been very particular about what products we license and who we license the brand with,” Rosenberger said in an interview. He said it’s a bit “premature” to discuss specifically what products will be added, but said, “We base our decisions on what is right for the brand and what will enhance the brand. We are interested in building this area of our business and we want to add things that will complete a total wardrobe.”

Rosenberger said he “can’t imagine” a time when Allard wouldn’t be actively working with the licensees. “She will be involved as she has always been,” he noted.

Although there are only six of them, the current licensees cut across a wide swath of product categories chosen to assert the company’s identity as a lifestyle brand. Collection XIIX was Ellen Tracy’s first license, having teamed up with the company in 1986. The scarf offerings now includes plenty of chiffon and burn-out scarves, as well as floral prints, and there are daywear options as well as an evening wrap line.

“We match the materials with what Linda is doing,” Gold said. “If she feels soft, we go to chiffon. If she does hard, we will use luxurious twills.”

Legwear, meanwhile, is done by Danskin’s Pennaco division, and is overseen by Barry Tartarkin, Pennaco’s vice president and general manager. While Ellen Tracy has had a few different legwear licenses in the last decade, Tartarkin has been the link since he signed the initial deal and the license has followed him as he has changed firms.

“Ellen Tracy represents very high quality, salable fashion in legwear,” said Tartarkin. “Linda has been wonderful to work with. We got a lot of design direction from her which helps us stay on trend and keep the collection moving forward.”

The legwear collection consists of tights and socks, including trouser styles, which carry retail prices of $6 to $25. The line includes casual and luxury styles, and has materials such as spandex and bouclé, and there are also some novelty items, including pastel peds with stripes.

The belt collection, meanwhile, consists of a wide range of products, including styles with braids and fringe, and extra-wide looks. In total, the line has about 25 styles under both the Ellen Tracy and Company Ellen Tracy nameplates. Belts are one of the newer licensed categories, having bowed at retail this past spring. The belt line retails for $38 to $125.

“We are using a lot of Italian leather and the looks are very sophisticated,” Friedman said. “Belts are an item business now. Many of the Ellen Tracy looks are trend right — it’s not a basic line.”

Ellen Tracy has had a deal with Viva International Group for eyewear since 1998, and the line features both optical and sun styles, ranging in retail prices from $50 to $190.

The beauty offerings are produced under license by Cosmopolitan Cosmetics and include a range of products, such as fragrance, bath soak, shower gel and body lotion, the bulk of which retails for less than $100.

“We have tried not to over-launch and instead have taken our time developing the collection,” said Michael Forster, senior vice president of central marketing for the Ellen Tracy division of Cosmopolitan.

He said the company plans to add more products in the future, but he declined to name specific items.

Footwear, meanwhile, is produced under license by GFW Group. The line consists primarily of dress styles, including sandals and mid-heel styles made of materials such as leather, satin and linen. The collection carries retail prices between about $100 and $200.

“We have had the license for a year-and-a-half and have found that stores are really receptive to it,” said Ian Wright, president at GFW Group. “We offer lifestyle footwear, but we don’t get into sneakers.”