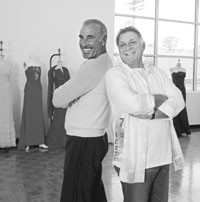 They share April birthdays in the same year — Schwartz, all of three days older, celebrates his on the 25th.

Not exactly opposites, but definitely complementary souls as 50-50 partners in A.B.S. by Allen Schwartz. They bought back the company from Warnaco Group Inc. in New York for $15 million in cash and $2 million in assumption of liabilities last November.

The two say they are forging a new era at the 22-year-old company based here, with a focus on expansion of the licensing program and broadening the distribution base.

To wit, they’re both managing directors, and even having titles at all, Schwartz said, is “old school.” Day-to-day, he oversees the product and design direction, while Marciano manages operations, including production, distribution, retail and licensing.

And the pair are enthusiastic about their heady plans to develop the label — on track to surpass $50 million in sales this year, a 30 percent rise from 2003 — into a megabrand with $500 million in sales. It was a move made not a moment too soon, according to Schwartz.

“I feel like a load has been lifted off my shoulders,” Schwartz said recently in his office in downtown Los Angeles.

Warnaco director of investor relations Deborah Abraham declined to comment on the relationship with A.B.S., except for “wishing [the partners] all the best.”

Under Warnaco, A.B.S. rolled out its first in-house ad campaign, shot by Mario Testino, in Vogue, Elle and Vanity Fair. But plans for young contemporary and footwear lines stalled when Warnaco declared bankruptcy in June 2001, less than two years after then-Warnaco chairman and ceo Linda Wachner swept up Schwartz’s $40 million company for a reported $30 million to $40 million.

“The turnaround group came in and negativity hit,” Schwartz recalled, noting sales dropped 20 to 30 percent during the ordeal. “We got roughed up.”

At the time of the Warnaco bankruptcy, Schwartz said he had to morph into a crisis management exec as vendors grew concerned about future payments.

“Everybody was nervous about shipping to us and I had to deal with their concerns. I told them I’d make sure everyone was paid — and all 39 of my contractors got paid.”

He doesn’t blame the situation on Wachner, whom he called “the best brand builder in America” at the time of his sale to Warnaco. “It was a Warnaco issue,” he insisted.

Indeed, industry observers say it was an unusual circumstance.

“It was bad luck for Allen,” said Mark Vidergauz, managing director of investment banking firm Sage Group LLC, whose company has brokered deals between Liz Claiborne Inc. and Juicy Couture, and Quiksilver Inc. and DC Shoes. “One of the things you need to do before you merge with a company is assess them and do your due diligence. Most of the time this doesn’t happen.”

Enough was enough for Schwartz, even after Warnaco emerged from bankruptcy in February 2003. By summer’s end, along came his apparel knight in the form of Marciano. The two met through a friend about nine months ago at a Beverly Hills cafe. Schwartz was looking for more than an investor.

Marciano was looking to get involved in something new. He took medical leave from Guess in November 2002 after his doctor informed him he was at risk for a heart attack. Last May, he formally retired from his position as senior vice president, in which he oversaw the company’s stores, distribution centers, production and customer service.

It took only three meetings for Schwartz and Marciano to seal the deal. “It was perfect magic,” Marciano said, noting his brothers, Maurice and Paul, still running Guess, gave his new venture a “thumbs-up.” “The chemistry was there; we connected,” Schwartz added.

Since Marciano’s official arrival at the downtown A.B.S headquarters Jan. 31, product shipping has doubled by his move to centralize departments. Until now, the company hasn’t had any distribution abroad. It recently signed agreements for Australia and England, and has its eyes on Europe and Japan.

Licensing, in fact, is the new growth engine for A.B.S. Once invisible at the company, except for a dress deal with Chorus Line that Warnaco ended, it now “represents the biggest part of our expansion,” Marciano said. He ticks off a long list of possibilities: Suits, outerwear, watches, hosiery, children’s and young men’s, along with junior knitwear, denim and woven tops. Four or five deals are expected by yearend.

The biggest volume driver, both believe, is in young men’s clothing priced at less than $100 at retail and targeting the Nautica customer. They see a clean, contemporary-styled line of separates that can mix with other brands and genres — mirroring the way teens shop.

A.B.S. peaked at 1,500 doors in 2001, but Schwartz said he began scaling back distribution, limiting it to core and better accounts.

But the partners see possibilities in beefing up its penetration in more doors at its existing department store accounts, as well as breaking into key denim boutiques nationwide. Just through more doors, they said, the wholesale business can bump up by $150 million to $200 million.

Signature retail expansion is last on their list. They have a total of five freestanding stores, in New York and the Los Angeles area, down from seven a couple of years ago. Joint ventures are a possibility, but they haven’t laid out any concrete plans.

Schwartz said the company is even toying with the idea of a restaurant business.

“Down the road, I can see an A.B.S. Cafe,” said Schwartz, who has a penchant for incorporating his name in every division — particularly when it comes to promoting himself during award season with his knock-off frocks from the Grammys and Oscars, turned around posthaste.

“My name is well known and there’s value connected to it,” he said.

Looking back, he said he doesn’t regret selling the company. It was the natural progression for his firm, which he had built into a promising contemporary brand, except for a stumble when he shifted to the bridge market in the early Nineties (“I had my head handed to me,” he now jokes).

“They do an extraordinary job of covering the trends,” said Suzanne Silverstein, divisional merchandise manager of contemporary sportswear and day and evening dresses at Saks Fifth Avenue. “If it’s animal print, they’re on it. If it’s tweed, they’re on it. They’re on trends that come from the runways before anyone else.”

Now that the company is back under the control of its founder and a veteran partner, Silverstein said Saks executives have noticed a positive difference in the company: “[Schwartz] is very focused on the product now in terms of quality and design.”

A.B.S. prides itself on its domestic production (except for cashmere sweaters made in China), giving it rapid-fire response rates to retail needs. While a number of contemporary vendors have begun sourcing overseas, Schwartz said he plans to stay domestic — except for licensing deals that will require offshore production.

With a new co-pilot and a plan of sustained growth, A.B.S. is where it belongs, Schwartz said. “I have my life back, my environment is positive and I love going to work again.”