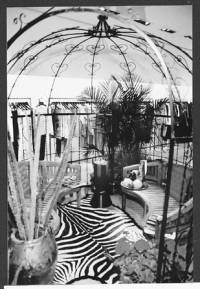 When Neiman Marcus hosts its 95th anniversary gala in November in Dallas, it’s safe to say that the guests should expect the unexpected.

According to Ken Downing, the company’s vice president of corporate public relations and fashion presentation, the party for 1,400 people will be “a return to gold and Roccoco, very Diana Vreeland, very Chinoiserie, with a little Billy Baldwin thrown in.”

Oh yes, and there’ll be a mink-clad Santa and the Radio City Music Hall Rockettes.

Welcome to the World According to Downing, the Neiman Marcus style guru who’s behind some of the most talked-about parties in Dallas retailing.

He has transformed a Dallas store into an approximation of Diane Von Furstenberg’s Manhattan loft, recreated Roberto Cavalli’s fall fashion show in the couture salon of the Los Angeles store and brought Tom Ford’s runway production for Yves Saint Laurent to the downtown Dallas store, where the carpet was specially dyed the exact shade of black orchid that appeared in Paris.

Downing-commandeered events are designed to stimulate all five senses, with exciting foods and drinks, live music and a lot of beautiful men and women (“A little eye candy never hurts,” he noted).

Although Downing is hard-pressed to name his favorite party ever, he was pleased with the star-studded June fashion show for Roberto Cavalli on the second floor of the Los Angeles store. Five hundred guests ogled the designer’s fall collection beneath the same chandaliers that hung over the Milan runways.

Another section of the store was transformed into a vision of decadence, with opium-den day beds, velvet sofas, fur carpets, sliced figs and candles everywhere. The party for Diane Von Furstenberg at Neiman’s North Park store was another example of vintage Downing. The designer has a dove named Fidel, so in came numerous cages of live doves.

“Nobody does parties like Neiman’s, and it’s because of Ken,” said Holly Moore, editor of the PaperCity group of Dallas fashion/society magazines, who has worked with him on eight parties. “It’s such an experience from the time you walk in the door.”

Neiman’s parties, formerly elegant but rather staid affairs, have, over the past five years, drawn a young and hip crowd as well as the usual run of socialites and well-heeled matrons. As a result, Downing is helping the retailer broaden its appeal beyond its core mature customer to the younger buyer.

“He’s bringing younger people into the stores,” said Moore, who called him a “breath of fresh air.”

These younger buyers are an imperative growth market for luxury retailers like Neiman’s, whose couture customers are aging and whose sales have suffered in tandem with slumps in the economy.

“It’s an important part of their marketing strategy,” said Stacy Turnof, a retail analyst for Merrill Lynch. “This is where they can show the customer the new designer merchandise.”

“There has been an interesting shift in the market,” Downing said. “Younger people want to be perceived as being more mature. And we’re seeing a mature customer who wants to be a little more on the edge. ”

Downing supervises a staff of 13 people in Dallas, as well as the public relations managers, assistants and visual staffs at each of the company’s 35 stores. Downing’s fingerprints are on most of Neiman’s parties, be it an intimate champagne reception, a fashion show or a charity gala for 1,400 people.

He estimates he personally oversees as many as 100 parties a year. This year alone saw fetes for Gucci, Giorgio Armani, Stephen Dweck, St. John’s, Escada, Bill Blass and Chanel, among many others.

“Somewhere in America, there is a Neiman Marcus party as we speak,” said Downing, who joked that he lives on American Airlines, returning to Dallas only to do his laundry.

Depending on its scope, putting on a Neiman Marcus event can involve the efforts of more than 100 people, from caterers to florists to models. Some events are planned eight months ahead, while others can be pulled together in a matter of weeks “as long as there’s time to get the invitation out,” he said. (Downing would not, however, reveal how much the parties cost.)

Ultimately, Downing believes the company’s events translate into sales by getting customers excited about designers and their collections.

“We see it in the numbers,” he said. “It’s why we continue to do events. It’s great to entertain customers. But at the same time, business is business.”

Downing is hard to miss. At an impossibly thin 6’4″ and impossibly thin, with a mop of (currently) blond hair that seems to change style monthly, the 39-year-old public relations whiz typically speaks in witty sound bites. And he never drives — he gets driven.

“He was more like a circus performer than a human being,” said Mike Thompson, owner of Sticks & Stones Garden Market, which often provides flowers for Neiman’s parties. “I thought there was no way a person could be this over-the-top grand.”

To say he is obsessive about his parties is an understatement. He checks and doublechecks every detail, refolding every napkin to his liking and making sure all the tablecloth seams are aligned.

Downing, a Seattle native, believes he was fated for his career. He was coordinating his mother’s wardrobe from the time he was seven and designing clothes when he was nine. His mother taught him at a young age that every party should be a memorable event. He remembers a birthday celebration she threw for him when he was six. It had a fish theme, right down to the goldfish each child was given as a party favor. “It was instrumental in shaping my event ideal,” Downing said.

Downing studied fashion design in Seattle and New York. His first retailing job was with I. Magnin, where he held various creative positions in visual planning and fashion.

He has risen quickly since joining Neiman Marcus in 1989, where he first served as fashion coordinator in the high-volume Los Angeles store. He came to Dallas in 1995 as creative director for visual planning and presentation, and moved into public relations in 1997.

Downing believes every party should have three elements — a Jacqueline Kennedyesque elegance and appropriateness; the sense that everything was created and cooked by hand, and a feeling of flamboyance and decadence.

“If all three come together, you can throw a fantastic party,” Downing said. “It’s about balance. Remember, too many accessories can kill a great outfit.”