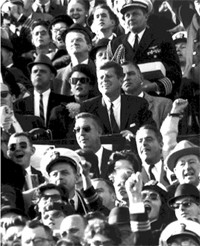 Decades before his portraits would redefine sports photojournalism, he joined the Henry Street Settlement’s camera club — just another kid trying to keep off the streets of the Lower East Side. Weekends were spent using borrowed cameras and shooting family and friends, or animals at the Bronx Zoo. Despite his humble start, Leifer went on to prosper in a 40-year career, capturing the great names in the Olympics, horse racing, professional football, baseball, boxing and golf for Sports Illustrated, Time and Life magazines — not to mention other famous people of the day in film, politics and current events.

“I didn’t have a clue that photography was something you could make a living at,” he said. “I was a little Jewish kid. I was supposed to be a doctor or lawyer, but not a photojournalist.”

His Midtown apartment is covered with his images of his famous subjects — Muhammad Ali, Secretariat, Bear Bryant and Carl Lewis. As a sendoff at the end of a shoot, he often asks to share the frame with them. Those more candid shots — Leifer sparking up a stogie with Fidel Castro, riding a camel near the Pyramids in Egypt or shouldered between Clint Eastwood and Burt Reynolds — hint at his disbelief about his good fortune.

This week, St. Ann’s Press publishes Leifer’s 11th photography book, “Neil Leifer: Portraits.” Action shots are synonymous with sports photography, but portraits of athletes during competition is where Leifer made his mark. Pages from the new book include Don King and Joe Frazier before “The Thrilla in Manila,” a bare-chested Mike Tyson cradling his six-week-old son in the dressing room after the Lennox Lewis fight, and a teary Florence Griffith-Joyner at the 1988 Summer Olympics.

Images from the book will be displayed in an exhibition of Leifer’s work, which opens here Nov. 22 at the Pop International Gallery in SoHo.

In the book’s introduction, Tom Brokaw writes, “Neil invites us along on a transformation of his work from action to inaction, from the exterior form to his subjects’ inner thoughts.”

Some of the book’s 100 photographs hint at a different time. Consider Arnold Palmer with a golf club in one hand and a lit cigarette in the other at the Thunderbird Classic, or another of President John F. Kennedy and Vice President Lyndon Johnson — wearing fedoras no less — at a game at Griffith Stadium. “I like to celebrate the subject, not the moment,” Leifer says.

“I always thought my mission was to do something worth looking at,” says Leifer. “I always liked subjects that made you look good.”

In Leifer’s eyes, Ali remains “the greatest subject that has ever lived.” The photojournalist shot the boxing champion more than any other athlete — for the first time in 1963 and most recently for the June edition of Esquire.

“He always had the right attitude. In this day and age, you have so many brats in sports and entertainment with the restrictions they put on shoots and interviews. Ali was always available not only to me, but to everyone. He never met a camera he didn’t like for starters, and he never met a writer or commentator he didn’t like either.”

Aside from the 15 Olympic Games he covered, Leifer shot numerous other sporting events, but favored the pageantry of horse racing and boxing — theatrics shared by his friend, LeRoy Neiman. Leifer, who has attended 15 Kentucky Derbies, said, “I used to tell people that the Kentucky Derby, which is held on the first Saturday in May, is usually the most beautiful day of the year, or the ugliest event imaginable on a bad day.”

Despite the repetitiveness of some of his assignments, his challenge was to look at the occasion in a different way every year. When Secretariat was favored to win the Triple Crown at the Belmont Stakes in 1973, Leifer took a chance and positioned himself on the track’s infield — a move that could have easily resulted in a blocked or out-of-focus shot had the horse not one by an unfathomable 31 lengths. What Leifer came up with was a close-up of jockey Ron Turcotte atop the thoroughbred thundering down the homestretch. “What’s the point of being like everyone else?” Leifer explained.

That kind of by-your-bootstraps spontaneity is less common with up-and-coming photographers, who are less reliant on hand-eye coordination due to better equipment and more university level photography programs — luxuries their predecessors didn’t have.

“Across the board, there are more good young photographers out there. It’s a glamour sport,” Leifer said. “I can count on one hand the number of universities with photography programs that were available when I was starting out.”

These days, Leifer’s grandchildren are his favorite subjects save for the occasional shots of Ali. For the most part, he’s now behind a different type of lens tackling short films. Youngsters taking dancing lessons in tony Bronxville, N.Y., was the subject of one, and “Steamed Dumplings” is his title of his latest project. His buddies Peter Bonventre and sportswriter and commentator Frank Deford offered their take on the script and a few wisecracks. But like any good lensman, Leifer is most interested in the reaction of strangers.

“What do you think?” he asked after his latest screening.