NEW YORK — There are some styles from the late Seventies and early Eighties that women are loath to see come back, like fringe vests and shoulder pads.

The return of Carlos Falchi, however, was much heralded when the Brazilian designer... 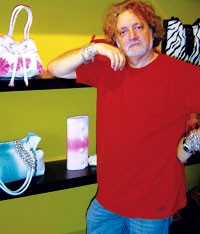 Young Faces of Pride: What the Month Means and What It Shouldn’t

NEW YORK — There are some styles from the late Seventies and early Eighties that women are loath to see come back, like fringe vests and shoulder pads.

The return of Carlos Falchi, however, was much heralded when the Brazilian designer relaunched his handbag brand three years ago, and now he’s being honored with the Accessories Council’s Lifetime Achievement Award.

As a budget-minded artist living in Greenwich Village here during the late Sixties, Falchi made his own clothes from patchwork leather that he bleached and dyed in his bathtub. Musicians like Tina Turner and Miles Davis soon became Falchi’s customers, and he eventually was bringing his clothing to meetings with buyers at Henri Bendel. But when he arrived at the Fifth Avenue shopping mecca, it was the bag in which Falchi carried his pants and vests, more than the clothes themselves, that the Bendel buyer wanted.

It wasn’t long before Falchi, now in his mid-50s, perfected his imperfect-looking slouchy messenger bags and oversized clutches in exotic and rich-colored skins. The bags’ details were the result of a collective effort, he said.

“When I would go to the stores, the ladies taught me how to make everything, because they would ask for things,’’ Falchi said. “My first bag didn’t have a closure; the straps, they were wrong.”

At one point during the late Eighties, Falchi’s business was so successful that he employed 300 people in New York. It turned out to be too much of a good thing: The company had to shut down in the late Nineties. “The business grew too much, and it ran away from me,” Falchi said.

Although he studied accounting, Falchi thinks his skill is best applied to the creative end of the business. “Everything you can do to kill a business, we did it,’’ he said. “And still we survived. I think the strength of the design kept it happening.”

Falchi continued to design during the few years his business was closed, and he also had two young daughters to put through college, so he decided to resuscitate the brand after filing for bankruptcy in 1997.

Now an intimate group of 22 bustle around the Manhattan workshop and piece bags together by hand. His designs look as they did back then, with their carefree Seventies aesthetic, yet they’re also very tuned in to today’s accessories market.

“We were pioneering then, but today it fits,” Falchi said, adding that his bags always worked for women whose lives require that their wardrobes travel seamlessly from the office to cocktails.

But Falchi’s work is still not done. He would like to keep his focus small and on the quality and craftsmanship of his bags. That doesn’t mean that he’s wholly opposed to expanding his business, as long as it’s done right this time.

“I would love to be associated with a large entity,’’ he said. “I feel we have so much here. It would be terrific to take one part of that and be able not to commercialize it but to deliver on time. That, I think, is my biggest wish. But in the meantime I’m not going to sit around and wait.”