Designers and rtw firms showed their lighter side at the Los Angeles market, turning to jewel tones and sun-bleached hues. 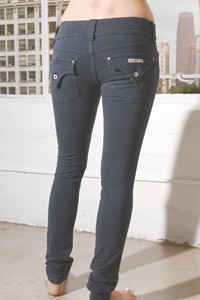 LOS ANGELES — Designers and contemporary labels showed their lighter side during the market here, from Thursday to Monday, taking a step back from early fall’s dark palette to showcase looks in jewel tones and light, sun-bleached hues.

At the D&A Annex show at the New Mart, Aude’s soft T-shirts in light, faded colors such as lavender struck a chord with buyers from Ron Herman, Fred Segal and Planet Blue in Malibu — all of whom wrote orders with the Los Angeles brand, priced at $25 to $40.

Planet Blue also ordered from Under, which offers jersey tops in such punchy colors as salmon and purple, wholesale from $12 to $20.

At Brighte at the California Market Center, which has become more focused on jewelry and accessories, chic misses’ line Iodice showed fuchsia and bright purple kimono-top dresses with flutter sleeves, priced at $115.

Denim, which remained a top seller, dabbled in bold colors. In its new showroom in the New Mart, Hudson Jeans featured a bright red skinny jean, and Blue Cult had a turquoise skinny style. Skinny-leg was the most popular style at Karmel & Alden, Pierce Jeans, Rock & Republic and James Jeans.

Hudson Jeans countered the trend by offering a high-waisted, wide-leg trouser in two dark washes. High-waisted skinny styles were shown at James Jeans — which positioned the pockets lower on the bum to avoid the dreaded “mom jean effect,” said sales representative Taylor Thomas — and also at Odyn, which wrote orders with H. Lorenzo and Fred Segal.

Though the late fall-holiday market lures fewer buyers than spring and fall market here, some companies seized on the event to launch new lines.

Among them was Kitson Denim, spearheaded by Fraser Ross, founder of the popular celebrity boutique Kitson on Robertson Boulevard. The collection of dark-wash jeans in skinny, straight-leg and boot-cut styles bears embroidered Ks on the back pockets. A mini denim skirt has the name Kitson in big, multicolored embroidered letters across the back pockets.

This story first appeared in the June 14, 2006 issue of WWD. Subscribe Today.

The denim was augmented by a small collection of cotton T-shirts, zip-up hoodies and sneakers — most with the brand name emblazoned on them. Denim ranged from $74 to $79, and tops from $18 to $26.

Karmel & Alden was new in denim, introducing nine styles with back pockets and waistbands lined with vintage patchwork fabric.

Corrine Grassini, the Los Angeles designer behind the avant-garde label Society for Rationale Dress, showed seven styles of loose-fitting T-shirts including racer-back tanks and raglan-sleeve tops, each adorned with removable metal chains, under the brand Guild.

Most apparel companies agreed they were pleased with the buyer turnout for a late fall-holiday market.

“We’ve had around 2,000 stores come through the show,” said Ed Mandelbaum, co-producer of D&A Annex. “That’s a 20 percent increase in attendance from the same show last year.”

Todd Hanshaw, a women’s wear buyer for the Wynn hotel in Las Vegas, said he attends markets here to shop for the hotel’s resort stores.

“Dresses are a big category for us,” Hanshaw said as he sat down to write an order for white button-down tops with misses’ brand Difference, adding, “These shirts sell really well.”

Carol Rose, owner of La Bella Rose, a specialty store in Mesa, Ariz., wrote orders for bejeweled and embellished tank tops. She comes to the minor markets here to find “small lines that have unique items for smaller boutiques,” she said.