The rapper has ended his relationship with Macy’s, which previously carried Trukfit, and is targeting retailers including Urban Outfitters and PacSun with an elevated assortment. 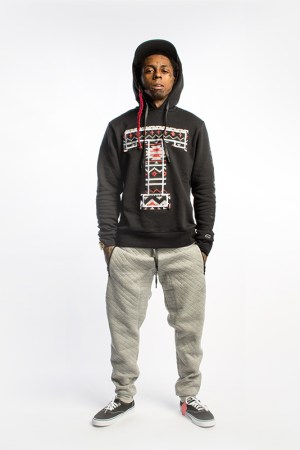 The rapper has brought on a new creative director, Kevin Leong, who’s held stints at Phat Farm and Baby Phat, and bought back the Trukfit license from Bravado, a company that’s known for producing tour merchandise.

The brand has also ended its relationship with Macy’s, which picked up the line shortly after it launched in 2012.

“I don’t know if Macy’s was the right place for it anyway. We oversaturated the market,” said Michael Morris, Trukfit’s marketing director, who added that the brand, which is sold in Dillard’s and Dr. Jay’s, is targeting mid-tier stores including Urban Outfitters, PacSun and Wish boutique in Atlanta.

When Trukfit, which stands for “The Reason You Kill For It,” initially launched, the designs were almost a parody of streetwear. They were bright, youthful and very reminiscent of Japanese streetwear brand A Bathing Ape. Leong hasn’t completely let go of the brand’s design ethos, but he has refined it.

“The consumer is not just buying Stussy anymore. He is aware of Raf Simons sneakers and Margiela. We had to age up the clothes,” he said.

The re-branded assortment consists of items that are trending within streetwear — bomber jackets, jogger pants and graphic T-shirts — and subtle details that elevate the pieces. Quilted sweatpants feature a slight drop crotch while a camo bomber is reversible and glows in the dark. The Trukfit logo is also less prominent and comes in multiple iterations.

“We’ve been playing with the logo and with different fonts and layouts and not just plastering Trukfit on everything. We want people to appreciate the design,” Leong said.

According to Leong, the line used to be piece driven, but now the deliveries — which include an Aztec story or a race car group — are tighter and more cohesive. The brand is also implementing core basics into each line that tie back to the delivery.

In January, the brand will release an aspirational line. The seven-piece collection includes a matte nylon elongated bomber jacket, a Neoprene fleece thermal hoodie and a wool snapback hat. It will retail from $32.99 to $139.99.

Trukfit attempted to enter the women’s juniors market in 2013, but has since abandoned the category to focus on the men’s line. They also have a kid’s license that’s doing well, according to Morris.

Leong told WWD that going forward the men’s line will expand to include wovens, bags, socks and potentially underwear.