A prolific artist, the Brooklyn-born Bassman worked tirelessly throughout her nine decades.

By Rosemary Feitelberg and Lorna Koski on February 13, 2012
View Slideshow 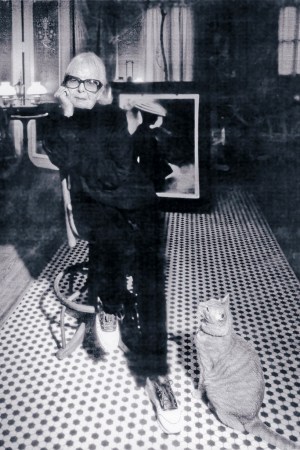 F. Scott Fitzgerald’s belief that there are no second acts in American lives simply did not apply to photographer Lillian Bassman.

Bassman, who died Monday at the age of 94, initially distinguished herself for artistically minded fashion and advertising photography and later in life transformed her career to that of a fine artist. Along the way, she influenced scores of other photographers and artists. Mary Ellen Mark said Tuesday, “Her absolute singularity set her apart. She was like no other. You just had to look at her images and you knew it was hers. That’s what great photographers like Helmut Newton, [Richard] Avedon, Irving Penn and her do. They don’t look like anyone else.”

Having recently seen photos Bassman took of women on the streets of Paris when she was in her 20s, Mark said these nonfashion shots hinted at her “fantastic vision and eye. She had such a range. Her fashion work was beautiful, too.”

Far-reaching as her portfolio was, Bassman’s work should continue to influence all sorts of artists, according to Mark. “When you look at the great photographers, their work carries on. It has to influence everybody, young photographers, graphic designers, artist, painters — it influences all of us.”

Bassman was always her own biggest critic, and she saw herself in every image she took, according to designer Joanna Mastroianni. “What was amazing about her was how passionate she was about her work right to the end,” she said, noting that her most recent project was a body of work on male bodybuilders.

A prolific artist, the Brooklyn-born Bassman worked tirelessly throughout her nine decades. Ever the visionary, she was always very much about what her next assignment would be. Her white hair, soft-spoken voice and frail frame belied her determination to keep tackling the new. “This is a woman who every day of her life looked forward to creating, but at the same time she gave herself permission to walk away from it for a while in the mid-Seventies. And when she decided to return, she was even more excited about it,” said Mastroianni.

Photographer Christopher Makos said, “Lillian was the Georgia O’Keefe of the photography world — she was the one to copy.”

Raised in Brooklyn, N.Y., where she’d known her future husband, Paul Himmel, since the age of six, Bassman worked as a model for Joseph Stella, Raphael and Moses Soyer, Arshile Gorky and others during the Thirties. In 1940, she showed fashion drawings she’d done during night classes at Pratt to Harper’s Bazaar’s legendary art director Alexey Brodovitch. Impressed, he lined up a graphic design scholarship for her at the New School, where he taught. At the end of the school year, he awarded his top student with an unpaid apprenticeship and, eventually, a job as his first paid assistant.

As art director at Junior Bazaar four years later, she hired young lensmen such as Louis Faurer, Arnold Newman, Robert Frank and, most famously, Avedon in 1945. Instead of staid studio shots, as was the norm then, Avedon “had a whole fresh vision that showed great movement and an understanding of youth,” Bassman said in 2005. “He was alive and spontaneous.”

Their friendship endured for decades. Before they had their respective children, Bassman said she saw Avedon daily. For six summers, she and Himmel shared a house with Avedon and his first wife, Doe, on Fire Island, off of Long Island, N.Y., where the couples “lived by candlelight and kerosene.” Bassman and Himmel introduced the Avedons to their habit of running through the dunes naked and skinny-dipping. “In those days, there were high dunes on Fire Island,” she said. “They were a little reluctant at the beginning, but it didn’t take more than two weeks for them to capitulate and join us. We were early bohemians. We introduced them to that kind of life, and they took to it very naturally.”

In 1945, the couples vacationed in Europe, starting out in Paris and hiring “a little car” and a driver to whisk them off to Rome and Venice. Back in the States they often went to Broadway shows, talked about books and lingered over dinner parties at the Avedons’ little ground-floor apartment.

Even after her student days, Bassman was a quick study. Just two months after trying her hand at photography, she was working on a regular basis with Carmen Snow and Bazaar’s then-fashion editor Diana Vreeland. In 1949, Bassman photographed her first Paris collections for the magazine, and two years later she and Himmel opened a studio using dancers such as Patricia McBride and Tanaquil LeClerq as fashion models.

Bassman was accustomed to working with savvy models like Barbara Mullen, Mary Jane Russell and Marilyn Ambrose — women, she noted wryly, who had husbands, children and lives beyond the photo studio. “First of all, I find the models of today to be sort of a bore,” she said in 2005. “To me, girls at 15 look like baby dolls. They are playing at wearing expensive clothing. You don’t find the soul in the face; you find the facade. You can’t get the essence of the woman herself, which I used to feel I did.”

By the Seventies, Bassman was working exclusively on her own projects. When her husband decided to go back to school in 1971, they made a baffling decision: They discarded many of their old negatives. “We both decided nothing is more boring than old negatives,” she said later. (When, in 1992, a friend discovered bags of damaged and torn negatives thought to have been among those discarded, Bassman made prints from them.)

In 1984, Bassman began a four-year break from being behind the lens to design a signature collection of sportswear, an experience that proved to be unrewarding despite critical success. “I didn’t last very long,” she said. “I found the dynamics and business end of it very frustrating. I was very happy to get back to photography.”

Sometimes her artistic perspective was not well received. In 2005, Bassman told WWD how she had butted heads with Bazaar’s Snow on an assignment in 1949. “She told me, ‘You are not here to make art! You are here to show buttons and bows,’” Bassman recalled.

It wasn’t the first time her artistry clashed with fashion’s commercial dictates. Nor would it be the last. Her ethereal images, often intentionally overexposed or otherwise manipulated, established her as a photographer to be reckoned with and one that Ruven Afanador continues to be influenced by every time he steps behind the camera.

“A huge fan,” he collects her work and singled out a shot of the model Lisa Fonssagrives, who was married to Penn, driving a convertible as being a personal favorite. Aside from always capturing life in motion, Bassman’s exceptional darkrooms skills were really her signature, he said. “She sort of transformed the images. It was incredible the manipulation she did in the darkroom,” Afanador said. “She gave everything a romance. Her images have such sensuality. She could take the same models that were so iconic that other photographers were using and she would use them in a way that was more about the image than a photograph of that particular model.”

When working, Afanador said he often evokes in his mind the shapes Bassman would use, how she loved the torso and the neck of a woman. “I am definitely influenced by her,” he said.

Her dealer, Staley-Wise Gallery, was one of the first to treat fashion photography as an art form. “When we were going to open our gallery [in 1981], we said we’re going to show fashion, and people considered it a big joke because that was not considered worthy of being in a gallery,” said director Etheleen Staley in 2008. “But people started to revise their thinking. And, as people began to like fashion, certain people emerged as being very good at it, taking it to the level of art. Lillian’s one of them.”

Nearing the age of 90, Bassman had maxed out on fashion photography. “I am sort of tired of all that,” she told WWD in 2005. “I had a terrible experience photographing for German Vogue just last year. I had chosen a model in her late 20s who looked like a woman — a quite beautiful woman. On the day of the shoot at 6 a.m., she had gotten a job offer to go to Paris for a lot of money. So when I arrived at 8 a.m., there was a girl with a beautiful body and the face of a 12-year-old. I was just destroyed. To me, a beautiful dress that costs $3,000 does not belong on a girl who looks 14 or 15.”

During that 2005 visit to her Upper East Side carriage house, the only way to see Bassman’s work was to ask. Only then did she reluctantly draw back a billowy white curtainlike divider to retrieve one of many striking prints neatly filed away. But instead of presenting one of her signature black-and-white fashion photographs, she offered a flower she shot 30 years ago and has since retouched and colorized. “I guess what keeps me close to photography is the incentive of going on, finding new dimensions, changing things I’ve done and seeing it in a different way,” she said.

Reflecting back on her multiframe career, Bassman told WWD, “I regret losing a lot of the Harper’s Bazaar stuff, but the commercial stuff I was very glad to get rid of. I’ve had a very long career, and I did different things at different times. I don’t think I would have changed what I did.”