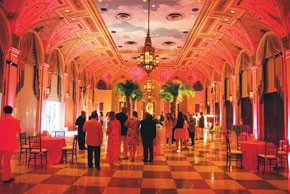 PALM BEACH, Fla. — Lilly Pulitzer is out to throw its heritage around in the contemporary market.

As brands such as Tory Burch, Milly, Tibi and Trina Turk leapfrog Pulitzer in terms of growth, the company’s owners are planning an aggressive expansion to stay in the game. “There are brands out there that are just eating our lunch,” admitted co-owner and president James Bradbeer Jr. “But we are ready to compete with them head-on.”

And last weekend, he outlined how. Pulitzer kicked off its 50th anniversary celebrations at The Breakers hotel here, during which it unveiled a string of initiatives to prepare for the years ahead. Buyers from Bloomingdale’s, Saks Fifth Avenue and owners of the 75 Lilly Pulitzer signature stores flew in last Thursday to hear about the plans.

The firm would not comment on volume, but according to industry sources, it does more than $75 million in annual wholesale volume. Bradbeer said he hopes the steps will help the brand grow by at least 20 percent next year.

Over the next 12 months, if consumers are in the market for a new Jeep, think of taking some piano lessons, enjoy playing board games and really like orange juice, then Pulitzer could be their brand of choice. All of these products will be part of the celebrations of the anniversary of when a 28-year-old Pulitzer decided to open a juice stand here, which led to her designing a classic printed cotton shift dress that camouflaged the stains on her clothes. The shift became a business Pulitzer would grow until 1984, when she retired. In 1993, Bradbeer and his business partner, Scott Beaumont, acquired the brand.

“We have invested more time and more money than we ever have before in order to evolve and innovate while dealing with the changes happening in the market,” said Bradbeer. “This is all about honoring our past, but rebuilding and focusing on taking the brand forward.”

As part of the celebration, or Jubilee as the company calls it, the brand has partnered with other “great American companies,” including Jeep Wrangler, which in November will launch a floral-print, limited edition Lilly Pulitzer model. About 70 of the Jeeps have already been preordered and, at $25,000 a pop, some of the Signature store owners will not only be driving one, but they will also be able to sell them to their customers. The Jeep will be accompanied by a pink-and-green printed Steinway & Sons piano, a Hasbro Monopoly “Lilly-opoly” game (where a player can buy property in Palm Beach before “shifting” on to the next space) and a Florida’s Natural orange juice carton decked in Pulitzer’s famous prints. The juice will be sold in grocery stores nationwide, and one million of the limited edition cartons will be distributed.

But that’s only a small piece of what the company has developed. Starting with the resort collection, which is traditionally the brand’s strongest season, the product has been completely revamped. To help with this, Bradbeer has brought in several seasoned designers to consult with the Lilly team. Gordon Thompson, former corporate vice president of design and global creative director at Nike Inc. and former executive vice president and creative director at Cole Haan, has joined Pulitzer as a creative consultant, and Jeffrey Chow has signed on as a women’s wear design consultant. Besides designing his own ready-to-wear line, Chow was previously designer at Pucci and Perry Ellis.

The result is a collection segmented into three categories — Jubilee, Day Lilly and resort collections. Jubilee consists of high-end product for women, men and children, such as beaded and embroidered silk gowns and dresses, cashmere sweaters and tunics. The collection, wholesaling between $24 and $425, will be offered in limited edition runs, and while there are some signature Lilly Pulitzer prints throughout, the Jubilee line will influence the less-expensive and more everyday Day Lilly products.

Day Lilly represents the most change for the brand. There are many prints seen throughout, but overall, they are not as busy as the traditional Lilly designs — there’s a tan and brown giraffe-print safari dress, an elephant-print top, a blue and coral medallion-print silk dress and cotton tops in solid navy, white and pink. This collection, Bradbeer noted, was made to become the “modern Lilly collection.”

The resort line, which will be sold year-round, consists of traditional Lilly prints — mostly done in pink and green, but there are several blue-and-yellow printed pieces as well. The resort line — which focuses on the more iconic Pulitzer prints — includes sportswear, swimwear and dresses.

In addition, the brand will set off a nationwide traveling retrospective that will showcase pieces from the Lilly Pulitzer archives, as well as educate Lilly-loving communities on the brand’s influence. And, in stores, between resort 2008 and summer 2009, consumers will be given a Jubilee “passport” and receive stamps for all purchases throughout the Jubilee season. Consumers collecting the most stamps will be eligible to win limited edition Lilly Pulitzer prizes. Also, to create a “Wonka-like frenzy,” the company is placing 50 golden Jubilee tickets on merchandise. The tickets will lead to further prizes and the number of unsold tickets remaining will be tracked on the Lilly Pulitzer Web site.

To help create a new identity for the modern Lilly Pulitzer brand, the firm has hired Gyro Worldwide, a Philadelphia-based advertising agency, to create a video and brand book displaying the new “A Colorful Life” slogan. The book, Bradbeer said, honors the brand’s past while looking forward to the future.

Bradbeer said over the past two years, he has invested in consumer research to find out who the Lilly customer of today is and who the firm wants to target. After hiring Dee Warmath as a consumer research consultant, the firm found its customers not only have a strong emotional connection to the brand, but also overall spending ability of $45 billion.

“One of the most shocking things that we learned is that 80 percent of our customers have jobs, they work for their money,” Bradbeer said. “We weren’t addressing that. This is a big deal that we weren’t meeting their needs for dressier items to wear to work.”

In addition, the new year will bring more products — a fragrance launch and stationery, to name a couple. This will add to the brand’s existing mix of jewelry, handbags, shoes, eyewear, sleepwear and home items.

Bradbeer and Beaumont purchased the Lilly Pulitzer brand from Pulitzer in 1993, after it had been out of business for nine years. Their mission was to bring the designer’s whimsical printed dresses and sportswear collections back to what was a dedicated customer base. Today the brand, which is based in King of Prussia, Pa., sells in major department and specialty stores including Bloomingdale’s, Lord & Taylor, Bergdorf Goodman, Nordstrom, Neiman Marcus and Saks Fifth Avenue. In February, the firm made major strides by jumping the pond and selling to Harrods in London — its first international account. The company opened its first store in Manhattan last month at 1020 Madison Avenue, adding to its other company-owned stores in locations including Greenwich, Conn.; Key West, Fla.; White Plains, N.Y.; King of Prussia; Dallas, San Diego, and Austin and Houston, Tex.

No longer an owner of the company, at 77 years old, Pulitzer works as a consultant for the brand, or as Bradbeer calls her, “our cheerleader.” Pulitzer still resides in Palm Beach, in the house she built 25 years ago. She has a customized L-shaped pool in her backyard along with a trampoline and a playhouse for her grandchildren. The design team at the company often visits Pulitzer in order to gain inspiration from her surroundings, whether it’s from a pattern on a pillow in her living room, or a small stone frog statue hidden among the lush greenery in her yard (which can be seen embroidered on a navy polo in the resort collection).

Pulitzer was recently released from the hospital after an illness that led to surgery to remove her gallbladder. Bradbeer said he doubted she would have the energy to come to the celebratory dinner at The Breakers on Friday, but to everyone’s surprise, she appeared. Guests at the dinner stood up and gave her a long standing ovation. She gracefully smiled and waved before taking her seat.

“She hates to be cooped up at home,” Bradbeer said. “She called me last minute and said, ‘Screw it, I’m coming.’ I should have known she wouldn’t miss it.”