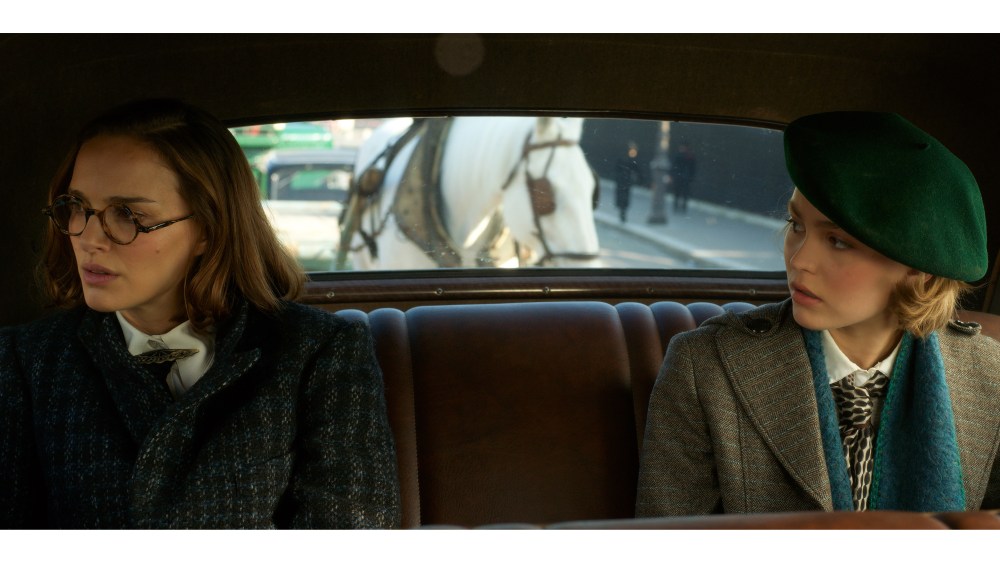 Anaïs Romand is on a roll as a costume designer, best known for the films “Saint Laurent” (for which she scooped the French César Award for best costume design in 2015) and also recently “Diary of a Chambermaid,” featuring Léa Seydoux. Now she’s bringing her deft hand to “Planetarium,” the most anticipated French film of the fall starring Lily-Rose Depp and Natalie Portman. Directed by Rebecca Zlotowski and also starring Amira Casar and Louis Garrel, the period film is slated to debut at the Toronto International Film Festival in September, ahead of a Nov. 16 release in France. (A special screening is also set at the Venice Film Festival.)

It follows the journey of two American sisters in Europe in the Thirties. Romand delved into piles of documentation on the decade. The designer created all costumes with a team of a dozen seamstresses in an atelier in Paris. Romand talked to WWD about the behind-the-scenes work, including the challenge of working around two actresses with busy schedules, which didn’t allow for many fittings.

WWD: The film is set in the Thirties. What does it involve?
Anaïs Romand: The Thirties were years of opulence for some, poverty for others, also with artistic emulation, but they also marked the rise of fascism and antisemitism. There’s all these elements as the backdrop. The character played by Natalie Portman, Laura, is traveling across Europe with her younger sister, Kate, played Lily-Rose Depp. When they arrive in Paris, they’re two poor American girls. However, there’s this one scene of a party hosted by a producer played by Emmanuel Salinger, featuring dresses resembling couture of the time — Schiaparelli, Lanvin, Vionnet, Madame Grès. Most of the original couture dresses are in museums, but I managed to rent very beautiful dresses for extras. Natalie Portman has many very beautiful outfits that are all custom made for her. She is very petite. So is Lily-Rose: She’s extremely thin, like a small reed. Tailor-made costumes are very important for main characters as the screen magnifies and you don’t know in advance which detail of the garment will appear. So we created almost everything but bought a few authentic dresses and accessories.

WWD: Where do you go for one-off finds?
AR: I often go fishing for costumes at the Saint-Ouen and Vanves flea markets and at public auctions. You have to deem if the fabrics are solid enough to survive filming. Fabrics are roughed-up on a film set.

WWD: How was your experience of dressing Lily-Rose Depp?
AR: Lily-Rose was discovering the wearing of costumes that were tailor-made for her for fiction; she was very happy and attentive. She was disciplined, professional, patient and adorable. Both actresses were pure pleasure to work with. In the film, her sister makes her look younger so that she touches the cabaret audience during the performances. So we went to the childish side for Lily-Rose.

WWD: What were Natalie Portman’s looks?
AR: In the film, Natalie Portman meets a producer played by Emmanuel Salinger, and starts a career as an actress. So there are many different looks — slightly vamp or sophisticated party looks. I dressed her in high-waist, pajama-inspired pants and a lot of shorts. They were very much in fashion on the French Riviera. I also created a silhouette made of pants and a jacket in hemp.

WWD: What about the men’s looks in the film?
AR: I created double-breasted jackets with luxurious fabrics; high-waist pants, which actors found extremely comfortable; tuxedos, and bow-ties for the parties scene. I watched many films with French actor Jules Berry for inspiration. Fashion was very flattering for men: It gave them a slim figure and long legs, with these high-waist floating pants. And it was very beautiful on thin women with small breasts. Waist was emphasized both for men and women.

WWD: What do hairstyles and makeup look like?
AR: They both have a bobbed hairstyle, but Lily-Rose with wavy hair. For makeup, Saraï Fiszel created a lot of looks with red lips. Natalie Portman has perfectly outlined lips.