An empire changes direction. In the fashion business, there can be no sacred cows. No one knows that better than Leslie H. Wexner, chairman and chief executive of Limited Brands Inc. 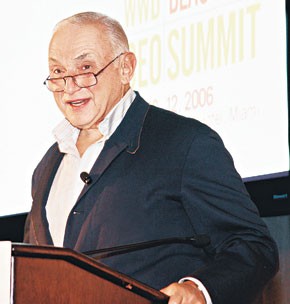 In the fashion business, there can be no sacred cows.

No one knows that better than Leslie H. Wexner, chairman and chief executive of Limited Brands Inc.

For Wexner, it was emotionally tough to sell off his Limited Stores and Express apparel chains — two businesses that he founded and nurtured into national specialty powerhouses and that helped make him a multibillionaire.

View the full coverage of  WWD Year in Fashion 2007 at www.wwd.com/yearfashion07 For years, Wexner refused to acknowledge he would consider shedding Limited and Express, even as they lost market share and relevance with consumers and investor pressure mounted. Attempts to turn around and reincarnate Express and Limited Stores never really took. Ultimately, the businesses became such a drag on the corporation and distracted from pumping up and realizing the value of the bigger and more vibrant Victoria’s Secret and Bath & Body Works divisions that Wexner bit the bullet and gave up his babies.

In front of analysts, Wexner expressed relief, not remorse, and spoke of the strategic benefits of being apparel-free to focus on the lingerie, beauty and personal care units, though Victoria’s Secret still has a substantial stake in sportswear, jeans and accessories.

“Happily,” he told the analysts in October at a conference in Columbus, Ohio, where Limited Brands is based, “we are not in apparel specialty retailing. That was a concern for many of you and us for many years. I am delighted we don’t have apparel retailing stores and that we are as dominant and significant in the categories we are in. Brand loyalty to beauty and lingerie is very different than loyalty to apparel. Because of that loyalty, we get trial and repeat [business] in a way that apparel does not get. It’s a very different pattern of purchasing behavior.

“Both categories have significantly longer product life cycles and reduced markdowns, giving the business unusual characteristics and stability….For substantial reasons, I am more confident than I’ve ever felt — tactically and strategically.”

In a footnote to the Express deal, Michael Weiss — the guardian of Express for more than two decades — who in spring 2004 left the chain abruptly, returned to the chain for yet another attempt to revive the business, but this time with a new owner/partner. Weiss had been a close partner of Wexner’s since he joined Express in 1981 and took it from just eight stores to about 1,000. Weiss is out to prove he can put Express back on track again.

There are some notable exceptions, including J. Crew Group, Saks Fifth Avenue and Neiman Marcus, where business keeps rolling along and newness and exclusivity still sell, although Neiman’s admitted last week that it hit a bump in the third quarter after overordering on fall designer merchandise.

In addition, Wexner is looking to the Internet for volume growth, and to QVC, too, where some products have been successfully tested.

“This is really a new company,” Wexner stated after the sell-off of Express and Limited Stores, “very well positioned and very differentiated from other specialty retailers.”

Retailing is turbulent by nature, but 2007 delivered some real drama. Amid seesawing sales trends and disturbing macroeconomic news, change at many high-profile chains was ubiquitous, whether out of necessity, as in the case of Gap Inc., or just because it’s good business practice, as with J. Crew Group.

Gap’s gone back to its iconic offerings, simplified its assortments and decentralized so merchant leaders have more control. The company also ousted Paul Pressler and named a new chief executive, Glenn Murphy, who’s done turnarounds in Canada, though none in apparel. He’s faced with the monumental task of reversing seasons of market share losses and reining in overgrown divisions in a very competitive environment.

J. Crew, on the other hand, has been soaring, and much of its good fortune stems from trading up, launching new categories and brands, distinctive colors and details, steady store openings and a hands-on ceo in Millard “Mickey” Drexler, who inspires creativity and quality.

Lord & Taylor has a new owner funding a makeover on many fronts, like elevated marketing; extensive remerchandising focused on better, bridge and contemporary labels; exclusive links with designers, and store improvements. At Saks Fifth Avenue, comp-store gains have recently outpaced the competition. The Fifth Avenue flagship’s new shoe floor, dubbed 10022-Shoe, was one of the marketing hits of the year and ceo Steve Sadove has all stores tailoring assortments to meet local demands and draw a wider audience.

Upscaling also ruled the day. Bloomingdale’s, always among the most contemporary, nonetheless enhanced designer offerings at certain locations, including 59th Street in Manhattan; Chestnut Hill, Mass., and San Francisco. Nordstrom, too, bolstered the designer side of its business and believes the category is right for a quarter of its locations.

On the more moderate side, Talbots shook up its ranks, putting in a new ceo, Trudy Sullivan, as well as a new chief operating officer, Philip H. Kowalczyk, and continues to search for a chief merchant. The chain also hired a branding agency to reexamine the image and possibly develop a new plan.

Meanwhile, Ann Taylor continues to have its ups and downs, yet has growth initiatives on the drawing board, including a Boomers chain for fall 2008 and Loft Outlets next summer, in addition to having launched its Possibilities fragrance and Ann Taylor Body Care line for holiday selling.

All eyes were on Macy’s, where consumers, particularly in the Midwest, have resisted shopping former May doors converted to Macy’s. Exclusive merchandise, like the Martha Stewart home collection and Tommy Hilfiger sportswear, and coupons for price breaks, could be critical to making the merger work. As ceo Terry Lundgren said at the end of the third quarter: “We have a wide range of new and distinctive merchandise in our assortment for the holiday season at both Macy’s and Bloomingdale’s, and we believe we will compete successfully in the fourth quarter despite what continues to be a challenging economic environment.”
— D.M.