Linea Rossa on the Rise

Prada's Miuccia Prada and Patrizio Bertelli have long been known to cater to women looking to dress up for work. But now the two increasingly want to cater to a woman's down time as well with their line Prada Linea Rossa. 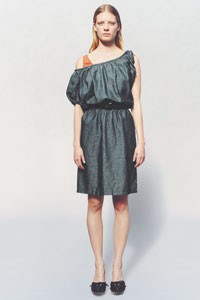 MILAN — Prada’s Miuccia Prada and Patrizio Bertelli have long been known to cater to women looking to dress up for work. But now the two increasingly want to cater to a woman’s down time as well with their line Prada Linea Rossa.

The collection is the informal portion, denim and activewear included, of the main Prada ready-to-wear line. Since its launch in 1997, it has morphed significantly, to the point that it shares closet and store space with the artsy and experimental vision Miuccia Prada puts on the runway. In other words, one woman, two fashion needs.

While it has maintained its sporty edge and technical connotation, Linea Rossa has grown in terms of product range, fashion input, research and sales.

“The Prada brand characterized by Linea Rossa is simply our proposal for free time, be it activewear or contemporary urbanwear,” Prada Group chief executive officer Bertelli told WWD exclusively. “For us, it is very important to keep a design and image coherence between the two parts.”

In typical Miuccia Prada fashion, the designer blurs the formal-informal line in Linea Rossa by creating products made with contrasting elements, such as a patent leather sneaker, or a classic blazer in high-tech nylon. Average retail prices are $280 for denim, $350 for footwear and knitwear, $700 for outerwear and $2,300 for fur coats.

Linea Rossa should not be confused with Luna Rossa, a technical collection of high-performing apparel that was conceived for sailing purposes and is tied to the Luna Rossa boat and the America’s Cup. Luna Rossa’s base palette is red, blue and white.

Linea Rossa has dedicated rack space in all Prada stores worldwide with merchandise that never overlaps with the main line. The collection also is carried in about 500 other sales points worldwide, including Bergdorf Goodman; Saks Fifth Avenue; Zoe in Princeton, N.J., and Richards of Greenwich, Conn.

The fashion house is seeking to further grow its three main markets for Linea Rossa — Italy, the U.K. and the U.S.

“I have been carrying Linea Rossa for quite a while and it sells very well because it’s sporty, but never too street driven,” said Rosy Biffi, owner of the Biffi specialty store in Milan. “It’s very well made and very well positioned. It’s obvious that the same creative mind is behind it [and Prada] and it targets the same client.”

To underscore the commonality between Linea Rossa and the Prada main line, for the first time ever the spring ad images were shot by the same photographer using the same models: Steven Meisel with models Sasha Pivovarova and Eddie Klint in a New York studio.

“The campaign wants to spotlight the two different attitudes of the same person,” said Bertelli.

Linea Rossa’s spring collection focuses on Hamptons-style good taste mixed with urban technicality, epitomized by silk bomber jackets and shorts, trenchcoats splattered with an acid yellow and beige camouflage print and cropped jackets and miniskirts in yellow or black leather and suede. Also key are styles made from ripstop, a nylon-based fabric that hails from the ski world that Prada managed to make soft and lightweight and turn into parkas and tulip skirts. The fabric has a perennial sheen that gives it a futuristic edge.

Linea Rossa is a platform via which Miuccia Prada continues her relationship with young artists. For example, there are T-shirts called Unspoken Dialogue designed by street artists under a project that began in fall 2005 and runs through spring 2007. Rem Koolhaas also masterminded an installation for the collection’s eyewear.

In addition, the Linea Rossa line has done a lot to carve its own path in denim. For spring, there are linen and silk denim jeans that require dry cleaning to preserve their stiffness and dark blue dye. Fine details such as cloth-covered buttons, hidden closures, pleats and deerskin tags with gold metal logos do the rest.

“Linea Rossa underlines the fact that it’s the product that makes the tag and not vice versa,” said Bertelli.