INNERWEAR: Humor is taking over from pure sex appeal in the boudoir through the highly lucrative genre of licensed characters. 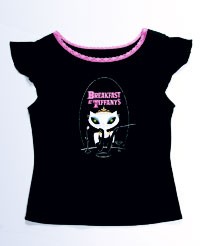 NEW YORK — Humor is taking over the boudoir.

The move toward levity rather than raw sex appeal is being shaped through an innocent enough genre — licensed characters. The demand for feel-good icons is creating a bit of a cult following in lingerie, whether it’s Mickey, Barbie, Supergirl, a nostalgic TV series such as “I Love Lucy” or new, stylized characters such as French Kitty and mascot dog Spot Says.

A sophisticated sense of satire also is entering the global marketplace, mainstream lingerie advertising campaigns and point-of-sale materials such as Wonderbra’s headline for its new worldwide ad blitz, “Yes, They’re Real. Thank You.” There’s also a crop of amusing new labels surfacing such as Save the Queen, Myla Sex Life Accessories and Croque Moi (Bite Me, in French) at major European stores such as Galeries Lafayette.

The demand for humorous merchandise has been growing over the past year at department stores, when sportswear areas began featuring T-shirts with updated icons that have a retro flavor, such as Betty Boop, alongside sportswear separates. The idea filtered down to young, contemporary underwear, daywear and sleepwear, which did their own rendition with contemporary dual-purpose items from names such as Paul Frank and David & Goliath.

Now the appetite for characters that have an updated, sophisticated spin in intimate apparel and sleepwear has gone mainstream to specialty chains such as Delia’s and Hot Topic, as well as mass merchants Wal-Mart, Kmart and Target. The new audience is a fashion-hungry generation of 12- to 18-year-olds who want characters that have attitude, a hip identity and represent an expression of affirmation.

A key reason for the comedic twist is that reality does bite, say marketing and manufacturing executives. A growing number of consumers — young and old — are looking for products that offer a whimsical release from an environment afflicted by terrorism, the Iraq war and unemployment.

Brand-image guru Marc Gobé said character animation in motion pictures such as “Shrek” and “Shark Tale” have made a huge impact.

“This is an idea we need to look at,’’ he said. “It is interesting to see the success of character animation in motion pictures which are the biggest box-office movies. There’s a reason for that. Characters take us away from reality. And people need to laugh at themselves with all of the seriousness of their lives right now. They need to escape.”

Gobé, who is president, chief executive officer and chief creative officer of brand-image creative firm Desgrippes Gobé, said, “Victoria’s Secret became so powerful over the past 15 years because it really was about a woman’s freedom to express her sexuality. But women have passed that. There’s a completely new approach to lingerie by younger women and they don’t look at it as just underwear, but a way to express one’s self and one’s sense of humor.

“I think humor will be the main influence in years to come and that will be driven by younger generations of women to come,” Gobé said. “From a brand perspective, two emotions traditionally sell product — sex and humor. In lingerie, the main driver has been sex for a long time. Now it’s time for humor. As an example, the Betty Boop character has her own uncanny sense of humor that can change the perception of a product.”

Renee Frazer, a consumer psychologist and professor of research and marketing at the Annenberg School for Communication at the University of Southern California, said, “I think licensed characters represent a phenomenon that’s relevant today to 14- to 24-year-olds as well as the 45-year-old. They represent nostalgic good times and comfort in an era of turmoil, a simpler lifestyle and control for people on a deep level.”

Lovable characters may share common ground with young and old alike, but Frazer believes they also represent a bond during major life changes.

“There’s still a lot of trepidation since 9/11,” said Frazer, who is also ceo of Santa Monica, Calif.-based Frazer Communications. “I do a lot of therapy sessions with young people, especially urban kids who all know somebody serving in the Iraq war. The uncertainty of their lives is unsettling, and they worry about a potential draft. People need symbols that are relatively simple and give a certain sense of grounding. And characters such as [70-year-old] Betty Boop do that, even with those who don’t know her, because they can relate to a hip, kitch character.”

Ita Golzman, vice president of North America Licensing for King Features, described Betty Boop as “our billion-dollar baby,” noting that overall licensed character business has doubled from a year ago and the demand for anything nostalgic is “tremendous.”

“The whole licensing business has grown dramatically, as well as the number of licensed characters,” said Golzman. “We recently signed a deal for nostalgic pinup girls by Bernard of Hollywood with Berkshire Accessories for spring ’05, and Richard Leeds International will be doing Blondie & Dagwood sleepwear, which is one of the most popular comic strips in the world.’’

Golzman said that a character’s breadth and scope can extend beyond traditional soft goods, noting, “We just signed a deal for Betty Boop diners. The first will open in San Francisco in early spring, and plans are to open lots of diners across the U.S. Even the waitresses will dress and look like Betty Boop, and licensed products will be merchandised next to registers.”

Leslie Levenson, senior vice president of marketing for Mattel Brands Consumer Products, said characters may not be real, but they often become a part of the family.

“We think Barbie transcends a character brand,’’ she said. “She’s much more than that, she’s a fashion brand. As we want to insulate ourselves, our family and kids, you automatically turn to childhood memories that make you feel good. Barbie [who turned 45 years old this year] does appeal to women of all ages.”

Levenson said in addition to a Barbie Couture line and three free-standing Barbie stores added to the existing 18 in Japan by the end of 2004, Mattel has introduced a licensed line of Barbie sleepwear for major department stores and specialty boutiques this fall. The line is produced by Richard Leeds International.

Maribeth Towers-Toth, vice president of Apparel & Accessories for Warner Bros. Consumer Products, said a key factor in maintaining a character’s popularity and longevity is keeping up with fashion and cultural trends.

“The character’s personality and verbiage have always been important,’’ she said. “There’s a Looney Tunes character, Pussyfoot, who’s very sweet and cute. But the verbiage is now edgy, like ‘Kitty Got Claws.’ A few years ago, it was all about a very angelic, sweet Tweety. Tweety is a little sassier now. We see the shift is selling well for us.” She added there’s been “tremendous growth” in overall sales in the last 12 to 18 months.

Towers-Toth noted that a licensed line of underwear and daywear with SBH Intimates bearing the Supergirl character has been a big seller. “It started in specialty and midtier stores like Kohl’s, and trickled down to Target and Wal-Mart, where it is doing very nicely.” She said the Superman character, which is owned by the DC Comics unit of Time Warner, has “definitely been on a growth pattern” over the past several weeks.

From a sleepwear licensee’s perspective, Richard Leeds, ceo of Richard Leeds International, said, “The entire demographic of who’s shopping the stores for character sleepwear, leisurewear and underwear is the young, contemporary woman. They are buying loving characters, but the art is not overdone or overembellished. We are always updating the look and the image through color, prints and styling. And we are always assessing cultural and fashion trends.”

Leeds said, “Our business has grown 20 percent over a year ago with characters like Trendy Wendy and Jack the Nerd by David & Goliath.” He also said he’s doing well with imagery from “The Wizard of Oz.”

In addition to Disney’s Mickey and Looney Toons’ Tweety, Leeds said the top-selling characters in sleepwear are Betty Boop and the “doleful purple donkey,” Eeyore, one of the popular Pooh characters from the 100 Acre Wood children’s book. “It’s really the intimate contact the consumer has with the product that sells the product. It’s something intangible that brings back memories, makes you smile and want to wrap your arms around it. Eeyore is a character that is so loved at all tiers of distribution. But Betty Boop, she’s loved because she’s no Olive Oyl — she has attitude and looks like she has a real female form.”