Lingerie manufacturers will get their first chance to show off the best of spring at the Lingerie Americas trade show. 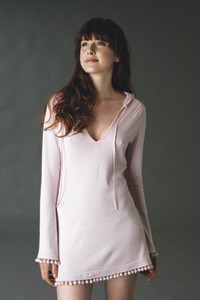 NEW YORK — Lingerie manufacturers will get their first chance to show off the best of spring at the Lingerie Americas trade show, set for July 30 to Aug. 1 at the Altman Building and Metropolitan Pavilion here.

The trade show will host three fashion shows for as many as 360 buyers per day, exhibiting foundations, daywear, sleepwear, at-homewear, loungewear and swimwear.

The show, with 270 exhibitors, also has added a venue for new brands on the entire fifth floor called The Level, which will showcase lines such as Delta Galil’s Nicole Miller Signature Foundations line, Shirley of Hollywood and Rampage.

Sylvain Heraud, project director for Lingerie Americas, expects a busy show, especially with the buzz around the full-figure bra segment.

“Companies that have not before are going up to E, F and G cups,” Heraud said. “The market is very big in the U.S.”

Top trends are expected to include coquettish bra and panty sets with ruffles and lace trim, lots of pastel and dainty floral prints.

Victor Lee, president of NAP Inc., said the show was “worthwhile in exhibiting some of the companies’ core collections, which include Crabtree & Evelyn, Anne Lewin, Princess Tam Tam and Derek Rose.”

Lee said that he writes specialty store business at the show, while department stores follow up in the showroom for more detailed orders for their stores. Although Lingerie Americas is the largest lingerie trade show in the U.S., Lee continues to focus on regional markets such as Los Angeles, Chicago, Dallas and Atlanta.

“We generally have a very strong show,” said Neil Mossberg, president of Fernando Sanchez, which is based here and sells to Neiman Marcus, Bloomingdale’s and upper-tier doors. “It’s a great opportunity to sit with specialty stores, as well as our larger stores with whom we preview the following season.”

Fernando Sanchez is sticking with lots of color, for which the company is known.

“We’re continuing with the tradition of what we do, a tradition of color,” Mossberg said. “The latest addition is the expansion of our prints, which have performed well in preliminary tests.”

The company is also set to launch a slightly lower-priced, younger line called FS2, which will also focus on color, with a sharper distribution.

Cool Blossom, a new company based in Stamford, Conn., is making its debut. The firm has come out with a patented fabric blend that includes bamboo to wick away sweat, while remaining soft.

“It is sleepwear for mostly menopausal women who experience night sweats,” said Cool Blossom chief executive officer Louis Van Leeuwen. “There are 26 million women in that category today, and although we found that there are a number of companies doing similar things, we are bringing a fresher style.”