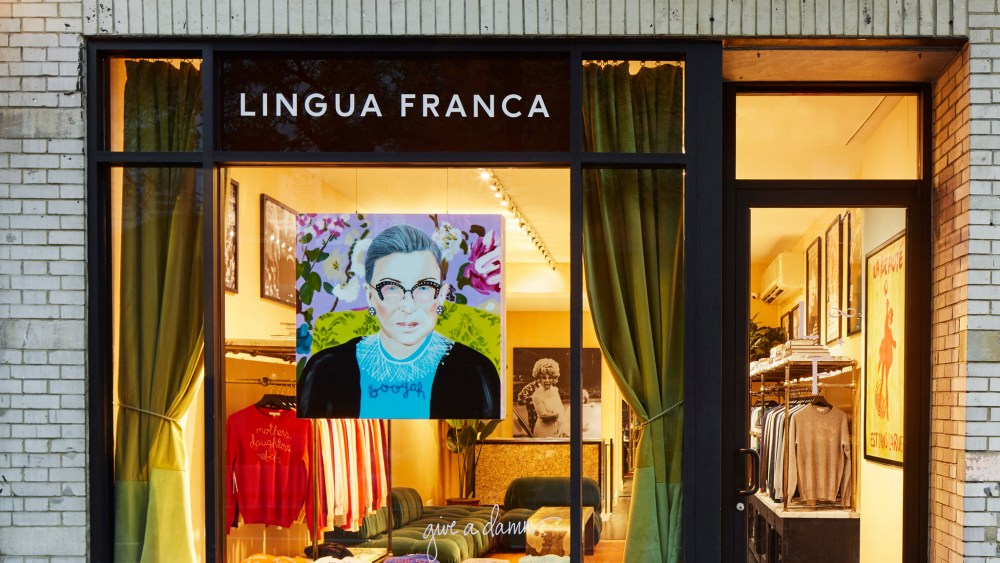 NEW YORK — Lingua Franca is among the new storefronts on Bleecker Street here.

Rachelle Hruska MacPherson, who founded the brand of cashmere sweaters embroidered with phrases in 2016, opened her first store at 382 Bleecker Street earlier this week. The space is one of the seven storefronts Brookfield Properties bought earlier this year with plans to revive the neighborhood, a once-booming retail destination that became a bit of a ghost town in recent years. Lingua Franca, along with Prabal Gurung, Slightly Alabama and Bonberi and Fleurotica, are the tenants involved in the Love, Bleecker project done with Skylight and Brookfield to bring art, music and cultural programming to the neighborhood along with retail.

Hruska lives in the neighborhood with her family. Her husband Sean MacPherson owns the Waverly Inn, located on Bank Street. “We’re super committed to the neighborhood, and I’ve always been interested in what happened on Bleecker,” said Hruska MacPherson. “When I moved to New York 15 years ago, that’s where I went to hang out and shop and pretend to be cool. It was sad to see it be dead and fall to all these crazy high rents.”

The 560-square-foot store was designed by Sean MacPherson and features custom artwork by New Orleans-based artist Ashley Longshore, including portraits of Ruth Bader Ginsberg, Maya Angelou, Michelle Obama and Dr. Christine Blasey Ford in Lingua Franca sweaters. The store will carry the brand’s men’s, women’s and children’s sweaters, which range from $160 to $400 for custom orders, as well as Of Rare Origin jewelry, a children’s collection with The Tot, Dempsey & Carroll Stationery and La Ligne custom-embroidered pajamas.

“Everyone’s trying to figure out what the next thing in retail is, and how you can make retail happen in a world of social media and online buying,” said Hruska MacPherson. “Everyone’s like, ‘You have to create an experience.’ I really felt like we had that naturally with our embroiderers.”

The embroiderers who usually work out of Lingua Franca’s office in the Jane Hotel will be in the store to do custom pieces or teach customers how to stitch. Additionally, Hruska MacPherson is hosting Sen. Kirsten Gillibrand to launch her children’s book “Bold & Brave,” and will have a capsule of sweaters done with quotes from the book. There’s also a collaboration with Focus Features for their upcoming film “On the Basis of Sex” based on Bader Ginsberg.

Hruska MacPherson launched the collection on Instagram in 2016 as a hobby and Net-a-porter picked up the collection as a capsule of five sayings available on three color sweaters. After the 2016 presidential election, Hruska MacPherson designed a sweater that said “I Miss Barack” and saw a leap in demand. “We didn’t have a web site, we didn’t have p.r., all of it was just kind of like a hobby that I wasn’t even seriously pursuing,” she said. “I think we did 30,000 sweaters so far this year. We’ve raised close to $300,000 for charities, and it’s just blown me away. I had no expectations.”

As for making the leap from a digital/social media-driven model to brick-and-mortar, Hruska MacPherson said, “We’re hoping to bring the brick-and-mortar back to our online users and community. So we’ll create content for Instagram based on the couch series with all the people that we’re bringing in, almost like a podcast meets Insta Stories.”

There are no plans for additional stores yet. She had been offered pop-ups before, but turned them down in favor of something more permanent. “I would love to see how this goes and I think we’ll learn as we go,” said Hruska MacPherson. “I want the store to be here for a while, but, on the other hand, I have no idea what I’m doing.”