Linking With a Big Boy: Vornado and Target Said In Talks Over Sears Bid

A deal is said to be in the works between Vornado Realty Trust and Target Corp. to compete against Kmart Holding's planned merger with Sears. 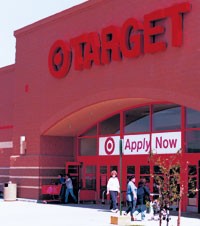 NEW YORK — Vornado Realty Trust might be lining up a behemoth of a partner in its potential bid for Sears — none other than Target Corp.

While sources from the real estate and financial communities said Vornado has held preliminary talks with everyone from Wal-Mart Stores to private equity group Cerberus about joining a bid for Sears, the favorite now is believed to be Target. The Minneapolis-based discount chain has made no secret of its eagerness to get its hands on more real estate as it attempts to keep up with the Wal-Mart juggernaut.

As reported in WWD Monday, Vornado is eyeing a last-minute bid for the struggling Sears that would top Kmart’s $11 billion offer. The Kmart bid, led by hedge fund wizard Edward Lampert, is due to close in mid-March and time is running out for Vornado to make a counteroffer.

As a result, the success of a competing bid at this stage appears uncertain. There are questions ranging from the structure of the deal to the purchase price, and even issues regarding how viable Sears’ stores would be for Target. There are also rumblings about whether sufficient time exists to pull together financing for a competing bid. But some sources speculated late last week that the bidding for Sears eventually could top $12 billion.

“I think the Kmart-Sears merger will go forward,” said a retail source. “It’s not in the company’s [Target’s] DNA. It’s a great opportunity, but it would surprise me if Target went after Sears.”

Yet real estate sources on Monday reiterated their positions about how one shouldn’t discount Steve Roth, chief executive of Vornado. One contact said, “Never underestimate Roth. He has strong access to capital.”

And while partnering with Vornado is a move that would be contrary to the typical Target maneuver, a real estate source said: “Forget about what these companies used to do. Ever since Jones Apparel Group bought Barneys New York, all these firms are thinking outside the box and analyzing strategies that they wouldn’t have considered before.”

Several hedge funds that said they were maintaining their positions in Sears stock are betting that Vornado makes a move soon. Of course, they favor any competitor for a Sears play since the shares of Sears are likely to increase in value should that bid come to fruition.

Officials at Target did not return calls for comment by press time Monday. A Vornado spokeswoman said, “I have no information,” when asked whether the company is teaming up with Target to make a run for Sears.

Assuming Roth can quickly get the financing in place, there are still questions remaining about how the deal might be structured and whether such a deal makes sense for Target. Target operates slightly smaller boxes off the mall, while Sears’ multilevel, mall-based stores are considered “way too big for Target,” noted one real estate contact.

One New York hedge fund executive pointed out that Target is heavily pursuing growth strategies on the real estate front, adding that the discounter seems to have figured out how to operate a multilevel store operation.

Target stores typically are on one floor, while Sears’ mall stores generally are on multilevels. Recently Target has moved into the mall-type format. For example, the Target at the mall at Atlantic Terminal in Brooklyn is one example of a multilevel format, while a store in Queens is another example.

Assuming the mall format isn’t a roadblock for Target, then the question remains about the structure of any deal.

An East Coast hedge fund player is banking on the components of Sears splitting into two parts, with Vornado holding the real estate portfolio and Target gaining control of the operating assets of Sears. “To do otherwise would mean Vornado runs the risk of losing its real estate investment trust status,” he said.

Such a structure, fund managers said, would have Target leasing from Vornado the stores that it operates. As difficult as it would be to pull off, there could be another scenario since Target seems hot for retail sites, sources said.

Another fund source in New York said that there are around “400 really good stores” within the Sears real estate base that would likely be attractive to Target, and that a possibility would be a separate carve-out where those stores would go directly to the discounter as part of any deal.

The net effect in that scenario would be a real estate play for both Vornado and Target, where each gets to cherry-pick Sears sites. The negative, since few see Target actually operating the Sears nameplate, could mean an eventual demise of the Sears brand from the retail landscape. However, if Target elects to join any Vornado bid, it would gain control of such major brands as Kenmore and Craftsman, which could be distributed through the Target chain, giving the retailer a competitive advantage over Wal-Mart in the battle for brands.

“It would be tough to negotiate a carve out in terms of Target actually taking over just a set number of stores that it would directly own because that would add to the complexities of the deal, particularly on how to value the carve out when you’re going to have counteroffers followed by counteroffers,” the East Coast fund contact said.

In the third-quarter conference call to Wall Street on earnings results that were posted on Nov. 11, Robert Ulrich, Target’s chairman and chief executive, told analysts that while the discounter completed all the real estate transactions in November that it had in mind for fiscal 2004, it continues to look for real estate opportunities.

“If anything, we’ll certainly be poised and ready, from a capital capacity and any other aspect, if an attractive block of real estate were to come available through whatever means that made sense to develop new Target stores, we would pursue that opportunity aggressively,” Ulrich said.

Vornado is said to be hot under the collar, since it was pursuing a Sears bid when Lampert, also Kmart’s chairman,  pulled a surprise out of the hat by announcing the merger deal last November.

And while a Vornado maneuver, if it were to succeed, could represent an exit strategy for Lampert’s investment in Sears, it would leave Lampert without an exit strategy for Kmart. That alone is a key reason why hedge funds are keeping close tabs on what could be an interesting two-horse race for Sears.

At a Glance: The Numbers on Target and Sears