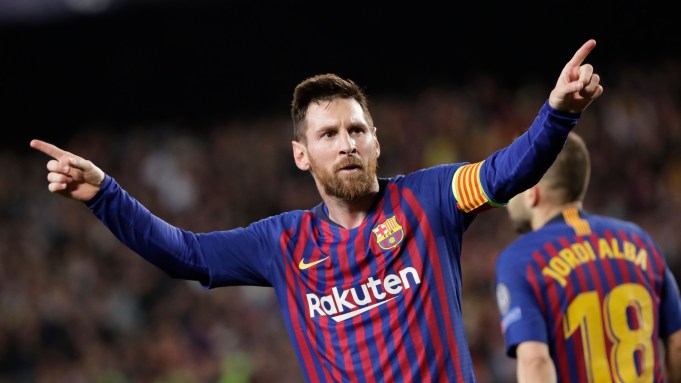 BARCELONA — Lionel Messi, arguably one of the most successful footballers of all time, celebrated the official launch of his fashion line, the Messi Brand, here on Thursday evening.

Messi debuted his functional and sporty main line, as well as a special collaboration with London Savile Row tailor Richard James, at Santa Eulalia, a high-end specialty store here that was established in 1843. Opposite from La Pedrera, a modernist landmark designed by Antoni Gaudí, the boutique is located at the heart of the city’s luxury retail district, neighboring Celine, Ermenegildo Zegna, Christian Louboutin and Dolce & Gabbana.

The store is tastefully decorated with full luxury offerings from the likes of Tom Ford, Valentino, Bulgari, Givenchy, and others — but also showcases hot brands of the moment, such as Zimmermann, Ganni, The Row, Wandler and Danse Lente. The shop will carry the Richard James x Messi limited-edition collection.

An hour before Messi made an appearance, the boutique was already surrounded by hundreds of Catalan locals, hoping to meet the captain of FC Barcelona who has a record 34 trophies. It’s clear that Messi’s fashion line launch was the event of the night.

“I like to explore different fields that are of interest besides sport. I always try to make the most of every opportunity to be a part of something new and exciting, so the launch of my lifestyle brand is something I am really excited to do and I hope that everyone loves it as much as I do,” said Messi. He was wearing a dark blue blazer and patterned shirt from the Richard James capsule with jeans and a pair of white Adidas Stan Smiths.

As first reported by WWD last May, Messi is the latest celebrity athlete to launch an apparel line. David Beckham, for example, formed a deal with the Hong Kong Fung family’s Global Brands Group to work with the British brand Kent & Curwen, while Serena Williams launches her brand last year.

Messi’s venture is a partnership with MGO, a brand portfolio company whose chief creative officer is Tommy Hilfiger’s sister Ginny Hilfiger. She worked at her brother’s company for 20 years until 2005, and played a key role in successfully launching the recent Hilfiger x Gigi Hadid collections. She is also the creative director of the Messi Brand.

The idea of creating a collection with Messi started with MGO’s chief executive officer Maximiliano Ojeda who, like Messi, is Argentinian and grew up following the sport. “Leo is the greatest football player in the world and still has a lot of years left to play,” she said of the 32-year-old legend. “Also, he is recognized globally by all types of people, even people who don’t watch football.”

Hilfiger added that “we just thought it was like a perfect match for us to do a brand with Leo Messi, because you know I learned from the best, Tommy Hilfiger, and I have global experience from Fila. I globally rebranded them and I had my own line with Fila China for five years. So when Max said, ‘Hey, why don’t we do something with Leo Messi?’ I was like, ‘Perfect!’ because that’s exactly what my background is — lifestyle and sports. And he’s the best player in the world and his values are very similar to Tommy’s. They are both super successful, a family man, humble, kind and they give back. I wouldn’t just work and design for a brand with anybody. I love working with Leo because Tommy and Leo are so alike.”

The lifestyle brand offers primarily men’s wear, such as T- shirts, sweatshirts, hoodies and jackets and high-performance polos and pants, but also includes a few women’s tops. “We are launching with about 15 styles and about 60 sku’s,” said Hilfiger.

She emphasized at the preview that the Messi clothes are made of top quality materials. “This is a double-faced cotton hoodie. It’s got the laser-cut Messi logo bonded print on the arm with contrast chunky zippers,” she said, pointing at a mannequin. “It’s a poly-cotton Lycra blend and it’s made from the best cotton in China.”

Hilfiger also developed a signature neck tape with the Messi family, a combination of the Barcelona and Argentina colors. The other signature of the collection is the use of the pentagon shape, which comes from the soccer ball. “I use that for the all label pieces and the patches and the prints. So that’s like a big part of our DNA,” she added.

The price points are meant to be accessible. A pair of breathable knit chino pants retails for $140, the hoodie Hilfiger showcased is under $200 and a stencil T made of mercerized fine and high constructed cotton sells for $80.

The Richard James capsule is at a higher price point, however, with a blazer retailing for around $780 and a shirt $210.

Hilfiger said there will be some items in the mix that will be autographed by Messi “so the lucky customer will get a signed Leo piece.”

After the launch, the label will be primarily sold via its official web site. In China, it will open a store on Alibaba’s business-to-consumer platform Tmall in October.

For the U.S and European markets, “we may go to other e-commerce sites like global fashion group Zalando and Amazon. We also want to continue to do these special collaborations with different shops,” Hilfiger said.

Messi is widely viewed as one of the greatest soccer players of all time. He has spent his entire professional career with Barcelona with more than 130 million followers on Instagram. He’s also known for his philanthropic work. He partnered with UNICEF and has also created the Leo Messi Foundation, which supports access to health care, education and sport for children.

The brand is also a true Messi family business: His sister María Sol Messi works as brand manager. A frequent shopper at Santa Eulalia, Messi believes this is a great opportunity for her to launch her career in fashion.

“I’ve always followed and studied fashion trends, so I am delighted to be getting the chance to bring that experience, as well as my knowledge of Leo as a person, to the Messi Brand. I can’t wait for the results of everyone’s work to be revealed to the public,” she said.