NEW YORK — “I cringe when I think things don’t look real,” Generra designer Tony Melillo said. So instead of a smoke-and-mirrors fashion show, Melillo and his longtime friend Kelly Klein conceived a book based on the casual... 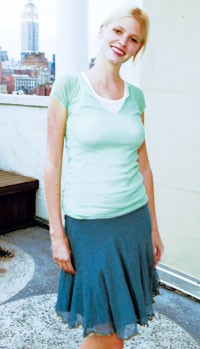 NEW YORK — “I cringe when I think things don’t look real,” Generra designer Tony Melillo said. So instead of a smoke-and-mirrors fashion show, Melillo and his longtime friend Kelly Klein conceived a book based on the casual instant photos that the pair often take. And to celebrate the result, called “Polaroids by Kelly Klein,” they threw a book party-cum-fashion show last week on the rooftop of the Maritime Hotel.

The slim, matte volume, designed by Sam Shahid, is filled with dreamy images of boys and girls dressed in Generra’s spring line, interspersed with stills of orchids and flowering trees. Though Klein’s images do benefit from the ultracool styling of Camilla Nickerson, Melillo noted that, in a departure from most fashion shoots, they dispensed with both a hairstylist and a makeup artist. “I think we captured the feeling that we were going for,” Melillo said. The book seemed to be a hit with the rooftop revelers, some of whom even asked Klein to sign their copy.

As for the clothes, Melillo decided at the last minute to show off a few in the flesh. But in the gathering crowd, you almost missed the few long-limbed models dressed in candy-colored T-shirts, skirts, dresses and even a few of the jeans that he plans to launch this week. Melillo is a photo buff, and he cited photographer David Hamilton as an inspiration for the line. “You know the way things hang off the body in those pictures?” he said. “It just has a really soft and easy vibe.”