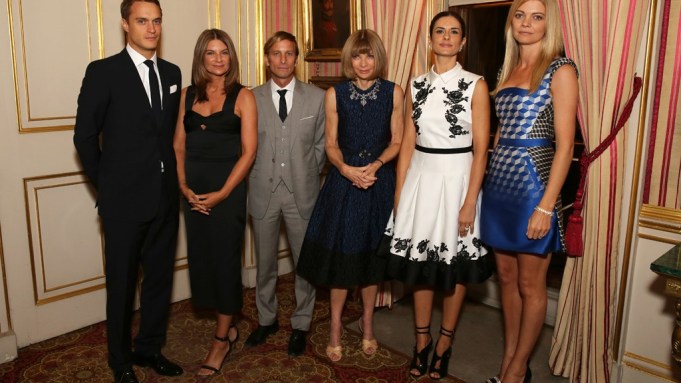 GOOD CAUSE: Livia Firth, Natalie Massenet and Anna Wintour joined forces at London’s historic Apsley House, the home of the first Duke of Wellington, to raise awareness for the Global Fund — an international financing institution dedicated to raising funds to prevent and treat AIDS, malaria, and tuberculosis — and to launch Firth’s Green Carpet Challenge (GCC) collection.

Firth, wife of actor Colin Firth, enlisted five British brands to create dresses designed to meet social and environmental benchmarks developed by the GCC. Christopher Bailey for Burberry, Christopher Kane, Erdem Moralioglu, Roland Mouret, and Victoria Beckham each created two dresses for the initiative — one gown and one cocktail each — which will be sold on Net-a-porter from today. For every dress  sold, Net-a-porter will make a 20 percent donation to RED, which channels funds to help prevent the spread of AIDS from mother to child through the Global Fund.

“This partnership is a natural one,” said Firth, who is more known for her eco-awareness campaigns than for health-related initiatives. “Garment workers in the third world are among the most affected by these diseases.”

The idea for the initiative came about when Firth was in Paris for the shows earlier this year. She was bemoaning the challenges of dressing for the red carpet awards season in an ethical way, and in line with her four-year-old Green Carpet Challenge (GCC). “I was saying that it would be so much easier if I had a bank of dresses to work from and Anna said, ‘Why don’t you make it happen?’”

Firth and Wintour worked together to bring the designers on board and Massenet was quick to offer to retail the collection on the site. “Anna and Natalie can see into the future,” said Firth. “If they get behind ethical fashion, then I can retire [from raising awareness of sustainable and ethical fashion].”

At the event, Massenet voiced her gratitude that the British fashion industry “is able to play its part in using our voice and influence for good.”

Dr. Mark Dybul, executive director of the Global Fund, explained that he wanted to harness the power of the fashion industry in the U.K. to spread his organization’s message. “The fashion industry was hit hard by HIV, and the people here are responding to that,” he said. “We need to get the message out about this historic opportunity to end HIV, tuberculosis, and malaria. Today we can say that we can see the end of HIV, tuberculosis, and malaria as epidemics. We can’t do it alone, the world’s got to change, we need everyone, we need this industry, we need our ability to end these diseases today, we can do that if we do it together.”

Dotted throughout the lavish entertaining rooms of Apsley House were some of the gowns, displayed in installations curated by Lady Amanda Harlech. Kane’s design, a mushroom satin strapless sheath with crystal embellishment under the bust, was displayed on a bed of white feathers — and giant eggs.

“You kind of assume that ethical fabrics are going to be very heavy or fibrous, but I discovered all these amazing Italian mills doing beautiful, rich fabrics,” said Erdem, who dressed Firth for the evening in a black and white cocktail dress made from ethically-produced silk.