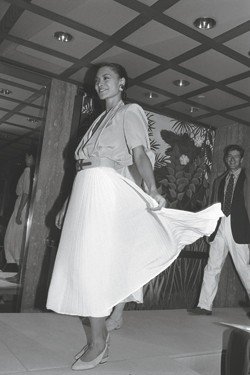 The Gucci saga has been quite an excursion, rife with soap opera-worthy moments at every turn — and we’re not talking only about the family feuds, mayhem and hostile takeover battles. In the past 85 years, Gucci’s wares have revealed much sartorial drama, swinging from sweet florals in the Sixties to logo mania in the Eighties. The revamping of this venerable house began in the Nineties with Richard Lambertson’s revised classics, and then the Gucci name exploded, thanks to Tom Ford, who delivered one sexpot thrill after another. Now in the hands of Frida Giannini, the brand has gone from garden prints to yet another version of Gucci’s signature sex appeal. Here, and on the following pages, a look at the house’s many faces.