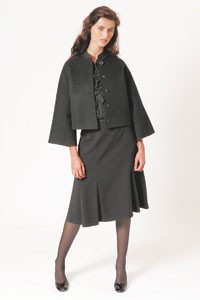 NEW YORK — Liz Claiborne, faced with growing competition, is getting a style makeover.

The better sportswear brand, which represents about $1.1 billion in annual sales, or 24 percent of the company’s $4.85 billion portfolio, has been dealing with some major competition on the retail floor in recent seasons. With labels such as Michael Michael Kors, Lauren Ralph Lauren and Nine West demanding more floor space and Nautica and City Unltd. new to the fray, the arena is filling with more fashion-savvy brands. After months of consumer research, the brand is now on target for a more fashionable fall.

The company began by hiring a new creative director, Richard Ostell, in March 2005. He comes from a design background, working for companies like Nicole Farhi and partnering in Flyte Ostell, a London-based fashion house, and brings a more style-conscious eye to the Liz Claiborne collection. Ostell added more value to the garments, including beaded jackets and sequined sweaters. He also has designed a collection of limited-edition garments that will only sell in 40 top-selling doors throughout the country. This collection includes a shearling jacket, which, at $499 retail, is the most expensive piece in the line.

“This brand has enormous awareness and recognition — we are just building on that,” said Pamela Thomas-Graham, group president, better and moderate department store brands, Liz Claiborne Inc. “What we found through this research was that we needed to pay more attention to detail, refine the design and add to our career and special-occasion selections.”

Thomas-Graham said that, in some ways, the brand is returning to its roots. When Liz Claiborne founded the brand in 1976, her mission was to outfit women for work in an appropriate and affordable way.

“In the past, this brand was heavy on career,” she said. “Now we are rebalancing to focus more on refined casual and career clothes, but in a modern way, to serve the modern consumer.”

The result is a collection of better sportswear using more expensive fabrics than in the past. Such is the case with the silk and nylon sweaters, Victorian-inspired lace skirts and blouses, double-faced wool jackets and pants and silk blouses.

This story first appeared in the March 15, 2006 issue of WWD. Subscribe Today.

The line wholesales from $25 to $100, with a couple of the limited-edition pieces wholesaling for as much as $250. Thomas-Graham said the pricing of the line has not changed. She said the company was able to do this through its worldwide sourcing. Some of the brand’s key accounts include Macy’s, Dillard’s, Belk and Carson Pirie Scott.

“The research showed us that these women wanted more fashionable clothing and they said, ‘Look, you have to give us fashion in these small towns,'” said Denise Johnston, president, chief merchandising officer, better and moderate department store brands. “Just because they didn’t live in big, fashionable cities didn’t mean they weren’t interested in fashion.”