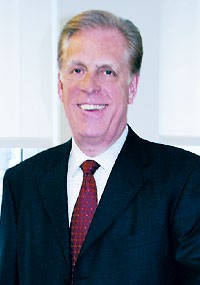 NEW YORK — Keeping up growth in the consolidating fashion world has been one of Liz Claiborne Inc.’s specialties under chairman and chief executive officer Paul Charron, but great performers often are their own toughest act to follow.

Claiborne has built a diverse portfolio of more than 30 brands, including Juicy Couture, which are growing and profitable even as sales of the core Liz Claiborne line have fallen and licensing agreements for sportswear lines under the Kenneth Cole and City DKNY labels have declined in importance.

Keeping pace with Claiborne’s overall momentum will require the ability to explore avenues of growth and ideas. Analysts credit Claiborne’s management with displaying this flexibility. Company executives acknowledge that its size can be a strength as well as a challenge.

To counter the falling sales of the core Liz brand, the company plans to increase its business in Europe, making more and possibly larger acquisitions, and developing brands.

Sales of Liz-branded merchandise contributed “somewhat less’’ than $1.7 billion, or 40 percent of the firm’s $4.2 billion in revenue last year. The amount was about $2 billion, or 90 percent, when Charron joined the company from VF Corp. in 1994.

Charron said the Liz brand is still the “jewel in the crown,” and he stayed with that theme during an interview in his corner office on the 21st floor of 1441 Broadway here. Sitting behind a desk covered with papers, Charron, who does not buy into the theory that brands have a life cycle, said the Liz label, if handled properly, can live on in “perpetuity.’’

“The Liz brand, as far as I am concerned, is not in a state of decline,” Charron said. “There’s some rationalization, as department stores realize that they cannot order more than the customer will purchase, and that companies like Liz Claiborne Inc. will not subsidize excess inventories.”

Sales of Liz-branded merchandise fell 12.2 percent in 2003, amid a repositioning that consolidated its collection, Lizsport, Liz & Co. and Lizwear subbrands into one master label and a regimen of fewer markdowns. The Lord & Taylor chain has dropped the misses’ sportswear portion of the Liz brand as part of its strategy to attract more affluent customers.

Prudential Financial analyst Liz Dunn, who has assumed coverage of Claiborne, wrote this month in a research note, “Liz has been very realistic about its core business, planning it down and giving investors and analysts visibility about the tough situation.”

Nancy Caplan, vice president and general merchandise manager of Marshall Field’s, a division of Target Corp., said the switch to one Liz brand was an improvement.

The label “needed to make a move,” she said. “It’s much easier when you see it in the showroom, even for us to understand and the buyer to digest. It’s more fashion, it’s more trended, and some of the quality looks better.”

The Carefree portion of the line, which is easier for the consumer to clean and keep, has been a good addition at Field’s, Caplan said. “It’s a brand I want,’’ she said. “Our guests want it. They’re the ones who vote.”

However, Claiborne is increasingly defined by its acquired brands, such as Ellen Tracy, Lucky Brand, Enyce, Laundry by Shelli Segal and Juicy Couture. They are expanding into product categories such as accessories, and developing distribution channels, including specialty retailing.

Likewise, Claiborne makes City DKNY better sportswear under license from Donna Karan International. Claiborne said in filings with the Securities and Exchange Commission that the license is not expected to be renewed at the end of next year. The DKNY Jeans and Active license runs through 2012.

In general, Charron said Claiborne prefers to own rather than “rent” brands, since it’s just as expensive, but less profitable, to develop a licensed name than an owned one.

As a lower-return model, licensing brands from other companies doesn’t necessarily mesh with Claiborne’s goal, which is to grow. Though its large portfolio gives the firm stability and allows it to even out the peaks and valleys in product categories, it requires a larger volume to keep investors happy.

Claiborne has told Wall Street sales may swell by as much as $339.3 million this year, an 8 percent increase. On Tuesday, shares of the firm rose 0.4 percent to $38 on the New York Stock Exchange. The issue has risen 22.9 percent over the last 12 months and 315.3 percent over the last decade.

To move the needle, Claiborne is learning some new tricks and taking some twists on old ones.

In addition to expanding brands by product category and distribution, such as moving Juicy Couture into accessories and working on the first stores devoted to the brand, Claiborne is working on international expansion.

Claiborne’s second-largest brand, Mexx, based in the Netherlands and acquired in 2001, is providing a backbone for the company’s European growth.

International sales account for 22.1 percent or $936.5 million of Claiborne’s sales. More than $670 million comes from Mexx. Overseas sales should grow more as labels such as Ellen Tracy, Enyce and Lucky Brands take on Europe. Eventually, the Liz brand, which has a European presence, mostly in Spain, is also expected to make use of the Mexx infrastructure to expand.

“Recognizing that very few U.S.-based companies have had notable success in Europe or outside of North America, we’re going to hitchhike on the capabilities of the people, the processes and the platform we have at Mexx,” Charron said.

Claiborne is also evolving the Mexx organization, cross-pollinating it with executives, processes and philosophy, and preparing it to handle several brands, some possibly from European acquisitions.

Rattan Chadha, president and chief executive of Mexx International, heads the European operations, which are increasingly being set up to act as a smaller version of the Claiborne company.

“It’s a complex enterprise, but in managing complexity, we think we gain competitive advantage,” Charron said. “Essentially, what we do is the design and sourcing — the merchandising and presentation of fashion apparel and accessories has nothing to do with channel or brand or geographic boundaries. Those key tasks don’t have any boundaries. The challenge of managing that enterprise is managing it across boundaries.”

Equity analyst Jennifer Black approved of the measured way in which Claiborne is moving into Europe.

“By acquiring Mexx they learned a lot,” she said. “It was a brilliant move. Now they have the people and the knowledge of the European markets.”

Learning the local market would have been one of the largest hurdles for Claiborne in Europe had the company not made that deal, Black said.

Europe isn’t the firm’s only focus, however.

Domestic acquisitions, especially those in accessories, retail and men’s, are also part of the picture. A larger acquisition than has been the norm for Claiborne would also help maintain growth. Mexx is among Claiborne’s largest deals, having carried a price tag of about $255.1 million in 2001, plus a contingent payment that, while dependent on financial performance, might be about $180 million.

“We could do a billion-dollar deal,” said Charron, adding that the firm will not stray from its policy of making financially attractive purchases with manageable risks.

“I’d love to do a larger deal,’’ he said. “It’s hard to make the smaller deals add up to drive the top and bottom lines, but that’s what we’ve done — this combination of organic and acquired growth. That’s what we’ve done for the last 10 years. Will we do that for the next 10 years? Not sure. Are our strategies evolving? Yes, very definitely. I don’t view this as a tipping point or an inflection point. I simply view it as another step in the journey, which is the evolution of this company.”

In addition to acquisitions and international expansion, this evolution includes creating brands, such as Realities and Swe, coupled with more flexible operating models to guide them.

“The strategy speaks to Liz’s nimble organization, as the company moves in the direction of demand instead of standing idle in the face of its declining flagship brand,” Prudential’s Dunn said.