Instead of following industry protocol, London's designers felt free to stay closer to their own personal values and desires for spring 2021.

LONDON — This was a London season of mixed emotions and many question marks.

With new government restrictions forbidding social gatherings of more than six people, most of the city’s designers embraced the film format for the first time, with just a handful of one-on-one appointments hosted on the side.

Just like London fashion, which can vary from classic to completely kooky from one calendar slot to the next, designers’ take on the genre was varied, ranging from abstract narratives to dance routines, or catwalk experiences captured for the screen.

But the general consensus was a positive one, with most designers talking about feeling relieved or even liberated to no longer have to deal with the pressure of the runway and have a new outlet to push their artistic boundaries and speak about the effects of lockdown.

Their presentations were deeply personal, from Thea Bregazzi and Justin Thornton’s collection — which was designed alongside their two young daughters and filmed on family friends — to Emilia Wickstead, who drew inspiration from a book found on her daughter’s nightstand, and Christopher Kane, who turned the artworks he painted during lockdown as a way of working through his anxieties into a capsule collection of one-of-a-kind pieces.

Some didn’t even show any clothes, like Richard Quinn, who just teased his upcoming collection with a 20-second clip of a rose shattering into pieces and JW Anderson, who filmed friends shopping in the brand’s Soho store, or up-and-comer Eftychia, whose video showcased two women walking into a room and pouring themselves a drink, dressed in the sharp, mannish tailoring she is known for.

As for Marques’ Almeida, a collection presentation gave way to a magazine that presented a series of stories featuring friends of the brand sharing their lockdown stories and the brand’s new sustainability manifesto, outlining the label’s ambitious goals in detail. They range from moving to digital printing and the use of only certified materials by 2021, to paying all external collaborators a minimum versus a living wage.

In short, designers were staying closer to their own values and desires, having grown aware of the industry’s fast-paced demands.

“I’m back to my instincts and what feels right, not complying with what the industry expects — which is a false economy. I’m doing what I want to do and you might like it or you might not, but we can’t make everyone happy, which was the challenge we tried to [tackle] before,” said Kane. 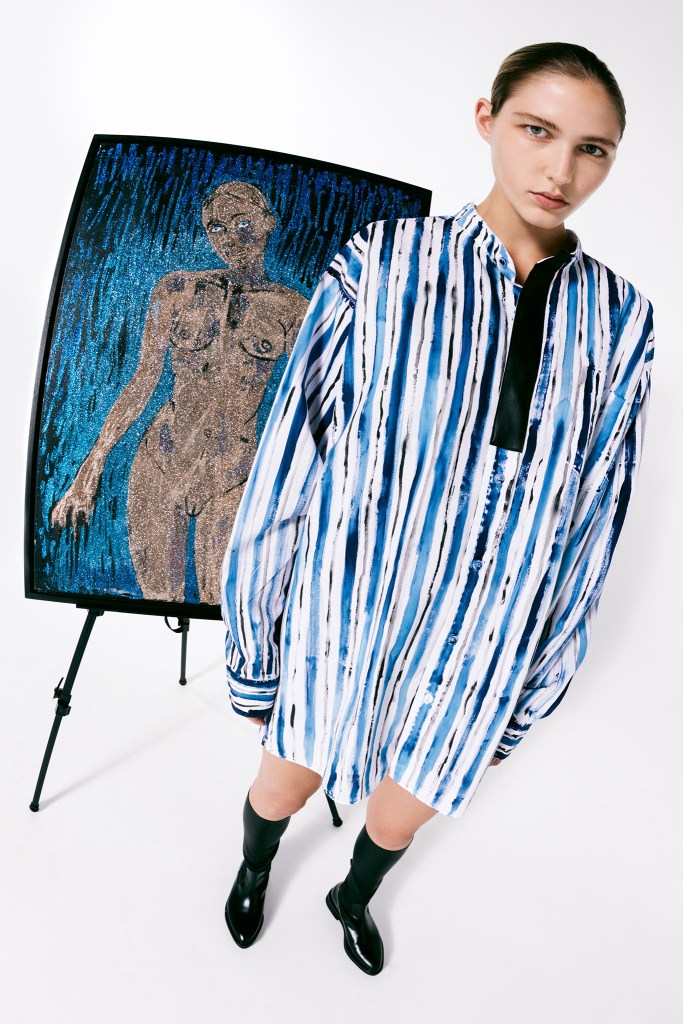 For emerging designer Charlotte Knowles, there was also an opportunity to explore techniques such as whipstitching and braiding, while her film paid homage to her community, featuring girls she was inspired by and who had previously worked with the label.

“Having the time, it’s kind of a silver lining, we were able to reprocess and use this as an opportunity to produce something meaningful,” she said.

Similarly, JordanLuca worked with seamstresses and pattern cutters in their network to highlight the importance of craftsmanship and working together as a community in times of adversity.

The film reflects this attitude, showing models in solitude going about their daily routines as recordings of musings and positive affirmations play in the backdrop. Positivity is reflected in the clothes, too, as floral prints adorn knitwear and long-sleeved shirts.

Other designers took a less abstract path to show their positive hope for the future. Mark Fast’s collection was a medley of bright, neon colors and Nineties silhouettes, such as tube dresses and denim miniskirts the designer said created a sense of new optimism.

“While I was in quarantine, I had time to think back about moments like going raving where you felt free and liberated. I think we all want that, we want to be free of this pandemic and to have hope, so I wanted to create hope and a little bit of rebellion,” Fast said.

Second-generation British-Indian designer Supriya Lele’s collection features a series of sexy, feel-good dresses, and a suede coat with a band logo reinterpreted from an Indian graphic designed by her friend. The entire collection was made from existing stocks in her studio in south London.

“I want to keep the collection concise and tight,” Lele told WWD. “I wanted to create newness with the capability that we have and not overload my tiny team. I want to make sure that everything was super worked into, beautifully considered and nicely designed.”

Deborah Lyons also opted for brand signatures, like tailoring or laid-back shirt dresses, and added hints of sexy and fun in the form of corsets layered under suits or more daring cutouts on evening dresses — her aim being to channel a more playful spirit to the spooky atmosphere everyone is currently navigating. 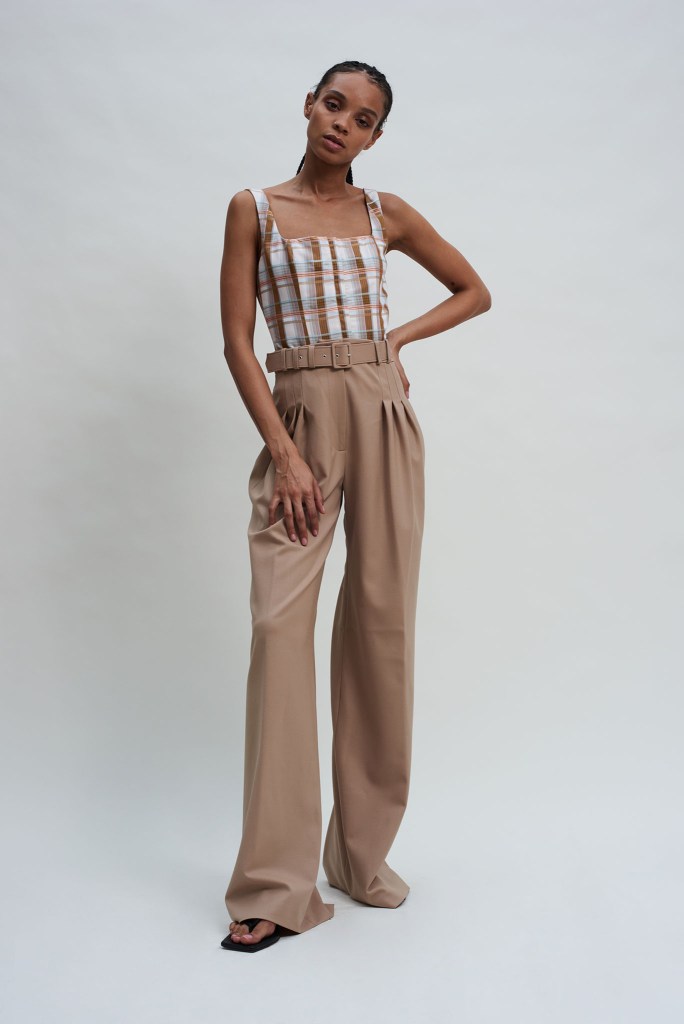 Lyons will be taking her collection to market and teasing it on her social platforms, but her focus will be on promoting the season through a campaign and serving her audience directly, having spent much of lockdown connecting with them and hosting everything from live conversations to online wellness festivals.

Other designers used dance as a means of expression. On|Off’s film featured a male dancer against a changing tonal backdrop, moving and posing in unison to the film’s narration that posed powerful statements asking the viewer to rethink the status quo.

Danshan presented a contemporary dance number in collaboration with Luke Farley in search of the answer to what it means to be free. The dancers moved freely in their spring designs, which included georgette and satin shirts intertwined by embroideries and treated distressed by hands.

Richard Malone’s short showed the beauty of movement as three dancers tapped their way in and out of the screen in ruched dresses, long overcoats and two-piece sets, such as a khaki blazer and midiskirt. Subtle gestures such as the swaying of hips really highlighted the drapery in his clothes.

In keeping with the feel-good approach and making the use of the digital platform, Stephen Jones and Hill and Friends took this time to experiment with technology.

Hill and Friends used stop-motion techniques to give life to their bags and inanimate objects. Milliner Jones presented his spring collection on his newly designed avatar, Noonoori, who models items such as a leopard-print blue cowboy hat, a visor fashioned with straw and a fascinator inspired by one of his favorite films, “Fantasia.”

Some designers took the opportunity to highlight social and diversity issues in their films.

Phoebe English, an advocate for sustainability, used her film to reexamine her design ethos. “How can we begin to evolve from sustainability-minded design to designing with regenerative outcomes?” she asked.

Titled “Nothing New,” the film shows the beauty in reclaimed and deadstock fabrics by focusing on 360-degree detailed shots of her new collection. 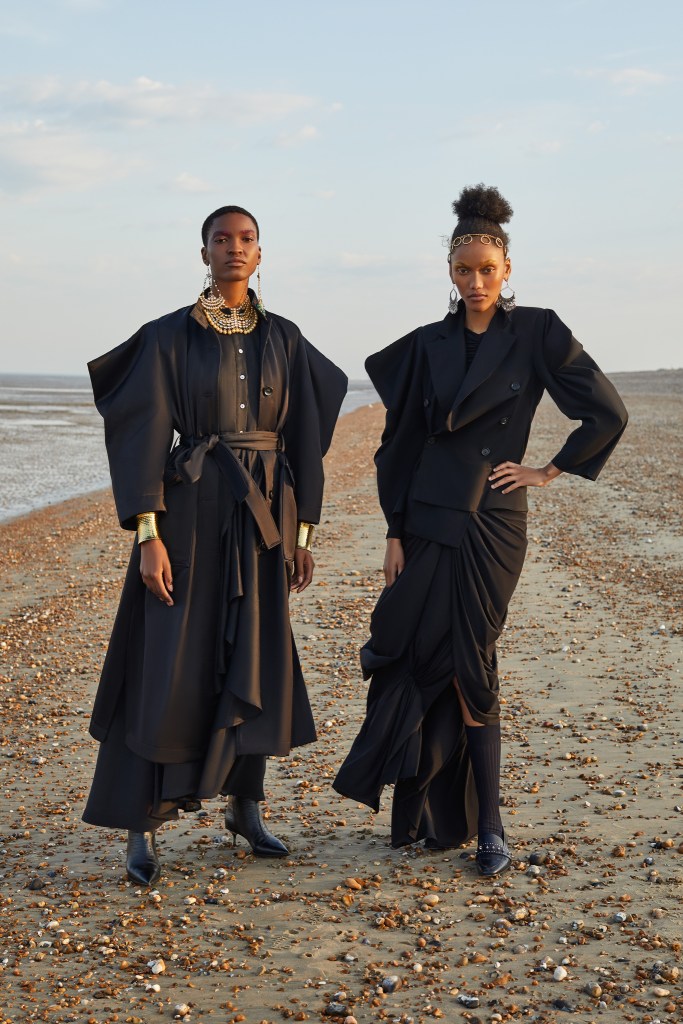 Osman Yousefzada made a film called “Here to Stay,” with Makayla Forde, who is studying for a Ph.D. in Black women’s health. The film shows models on the beach and outdoors modeling pieces from Yousefzada’s latest collection.

During the three-minute short, Forde reads aloud a poem that is a rallying cry for minority and immigrant communities living in Britain, with the legacy of Western imperialism. She says: “Look at me. Listen. Get used to what you see. I am more than Kipling’s ‘White Man’s Burden,’ I am free. I am here to stay.”

The designer said going forward, he’ll be working in a more inclusive way and said “business should be a Silk Road, bringing wealth to everyone along the way. Luxury should not be at the expense of others or a cost to the planet. Fashion should be about the creation of human value from weaver to wearer.”

Michael Halpern highlighted nurses, London Underground drivers and hospital workers in London with his film “The Heroines of the Front Line.” He dressed eight women from across the public service sectors in his jazzy spring collection, and asked them to model the clothes — and talk about their work and its challenges. He described his collection as a reflection of the women’s “individuality, courage and joie de vivre.”