A boyfriend’s complaints drove Geren Lockhart to try her hand at designing loungewear. Three years later, she has a growing business. 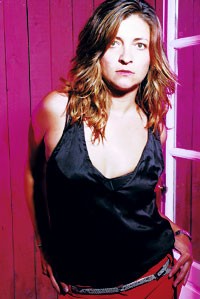 Los Angeles — As Geren Lockhart, yet again, eased into her favorite comfort staple after a grueling day representing directors in the hyper-chaotic arena of advertising production, her boyfriend nagged her, yet again, with his edict: “No more grandma pants!”

Rolling her eyes as she recalled that memory of three years ago, Lockhart, 31, replied: “But they were Margiella. Not that he cared. So I finally made a pair of drawstring pants we both liked.”

She soon cut herself a pair of shorts and a tank top. And, when she began wearing them outside her Brooklyn apartment, associates and friends requested their own, then the friends of friends, among them Cameron Diaz and Kate Hudson. Before long, a side project turned into a business that now counts a 35-piece fall collection of casual luxe items cut only of natural fibers.

There are silk racer tops and miniskirts, both drawstring, in chevron and pin-dot prints; poplin long-sleeved Henleys; itty-bitty silk bralets and cotton briefs, and jersey halter-style dresses with a drawstring empire waist. The line wholesales from a $13 silk thong to an $82 lounging tuxedo pant in flat silk with a shiny stripe.

Ross ordered fall, as did Satine in Los Angeles, Barneys and American Rag and Barneys in Japan, and resort shops such as Fifi LaRue in the Hamptons and Toff in Miami.

Projected sales for 2005 are $350,000 to $450,000. Lockhart is in negotiations with manufacturing partners to help produce the line. And she is considering whether to bow in spring 2005, now in progress, on the runway at Los Angeles Fashion Week in October.

Lockhart opted to retain some sense of anonymity by naming the brand Geren Ford Brooklyn-Hollywood, partly after her birth father, artist John Ford, who died in 1996. Ford relocated to New York from Northern California two decades before when his paintings made it into the Whitney Biennial, beginning his daughter’s lifelong residential split between both sides of the country. (Lockhart is her stepfather’s name.)

She now lives primarily in Hollywood.

With the new line taking off, Lockhart took courses at Parsons in New York and the Otis School of Design in Los Angeles to figure it all out, at the same time representing directors for Partizan, an agency co-owned by director Michelle Gondry (“Eternal Sunshine of the Spotless Mind”). “It was an intense existence, going to school and having a gnarly exec job,’’ Lockhart said. “But it definitely confirmed for me that I wanted to be a designer.”

Even so, as her next phase as designer takes off, Lockhart continues to split her time between designing and styling. She has since moved from representing directors to wardrobe styling ads for high-profile accounts such as Infinity automobiles and Budweiser beer. That keeps her globe-trotting most of the year. (During the interview she was on a break from shooting a commercial in San Francisco and would be leaving for Argentina within days.)

Yet the fledgling company is always on the front burner. “This is a lifestyle line, so I’m always considering what I want to have around, not just what works from season to season,’’ she said. “I even wash everything — the jersey, the stretch silks and cottons — before it’s sewn and do whatever it takes to produce pieces that won’t fall apart.”

Lockhart dreams of an empire beyond Brooklyn and Hollywood. She is already planning housewares for travelers, stationery, bedding and towels. Some day she would even like to collaborate on designing boutique hotels.

“I design around the idea of the jet-setters, the aspiring Talitha Gettys of the world,” she said. “It’s a life so many more of us today engage in.”

To wit, Lockhart includes her boyfriend and the rest of the male population in that group of movers and shakers. She recently introduced men’s drawstring pants.