London Cleans Up, Pares Down for Fall

Young consumers here are turning their backs on heavily embellished, distressed and boot-cut denim in favor of a clean, straight-leg look, with the more adventurous taking on the ultraskinny, drainpipe leg. 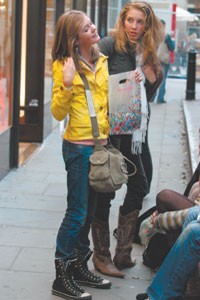 LONDON — Young consumers here are turning their backs on heavily embellished, distressed and boot-cut denim in favor of a clean, straight-leg look, with the more adventurous taking on the ultraskinny, drainpipe leg.

“We’re seeing a move away from the boot cut,” said Hayley Wiltshire, casualwear buyer at Selfridges, which carries labels such as Sass & Bide, James Jeans and Earnest Sewn. “There will always be a customer who’s loyal to boot cut, as it suits a fuller figure, but we have definitely seen a dip in sales [in boot-cut styles], whereas Sass & Bide’s Frayed Misfit jeans [a tight, skinny-leg jean] just fly out of the store.”

Brix Smith-Start, owner and buyer at Start, a women’s and men’s wear boutique in London’s Shoreditch area, which carries labels such as Rag & Bone and Superfine, as well as offering a denim fitting and alteration service, agreed. “In terms of trends, that flared boot-cut leg is over,” said Smith-Start. “However, some customers can’t get their head around the skinny and straight leg, as they feel pear-shaped, but if they balance out the silhouette with a voluminous tunic top, then it is an easier cut to wear.”

Smith-Start credits the now-controversial Kate Moss, whose wardrobe is a weekly feature in U.K. celebrity magazines, with single-handedly pioneering the skinny-leg trend among young consumers. “[Moss] has fantastic personal style. Girls just copied her,” said Smith-Start. “She is so important to the industry. The power of that girl wearing something is phenomenal.”

An informal survey of students around Kings College, London, bore this out. While boot-cut jeans are clearly not over for all, their figures were dwarfed by the number of young women in straight-leg and drainpipe jeans, from brands such as Topshop, Miss Sixty and Levi’s, in simple washes that ran from pale faded blues to very black and dark blue.

While younger mass fashion brands such as Topshop and H&M have recently brought out versions of straight-leg and drainpipe jeans, which retail at around $70 at Topshop and $53 at H&M, buyers report there is no resistance among young consumers to the premium denim versions. Newer denim brands, such as Sass & Bide, U.K. brand Superfine (reportedly Moss’ favorite) and Swedish brand Acne are popular among young women, and retail for between $230 and $240.

“If it’s on trend, then there’s no price resistance,” said Wiltshire, who added that if the brand has had positive press coverage, there is even less resistance. Wiltshire also pointed to Selfridges’ younger Spirit section, which carries straight-leg jeans with lower price points, such as Levi’s Patty Anne jeans, which retail at approximately $140, and Lee’s Norma jeans, which retail at approximately $105. “If a younger customer wants to buy into the straight-leg trend, then those are nice entry price points,” said Wiltshire.

However, buyers acknowledged the trend for skinny-leg jeans is just that — a trend — and doubt it will have a similar run to that of the boot cut.

Start-Smith also predicted the straight-leg jean will become the longer-term choice for young women, citing Earnest Sewn’s Hefner as a flattering slim-leg jean. Wiltshire and Smith-Start also agreed that, despite the current slim-leg trend, two schools of denim among young London consumers remain. “There will always be the customer for distressed denim,” said Wiltshire, who added that detail-heavy denim brands such as True Religion sell most of their jeans at Selfridges in the Joey boot-cut styles. Smith-Start referred to the distressed, embellished denim trend as “very footballers’ wives,” a byword in London for the glitzy style favored by Victoria Beckham and her cohorts.