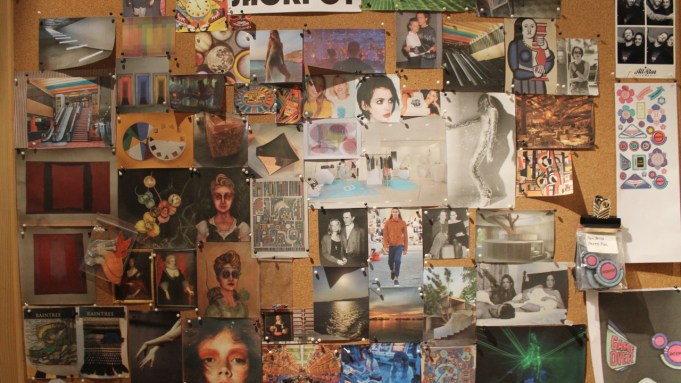 “This collection is about art or elements of it. The woman who became this season’s muse is all about art, money and sex!”
— Peter Jensen

“We are exploring anonymity for fall. We looked into the Situationist movement and vapor wave for inspiration. The antidigital aesthetic of Nathan Peter’s work, which we also explored last season, has filtered into the colors and textures of the collection.”
— Levi Palmer, designer, palmer//harding

“Fall is about girls I know and girls I wish I knew. [Girls] standing against a pinball machine, cheering on their boyfriend while sipping on a Diet Coke. Weight shifted to one hip, one hand, one shoulder, knowing that it’s almost past their curfew and they won’t ever make it home on time. But they have one last quarter and it has to be spent.”
— Alexander Lewis

“The silhouette is relaxed and the palette is warm — shades of camel broken with crisp white, opaque black and charcoal. Mannish high-waisted trousers are pulled in by bridle leather belts and worn with pretty velvet slippers; argyle jumpers are knitted in Scottish cashmere, and A-line skirts are teamed with tough sheepskin-lined ankle boots.”
— Margaret Howell

“A return to simplicity, utilitarian, life in a cold landscape.”
— Edeline Lee

“Old couture shows like Dior and Thierry Mugler, brown taffeta, dressing up and being undressed, getting ready for a theater performance.”
— Molly Goddard

“This season I’ve drawn inspiration for three-dimensional embroideries, colorful 18th-century German botanical gardens, majestic birds of paradise and black-and-white collages of flowers. My prints are inspired by the vivid works of Degas’ ballerinas. The collection comes to life by combining artistic beauty and technology.”
— Alice Archer

“Fall is inspired by the artist David Inshaw, drawing inspiration from his world of Seventies other-worldly references and his love of women. The  palette comes from his lush, rich shades and the deep tactile tones of his paintings. Cutting is inspired by sportswear from the same era, referencing utilitarian detailing and cuts through the outerwear and finishing on garments. Fabrics are textured; velvets and jacquards combine to reference the graphic signature of the brand in a new way, and embroidery embraces pieces from top to toe. Accessories keep the same family of fabrics and motifs to create a tight collection reflecting our ethos and aesthetic.”
— Holly Fulton

“Intricate use of light captured the essence of the Amanda Wakeley woman for fall. The palette also veers toward darker tones, maintaining a contemporary and graphic [style], highlighting the architectural inspiration behind the collection.”
— Amanda Wakeley

“I combined clean, straight lines and curves to achieve nonconventional elegance — feminine tops with bold stripes and skirts with interesting folds. I focus on what lies underneath and not just on surface decoration. Each piece may look simple, but the pattern-cutting, technique and garment construction that went into achieving this simplicity were labor-intensive. The colors and juxtaposition of shapes seen in Ellsworth Kelly’s work is so inspiring to me. This season, you’ll see a new take on our print.”
— Rejina Pyo

“Belstaff turns its attention to the great polar expeditions. Inspired by female adventurers, we were drawn to Edith ‘Jackie’ Ronne’s great Antarctic expedition of 1947 — the first woman to be a working member of an Antarctic expedition. This collection is celebrating her spirit with a mix of references, influenced by the wintry textures of snow, icebergs and rocks. Moto leather pants are combined with fur-lined parkas while embroidered jackets and patchworks of wools bring richness to the collection.”
— Delphine Ninous, vice president women’s design

“The mood of the collection is somewhere between Blitz Kids theatrics and late Seventies European aristocratic glamour, with a touch of Pierrot sadness. It’s about using clothes as a form of escapism and living for today — or rather, tonight.”
— Serafina Sama, designer, Isa Arfen

“A story and the expectations of ‘Love’s Young Dream.’”
— Mary Katrantzou

“I explored fragility and femininity and how femininity is exposed, and yet survives and shines through in the tougher side of urban environments.”
— Huishan Zhang

“I am inspired by Erwin Blumenfeld’s ‘Fantasies.’ The collection draws on his belief that the camera is a flexible medium that should be used with imagination and fantasy. It’s fanciful, it gives a new feeling to forms and figures and flips to a blunt and contemporary tone.”
— Emilia Wickstead