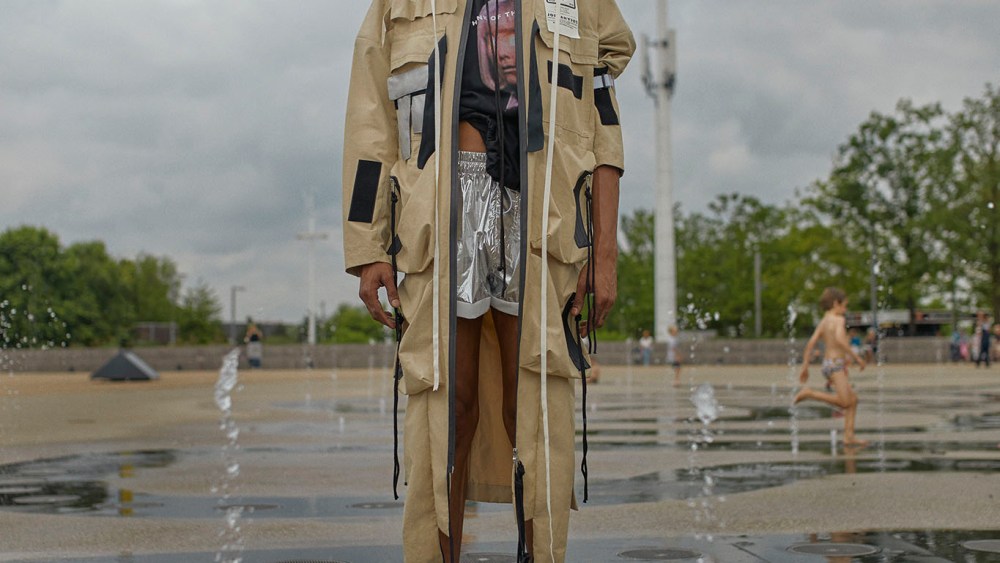 The label designed by Ka Wa Key Chow and Jarno Lappanen is in its fourth season, although this week marks the first time the designers have made it onto the London schedule. Chow is a Royal College of Art graduate, while Leppanen comes from an arts background. The inspiration behind the collection was “a story about a monk who imagines himself as a model in a work by the late photographer Ren Hang,” said Chow. Drawing directly from this reference and monk imagery, the collection was created from a swathe of bright-yet-earthy colors in a swathe of red, golden yellow and cobalt blue.

The duo said they have also been working on fabric manipulation and development this season. “We will continue using our signature technique, which is where we create a semi-transparent pattern on cotton blend and it makes it look like a painting,” Chow said. The process creates the appearance of dreamy, lightweight and floaty garments. A plastic-y PVC fabric will make its debut in the new collection. “We wanted to have a waterproof element to it and we used a combination of previous techniques to develop it,” said Leppanen.

Ka Wa Key is stocked in Opening Ceremony, Wut in Tokyo and at two stand-alone boutiques in China. Prices range from 90 pounds for a T-shirt to 1,000 pounds for specially treated garments such as coats and jackets. Their collection will be presented as a 15-minute performance piece in London Fashion Week Men’s Discover Lab on June 11.

Design duo Jordan Bowen and Luca Marchetto launched their eponymous brand JordanLuca last year. The two had been working in the industry for a few years before joining: Luca was design assistant to Vivienne Westwood and Jordan was making hats with British milliner Stephen Jones.

JordanLuca launched in September 2017 and business has been thriving: Harvey Nichols is among the 12 stockists that have picked up the brand. “We have a few years of experience, so we started with a very focused distribution strategy in terms of where, when and how we are going to distribute our products,” Bowen said.

This season, the growing movement of flat Earthers inspired the duo. “It’s not just isolated to America, it’s growing bigger and we felt that this was very relevant because ultimately it boils down to people not believing in our system, with something so fundamental as the Earth being a globe,” he said of their inspiration.

The collection will see a continuation of their best-selling pieces such as tracksuits made from crinkly aluminum Space-Age fabrics. Macramé, linen and denim will also be incorporated into the collection in an appropriately earthy palette of brown and camels. “Ultimately JordanLuca is Italian heritage meets London subculture, so we will still be looking at those two tropes and fusing them together,” Bowen said.

Their collection will start at 130 euros for basic items while heavier pieces will have an average price of 1,000 euros. JordanLuca will be showing their collection at London Fashion Week Men’s Discovery Lab on June 9.

A fashion week veteran, Wauchob has been showing on the official Paris Fashion Week calendar since 2003, but is a newcomer to the London men’s catwalk. This season marks another shift for the Irish designer, who will be staging her first coed show during the men’s season after moving her show to London four seasons ago. The schedule change was a simple decision, she said. “I like to show where I work and live, so when I decided to move the atelier to London I decided to show in the same place.”

Wauchob is best known for her overtly feminine aesthetic — for lace, frills and relaxed draping — and for incorporating masculine elements into her men’s wear collections. This coed show will see masculine and feminine elements come to light, and the designer said she’s also exploring tailoring in a new way.

What remains the same across both collections is Wauchob’s focus on the body. “Quite often, we look at the elongation of the body,” adding that this season she looked toward contemporary dancers, such as Martha Graham and Pina Bausch for inspiration.

Wauchob said she pared back her palette, and while there are still elements of color and print, the collection is much more monochromatic than previous seasons.

Prices range from 250 pounds to 1,800 pounds and her designs can be sold in Selfridges. The designer will be staging a show at 4 p.m. on June 9.

London native Bianca Saunders was among the designers chosen for the British Fashion Council’s NewGen Ones To Watch sponsorship after graduating from the Royal College of Art last year. She won the award on the back of her MA graduation collection, Personal Politics, which unpacked themes surrounding black masculinity. This season’s collection, Gestures, is a continuation of that topic.

She said she plans to focus on her exploration of body language: “I wanted to keep it relatable, so I stuck to the same fabrics. But in the last collection, the pieces would move, in this collection, everything stays still,” said Saunders, who has worked for Preen and Jonathan Saunders and collaborated with ShowStudio and Nowness on small film productions.

Through her collaborations, Saunders has managed to find a clear voice for the brand. For spring 2019, she has introduced pattern and print to her otherwise monochromatic pieces. “I’ve kept the beiges and the white, but I’m gradually going into color,” she said.

She said she is using color to explore a softer construction of masculinity without being obvious about it. She said blue is a new color for her this season. Her designs are stocked at London concept store Machine-A and Tokyo’s L’Échoppe. Prices range from 90 pounds to 400 pounds. Her collection will be presented at London Fashion Week Men’s Discovery Lab on June 9.