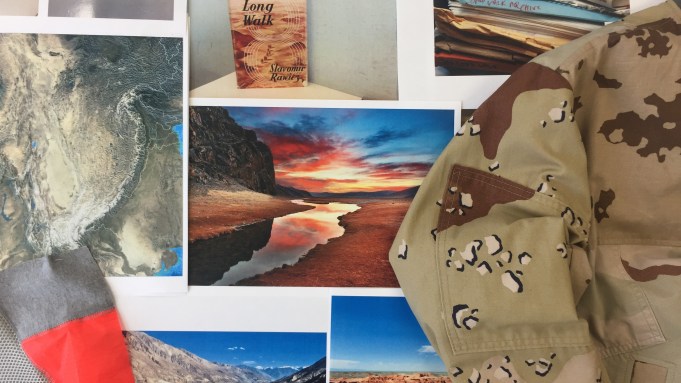 From wartime photographers to so-called “market fashion,” London men’s wear designers looked to a wide range of subjects for inspiration for their spring 2018 collections. Here, some of the topics that sparked their creativity ahead of the shows, which begin today.

“Exploring the placement and significance of width as a signifier of power and gender.” Edward Crutchley

“For spring 2018, I was inspired by sailors, nautica and Jacques Tati. Using these references we created a collection of workwear-inspired pieces with a more contemporary fit and high-quality materials.” Angelo Van Mol, Band of Outsiders

“If you want something from my collection, just choose one thing, style it with your other clothes: buy less, choose well, make it last.” Vivienne Westwood

“Topman Design experiments with shape, print and tailoring and plays with the idea of modern masculinity in London, whilst referencing one of the city’s most iconic scenes.” Gordon Richardson, Topman creative director

“For spring 2018, Nigel Cabourn, who is celebrating 50 years in design, will unveil a third Authentic limited-edition collection entitled ‘Whatever Happened to Sean Flynn,’ drawing upon the life and times of the celebrated war photojournalist and son of Hollywood legend, Errol Flynn, as his inspiration. Working closely with Sean Flynn’s best friend and fellow photographer Tim Page, Nigel has been able to use previously unseen photographs of Flynn and Page, taken during the Vietnam War, to create a collection of men’s, women’s and unisex styles. Nigel has also worked closely with international fabric designer Riccardo Bruni to produce special fabrics for this collection, which is all made in England.” — Nigel Cabourn

“The spring 2018 collection has been inspired by the photographs of Andrew Curtis, one half of design group International Lawns. Andrew and partner Niall Monro were fascinated with the idea of the seasonal repainting of garage door surfaces, an artistic decorative expression in a contemporary suburban context. Only a short leap took them to the well-kept lawn. Both Monro and Curtis live in the suburbs, a place where the subtle aesthetics of lawn care or garage door painting can flourish. The idea of personal aesthetic choice through the lawn or a garage door appealed to me deeply. Their sun-bleached primary colors of also felt a lot like my own memories of Britain in the summertime.” — Patrick Grant, designer, E. Tautz

“The new collection is entitled Login and is an abstract look at our immediate future and the way we are currently treating and subsequently destroying our planet. With the rise of technology, it will not be long before we’re forced to disappear online to experience nature’s beauty as well as human intoxication.” — Nicholas Biela and James Waller, designers, Blood Brother

“Spring 2018 is all about going back to the basis of what my brand is about. It has been two years since I graduated from Central Saint Martins and this collection focuses on cementing the DNA of Daniel W. Fletcher. It draws references from my long-term sources of inspiration found in British heritage and Seventies sportswear and at the same time continues to reflect on modern youth culture. Expect to see some more stripes, wrestling suits and Speedos.” — Daniel W. Fletcher

“Alex Mullins’ spring 2018 is an experimental visual of a fragrance that doesn’t exist, embodying the feeling of nostalgia between the image and aroma.”  — Alex Mullins

“The new collection draws inspiration from Slavomir Rawicz’s epic 4,000 mile story of adventure and survival — tracing a 4,000-mile journey from Siberia to India traversing the deserts of the Gobi and the rocky extremes of the Himalayas.” — Christopher Raeburn

“The new collection’s inspiration derives from 1995, when I was 12 and the fashion rage was ‘market fashion.’ It was all about the fashion my friends and I shamelessly bought to imitate each other for social acceptance and good old banter. We would take pride in our fake Gucci or as it was called back then ‘Gabucci’ and saw it as both rebellion and pride in being too good for the real thing at age 12. I wanted to make this collection fun and use old school streetwear design techniques that ironically imitate luxury brands. It’s been fun, refreshing and nostalgic.” — Katie Eary

“We explored the bridge between the coming of age of a school leaver who is entering the working world.” — Samuel Ross, designer, A-Cold-Wall

“Yearning for simpler times in response to today’s bombardment of information and technology, spring 2018 looks into the past to reimagine a new future. Blending craftsmanship with new technologies, the movements of the nomadic Bedouin tribes of the Middle East are explored and juxtaposed with modern military parachute fabrications and stitching techniques.” — Khalid Al Qasimi, designer, Qasimi

“D.Gnak stands at the intersection of two worlds: the underground and the mainstream and where East meets West.” — Kang Dong Jun, designer, D. Gnak

‘This season felt a little different for me — instead of drawing on an artwork or an artist, I couldn’t stop myself from looking at images of child soldiers. I had piles and piles of photos of children in Sierra Leone, Uganda, Liberia and Nigeria, dressed in Army fatigues, ready to fight in wars that they couldn’t possibly understand. I began thinking about how their clothes, and in particular their oversize fit, gave them this flawed confidence. A ruthlessness that signifies both power and weakness.” — Raimund Berthold, designer, Berthold