Where to eat, shop, sleep and preen in London during Fashion Week. 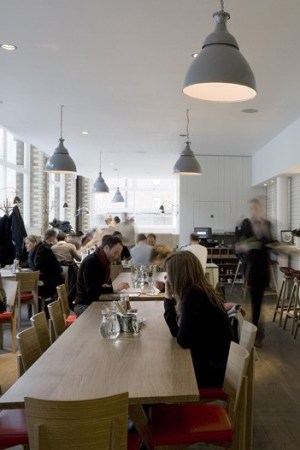 CONRANS’ CAFE: Albion is a very old name for Great Britain, and it’s also the moniker Terence and Vicki Conran have given their new East London cafe. Albion is part of Boundary, a soon-to-open clutch of bars, eateries — and 17 guest bedrooms — housed in a converted Victorian warehouse in Shoreditch. Albion’s interior is stark and Scandinavian-inspired, with white-tiled walls, long communal wooden tables and an open kitchen with quirky, homely touches like hand-knitted tea cozies. The food is hearty British fare, including fish and chips, shepherd’s pie and blackberry crumble. It’s open from 8 a.m. until midnight daily.

This story first appeared in the February 16, 2009 issue of WWD. Subscribe Today.

CLOSET MADONNA: As Madonna continues to travel the world with the Sticky and Sweet tour, her wardrobe will be taking a bow of its own — in London’s East End. “Simply Madonna,” curated by Ted Owen in association with Marquee Capital, an investment firm specializing in celebrity memorabilia, opens at the Truman Brewery on Feb. 20. It showcases costumes from stage, film and music videos. Highlights include the bright pink “Material Girl” strapless dress; wedding gowns from the Like a Virgin tour and “Evita,” and the bustier with black and gold tassels from the “Open Your Heart” video. “Simply Madonna”

ROOMS WITH A VIEW: One of the most sought-after invitations this season is to the Paramount private members club, perched 32 stories above London’s West End. Housed on the top three floors of Richard Seifert’s iconic Centre Point building, the club offers a restaurant, bar, viewing gallery and private event space designed by Mark Way and Tom Dixon. The copper, slate and sea green interior features design elements that reference the modernist architecture of the building, such as bar stools designed by Norman Cherner. A large copper bar that recalls the edge of a cut gemstone is the focal point of the dining room. In the restaurant, head chef James O’Connor’s traditional British menu includes roast loin of pork with applesauce and “bubble-and-squeak” — that’s shallow fried vegetables — and braised ox cheeks with baby onions, mushrooms and pancetta.

ANGEL DELIGHT: My Sugarland, the fashion and lifestyle boutique that opened in London’s Angel neighborhood last fall, is Zoe Lem’s playground. Designs by London-based labels such as SteveJ and YoniP, Belle Sauvage and Evie Belle sit alongside vintage accessories and furniture sourced by Lem, who is a former fashion stylist. In the vintage area of the 2,500-square-foot space, secondhand clothes and accessories hang against a scarlet wall while sumptuous antique furniture and birdcages and Lionel Dean hats sit on white podiums in a more futuristic area at the back.

BEAUTY SPOT: Since retro makeup is now oh-so-modern, hipsters are bound to flip for The Powder Room, a Fifties-inspired beauty store and salon recently opened in East London. The bijou boutique, which boasts Americana touches, offers makeup application, hairstyling, manicures and products by Bumble and bumble, Paul and Joe and Mavala. Those not tempted to try a radical makeover might just be tempted by the tea and cakes served. A 15-minute manicure or a speedy hairstyling session are priced at approximately 15 pounds, or about $21.