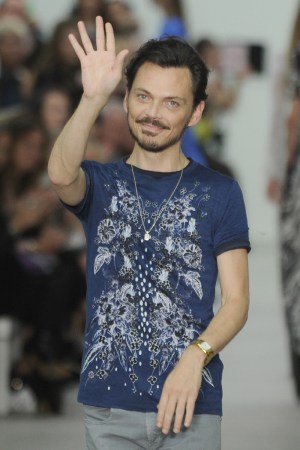 LONDON — The momentum at London Fashion Week, which has been building a roster of marquee names, shows no signs of flagging, with big luxury groups backing young designers and even London-based investors like Sir Philip Green eager to build brands and help local talent flourish.

This story first appeared in the February 14, 2014 issue of WWD. Subscribe Today.

But the question remains — as always with London: How long can the golden age last?

London has been living through an extended moment of glory thanks to the pull of the calendar’s names — from Christopher Kane and J.W. Anderson to Burberry and Tom Ford — and behind-the-scenes efforts from the British Fashion Council. But London has seen glory days before — in the Eighties with John Galliano, Rifat Ozbek, Bodymap and Katharine Hamnett, and during Nineties Cool Britannia, with Alexander McQueen, Hussein Chalayan, Philip Treacy and Antonio Berardi.

During both decades, the excitement eventually waned, cash-strapped businesses faltered, and a talented, lucky few left to work or show abroad. (Stella McCartney, whose starry graduate show at Central Saint Martins took place in 1995, was quickly poached by French fashion house Chloé, and never showed on the London runways.) Designers of course remained, but London on the whole shrank back to a tiny dot on the fashion map: interesting creatively but commercially insignificant. The question remains whether the boom-and-bust cycle will continue, or whether London as a fashion city can build upon the gravitas of rivals New York, Milan and Paris.

“If London’s living a moment, it’s certainly a long one,” said Matthew Williamson, who launched his label in 1997, showed for a spell in New York and returned to show in his home city in 2007. “London isn’t just about being a ‘show city.’ Designers are savvy nowadays and they want to build long-term businesses. And in my 17 years, I have never known such a group of independent and intelligent individuals [to] come together to support and harness business growth. The BFC has created a fantastic structure and recognized that fashion is a business to be reckoned with. We are miles apart — worlds away — from the landscape in which I launched my business.”

Consultant Robert Burke said the success of the London’s men’s wear showcase, which launched in June 2012, has been significant to the city overall. “Interest in tailored clothing is at an all-time high, and London has the opportunity to capitalize on that. We’re encouraged by what we are seeing on the men’s wear front — New York has never been able to pull off a men’s fashion week — and I do think that the men’s and women’s weeks support each other,” he said.

Maria Lemos, founder of one of London’s top fashion showrooms, Rainbowwave, said the past is a different planet. Lemos, who worked as a commercial director for John Galliano in the late Eighties, said: “London was very cool then. John had just won Designer of the Year at the British Fashion Awards, but he didn’t know anything about the business. When his backer pulled out, the patterns were thrown in the street. John was in the street! The studio closed in a month, and John went to Paris, where his new backers were. Today, the BFC would never let something like that happen, and designers are trained at an early stage to look at the numbers.”

Today, during the breakfast briefing to kick off London Fashion Week, the BFC will unveil the creation of a one-day, invitation-only, Davos-style Fashion Forum in London that will take place on June 24. The aim is to form a “global industry think tank” with growth and investment as the key topic and with entrepreneurs, politicians, chief executive officers and British fashion designers taking part. Later this year, the BFC also plans to publish a guide to investment on its Web site, part of its strategic growth platform for London. Both the event and the guide are part of a multipronged strategy to corral designers when they’re young and support them through the long process of building a business. Meanwhile, in September, the BFC plans to reveal its first B.A. scholarship program.

One of the many BFC programs, the invitation-only Fashion Trust, is a group of entrepreneurs who offer their time — and money — to help growing designer businesses. Designers who have benefitted from the fund include Roksanda Ilincic, Mary Katrantzou, Lucas Nascimento and Nicholas Kirkwood. “The aim is to help them become global brands,” said Felicia Brocklebank, a founding member of the fund, former investment banker and co-owner of children’s shoe brand Papouelli.

Brocklebank said members — who include Megha Mittal, Tania Fares, Kim Hersov and Leon Max — link designers with such people as trademark lawyers and brand advisers, and offer guidance about finding the right investors. The trust also has a U.S. branch, headed by Jessica de Rothschild, with members including Amanda Ross, Samantha Boardman and Amy Guttman, and one in Hong Kong, as well.

Investors, too, are seeing London’s fashion labels in an all-new light. “London brands have always been attractive; maybe the world is just taking better notice now because the British Fashion Council has helped them gain visibility, and because the French and Italians have ruled for so long,” said Fabrizio Zappaterra, an executive at Searchlight Capital Partners, which owns and is relaunching Hunter. Zappaterra is also a personal investor in and chairman of Temperley London. “In the past, the U.K. hasn’t been good at nurturing its talent like Italy and France have. The labels themselves are really interesting, there’s great creative content; what’s missing is the strategic, commercial and branding elements. Of course, the craft has to be there, and the product has to be unique and appeal to a bigger market. Then the key is putting capital together with the right management team,” he said.

Zappaterra said London is particularly interesting right now because, unlike 10 years ago, there are more markets in which to sell. “A decade ago you sold to the U.S., Europe and Japan. Today, there’s Brazil, the Middle East, Russia and China,” to name a few, he said, adding that tourism to the U.K. has also helped boost London designers’ visibility.

Sagra Maceira de Rosen, the ceo of Amanda Wakeley, which received a capital injection from private equity firm AGC Equity Partners in 2012, said London designers are attracting investment for other reasons, too. “The business of fashion is much better understood today, the whole industry has come of age, and there have been some amazing success stories over the past 10 to 15 years: Jimmy Choo, DVF, Michael Kors, Moncler. All of those brands are new ones, and I think their success has whetted the appetite of designers and investors alike,” she said.

Maceira de Rosen, a former top-ranked equities analyst at J.P. Morgan and coauthor of “The Towering World of Jimmy Choo,” said she’s putting her efforts behind Wakeley for a variety of reasons. “I think having a London heritage is an asset for any brand, and I can see Amanda as a Carolina Herrera of the U.K. For me, she represents a cosmopolitan London lifestyle that is globally attractive,” Maceira de Rosen said.

What of the British investors? Retailers Marks & Spencer, River Island, and New Look have all, at some point, taken part in London Fashion Week initiatives or worked with designers on collaborations. Topshop has been a longtime sponsor of the BFC’s NewGen scheme, which gives emerging designers funds and mentoring to build their businesses and stage runway shows. As yet, however, no big group has put its money behind a designer, in the style of LVMH or Kering.

That said, Topshop’s billionaire owner Green said he is game. “We have been the incubator for a lot of these designers, and the bottom line is always ‘How do we turn them into a brand?’ I’ve had conversations with designers for years, but they haven’t come to fruition. I would love to create a great new British brand. If somebody comes to me with the right business plan, I’ll say: ‘Let’s get on with it!’ There is no reticence on our side.”

And as more investors circle — Roksanda Ilincic and Orlebar Brown are among the names that have recently secured private investment — the designers themselves are endeavoring to make their brands as commercial as possible, without compromising their design aesthetic. Simone Rocha has just inked a deal to create two collections for J Brand, while Peter Pilotto, winner of the 200,000 pounds, or $330,000, BFC/Vogue Fashion Fund prize, recently unveiled a collection for Target.

Lemos of Rainbowwave said the British designers have been strategizing on a variety of fronts in a bid to build viable businesses. “They have worked on prices a lot: Jonathan Saunders, J.W. Anderson and Peter Pilotto have a really good pricing structure that makes them competitive in the international market,” she said adding that many use Stella McCartney’s pricing as a point of reference and try not to surpass that. (McCartney clearly has a winning formula: Her rtw sales are among the highest at Kering, according to sources.)

While the future may look rosy, there is the risk that London becomes the victim of its own success once again, with designers quitting town in order for New York, Milan or Paris to be closer to their foreign backers or manufacturers, or to expose themselves to different markets. Caroline Rush, ceo of the BFC, said she does not see this as a problem this time round.

“I think we could argue now that the audience in London is as strong as most capitals. The key decision-makers come,” she said. “Having said that, [sometimes designers decide it] makes much more sense to show in other markets, as you know Victoria Beckham shows in New York. Having that creativity in other capitals isn’t always a bad thing because it allows you to shout about how great British fashion is in other capitals.”

British footwear designer Kirkwood, who shows and sells in Paris, is a case in point: LVMH took a majority stake in his business in September, but Kirkwood told WWD he’s now looking to set up a permanent showroom and sales space in London to mark the 10th anniversary of his business later this year. He said LVMH has put no pressure on him to remain in Paris. “They invested in the company because they believe in what we are doing, and they support our vision,” he said.

Hunter Original, which is debuting its new brand image and collection with a runway show on Saturday, has made an ongoing commitment to London Fashion Week. The brand will also be taking wholesale orders at its showroom in London. “Hunter is a British brand, and it’s the start of a brave new dawn,” said Alasdhair Willis, Hunter’s creative director. “There’s an energy attached to London that really befits a brand like Hunter, and we’re proud to be associated with the city.”