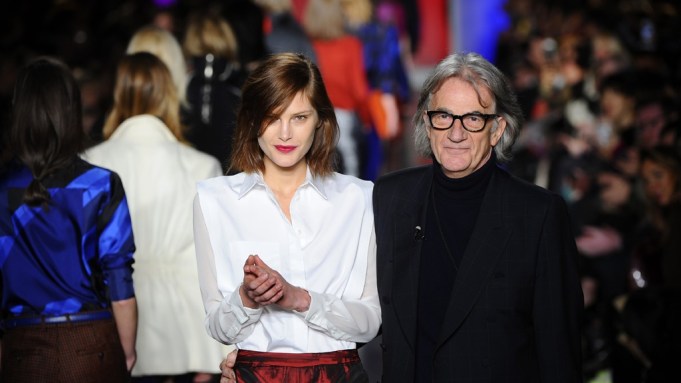 “Are you going to London?”

That question used to be direct from the stock arsenal of fashion small talk, typically bandied about somewhere around the second Wednesday of New York Fashion Week, when you’ve been sitting next to the same people every hour on the hour for six days and counting and have simply run out of things to say.

For a while, those who answered in the affirmative were either stalwart retailers, junior-ish editors who didn’t make the cut for Milan or Paris, or party people. But in the past year or so, things have changed dramatically. Suddenly everyone is going. London has induced a major case of fashion FOMO (for Luddites, that’s “fear of missing out”), and not just because Burberry’s been anchoring the shows there. In the words of Bergdorf Goodman’s Linda Fargo, London is now a “do-not-miss opportunity.”

If industry veterans prone to cynicism have been inclined to dismiss this renewed love for London as just another chapter in the city’s cyclical history of fashion ups and downs, they might have to rethink their point of view. Tradition has it that the London kids go crazy with creativity and then the money men headhunt them away to Paris, where real businesses are built. Alexander McQueen, John Galliano and Stella McCartney are all famous examples of this. When Christopher Kane, one of the U.K.’s current great big hopes, announced that Kering (formerly known as PPR) had taken a majority stake in his label in January, it looked like he might go that way, too. But if the seats in London are already filled with the right people, why would he take his show on the road?

“That’s what really has changed,” says Peter Pilotto, one of Kane’s peers and a steady draw on the local schedule. “When we started, that was so in the air, to guess who would leave London first. But it doesn’t come up anymore. Nowadays, everybody wants to stay and make sure the week is good because the more strong people who show during London Fashion Week, the better it is for all of us.”

London isn’t just retaining its talent; it’s attracting more from all angles of the industry.

“I would say overall to summarize fashion week, the word is ‘up,’” says Natalie Massenet, the newly installed chairman of the British Fashion Council. “We’re up on attendance, up on coverage and business generated, and we’re up on number of designers that are showing.”

Two new names on the London fall schedule were L’Wren Scott and Tom Ford. Neither are start-ups, but both are based in London and brought to the show schedule an elevated sense of sexiness and established star power. Scott, who has usually shown in New York, staged her swanky, United Nations–style synchronized service lunch presentation followed by a splashy dinner at Café Royal hosted by her boyfriend, Mick Jagger. When Scott stood to thank her guests for coming to the dinner, she ended her speech with, “I love London. And Natalie, we are so happy you’re here.”

Ford, meanwhile, had the privilege and pressure of being the week’s de facto headliner, making his public comeback to the runway after several seasons of playing Greta Garbo. The man knows how to make a scene, which he did with his grand presentation at the historic Lancaster House and his collection that could be described as jaw-dropping, for better or for worse.

Then there’s Massenet, herself a marquee name for LFW. The retail/e-commerce rock star from Net-a-porter means business at the BFC. Since taking over from Harold Tillman in January, she’s made quick work of her influence, recruiting Burberry back to London for the men’s shows in June and bringing in record numbers for February’s women’s collections. On top of the 40 percent increase in retailer attendance last September—London’s largest bump to date—the February shows were up 15 percent. Buyers from 29 countries attended the fall collections, as did editors from 43—20 percent more than last season. Joshua Schulman from Bergdorf Goodman was a first-timer, likewise Daniella Vitale and Mark Lee from Barneys. Joseph Boitano from Saks said he added two additional staff to Saks’ presence in London. Cathy Horyn was there, along with full squads from The Wall Street Journal and T: The New York Times Style Magazine. There were almost too many American Vogue editors to count.

But aside from the Fords and Burberrys of the world, what about the actual fashion? Yes, everyone wants to be the one to discover the next Alexander McQueen, earning a lifetime of bragging rights over those who couldn’t make time for London. But to expect that level of work is unrealistic. From a critical standpoint, the London shows are solid, with more in common with New York than Milan or Paris. And it’s not just because American turf has always been more welcoming to rookies than its elitist European counterparts. There’s the branding—the sponsorship logos by American Express, Vodafone, DHL and Topshop plastered all over Somerset House are similar to what can be found at Lincoln Center, but not as commercialized yet. Like their brethren protecting the Tents in New York, the BFC security detail seems gruff in comparison with Paris’ pretty and polite cravates rouges.

The London runways have the range if not the breadth displayed in New York, but they lack the sophistication and production value of the big players in Milan and Paris. Look at it this way: Ralph Lauren is to Burberry as Alexander Wang is to Christopher Kane and Nicole Miller is to Issa. New York has its Rodarte and Creatures of the Wind to drive curiosity and newness, while London has Katrantzou, Anderson and Rocha. There is still a raw quality to those collections, whether in production level or the designers’ fabric choices, which often had a funky, synthetic look. In some cases that was deliberate, such as at Rocha, where she used plastic and fuzzy fake fur. Other times it made one appreciate the craftsmanship found in Milan, which has been labeled by some the land of the boring, bourgeois and beige in comparison to the verve of London. Say what you will—the Italian collections are always impeccably made.

Yet the London designers are gaining ground by carrying the torch for the city’s offbeat reputation, delivering buzzy newness while intersecting with legitimate business, which was always the U.K.’s problem. Paul Smith, the city’s fashion patriarch, who has quietly built a $600 million business while keeping his women’s show local to London (his men’s collection, the driving force of the label, has and continues to show in Paris), has seen his city go through it all.

“When I first started in the industry, it was always quite popular with visitors from America or France or Italy, because it was always such a gold mine of ideas,” Smith says. “Unfortunately, we were quite bad at making things beautifully and delivering them on time and actually running a business.”

That changed with the mind-set of the current crop of designers working there, who realize that you can’t keep going on ideas alone. Smith credits the involvement of the BFC and the support of government agencies, which realize the fashion industry’s job creation and tourism potential.

Vitale and her team at Barneys, which has always prided itself on support of new designers, have bought into Erdem, Katrantzou and Kane for years. This was the first time she actually made the trip, arriving on Sunday morning and leaving for Milan on Wednesday, to see the collections from “start to finish” instead of just buying from the showroom, and she was impressed with the LFW production. “It was really well done,” says Vitale. “I give Natalie a lot of credit. It was really well organized. The energy is fantastic. The schedule allowed for time to get to different places and spend time and linger in showrooms and see new things.”

Alexander Lewis was a new designer Barneys picked up for the first time. That said, Vitale adds, “We saw new things, we found new things, but London didn’t supersede anything else.”

For that to happen, the city needs to further pad its roster with established talent, which is on Massenet’s immediate agenda. She didn’t get specific on whom she would like to recruit but one imagines that Stella McCartney and Alexander McQueen, both of which are based in London, are on the wish list.

“I don’t think it’s a question of not wanting to show in London, it’s just a question of how those brands are currently marketing or positioning themselves,” says Massenet. “When I talk to all of the [labels] that are based here, they are very proud of being British fashion brands. A lot of them are global and trading globally, and they see where they show as not necessarily a stamp of approval of the British fashion industry, but just more a business decision. Having said that, I think what we’re currently offering is very attractive to brands so they don’t actually have to move.”

If Massenet and the BFC could pull that off, it would be remarkable. Don’t put it past them. One of the most impressive things about London Fashion Week was that the shows started basically on time—arrive 10 minutes late and you’ve missed it. That’s the fashion week equivalent of moving mountains.