By Samantha Conti and Nina Jones on February 22, 2012
View Slideshow 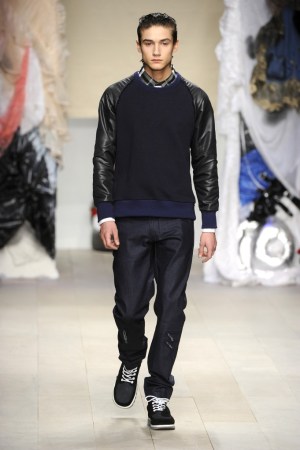 It was Serra’s show at the Metropolitan Museum of Art last summer that got Patrick Grant, designer of E. Tautz, thinking about density, weight — and darkness. “Now when I think about clothes,” he said, “mass is of the utmost importance.”

British soldiers on parade in the rain were another inspiration for this sober, elegant collection that featured cavalry twills, melton wools, tweed, houndstooth and oversize and micro-check weaves.

Grant kept his silhouettes lean — with a “Mad Men”-ish feel — layering a handwoven tweed two-button jacket over a V-neck sweater and charcoal cashmere trousers, and sending out long fly-front overcoats, some with a bright red lining.

He worked oversize checks onto anoraks, parkas and overcoats with rounded shoulders and wide sleeves, and wove those same checks onto his graphic red and black knitwear.

James Long, meanwhile, was dreaming about the surreal images of Lynch and Burtynsky, which made for a collection full of color and sparkle. Knitwear — which came in the form of chunky cable crewnecks or delicate cardigans — was shot through with sparkling metallic yarn, while shirts were dotted with gold sequins.

Quilted velvet leather jackets also got the Midas touch in the form of gold embellishments and embroidery from the military specialists Hawthorne & Heaney in London. For the more understated man, there were refined, knee-length cardigans: The one in burnt orange, dark red and forest green was a standout.

Barry Tulip, the house’s design director, styled his wool, royal blue suits with ties and pocket squares in bold red and green geometric prints that recalled Hicks’ designs. But pieces such as a camel wool coat and a navy gabardine cotton peacoat brought some very British restraint to the printed accessories.

Lou Dalton also looked to the past, inspired by the idea of a wartime love story. She sent out slim navy wool suits accessorized with peaked soldiers’ caps, a russet-colored tweed motorcycle jacket and rugged wool sweaters.

While Topman may not have been a particularly arty or nostalgic collection, it was the most elegant show the brand has staged, filled with snazzy double-breasted suits, textured wool coats — some of which came with fur collars — and short ponyskin motorcycle jackets. It was smart and tough and commercial — and will have international appeal.

By contrast, London’s younger, emerging labels took a more casual, sportswear-inspired route this season. For the JW Anderson label that meant a quirky take on ski suits. Designer Jonathan Anderson sent out padded tank tops and matching trousers with zippers at the ankles, paired with snug knit polo necks. Other highlights included quilted leather motorcycle jackets and full-length coats, and the designer’s signature knitwear. He created intarsia windowpane checks for one sweater and a chunky cable-knit embellished with braided ribbons for another.

At Man, the biannual showcase for three young designers, Shaun Samson offered a tough take on sportswear, citing “urban street tribes” as his inspiration. Models stomped out clad in sweatpants or oversize boardshorts and mesh T-shirts.

Astrid Andersen, a newcomer to Man, also infused her sportswear with a hip-hop aesthetic, and named the rap collective Wu-Tang Clan as her touchstone. That translated into some flamboyantly macho designs, such as down jackets in prints that resembled gray marble, their hoods lined with fur. She paired them with tracksuit pants emblazoned with her last name.

Christopher Shannon has forged a reputation for sports-influenced streetwear, and he stayed true to that aesthetic. Taking inspiration from “La Haine,” the 1995 film about Paris’ tough suburbs, the designer sent out pieces such as zip-up nylon jackets in black-and-white gingham, and utilitarian bomber jackets with zips around the arms.