The city’s second edition of London Collections: Men sparked some controversy, due to its timing, but also created fans. 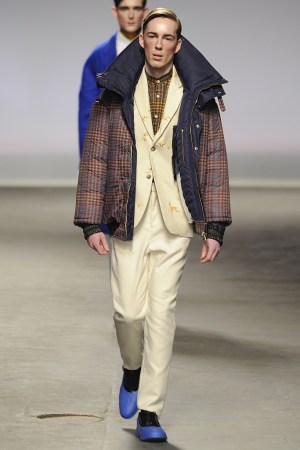 LONDON — It’s rare that a G-8 leader happily takes to the microphone to talk about fashion — including the Marks & Spencer underpants he’s wearing — but earlier this week, Britain’s Prime Minister David Cameron did just that — and no one took the gesture more seriously than the British Fashion Council.

“Fashion is not just some sort of accessory, you’re not an add-on,” he told industry figures including Tom Ford, Tommy Hilfiger, Richard James, Jonathan Saunders and Patrick Grant during a reception at Number 10 Downing Street. An ultraenthusiastic Cameron told his audience that he wants to see more high-end goods manufactured in Britain as part of an overall strategy to “reindustrialize” the country. “You have my 100 percent support, so just go for it.”

The BFC, which staged its second, three-day showcase of men’s fashions this week, has been pushing hard for London’s designers to stand shoulder-to-shoulder with their counterparts in Milan and Paris. Cameron’s pep talk — entirely his idea — left much of Monday night’s crowd abuzz. “There could not have been a better start to the New Year,” said Natalie Massenet, the new chairwoman of the British Fashion Council. “There is enormous potential here, and the stage is set.”

But there are also many challenges: Some buyers and members of the press were forced to cut short their trips to London to attend Pitti Uomo in Florence, which began Tuesday, the second day of London Collections: Men. The timing also forced some to terminate their post-Christmas holidays earlier than usual, with designers and their teams rushing during the holiday season to get samples made and shows organized.

“I mentor young designers, and I was nervous about the shows taking place so soon after Christmas, and that they wouldn’t be ready,” said Stephen Ayres, head of fashion at Liberty. “But they were ready, and the deadline gave them the confidence to cope under pressure.”

Ayres said he believes London is making a name as the city that supports emerging men’s talent. “If Milan is about the superbrands and Paris is about the avant-garde, it’s London that’s supporting young designers, and the shows are imperative to their future,” he said.

Still, Richard Cohen, vice president of business development at Saks Fifth Avenue, said it will take time for London to make a name as a men’s wear capital. “This season was a good start, and there is no question that London is — and could be — something,” said Cohen, who left for Pitti halfway through the London shows.

“It will take time — two or three seasons at least. It’s not something you do in five minutes. And I was disappointed not to see more buyers,” added Cohen. “I’d like to see more American buyers in London. The organization of the shows was well done, and there’s lots of creativity and energy in the city.”

The American stores attending, in addition to Saks Fifth Avenue, were Bloomingdale’s and Opening Ceremony. Nearly 70 stores from outside the U.K. attended London Collections: Men from markets including China, Italy, France, Japan and South Korea.

Ford, who with Alexander McQueen was one of the two biggest names on this season’s calendar, said his decision to show men’s wear in London — he’s also showing his women’s wear with a runway event next month — was a natural one.

“I’ve had a house here since 1997, my design studio is here, and I love it. In many ways it’s my home, and my taste in men’s wear has always been a mix of Anglophile with the lightness of the Italian hand. And English men’s wear is at the root of contemporary men’s wear, so it makes sense. We’re committed to London for the near term, and as long as we can attract the press we need, we’ll stay here. Ultimately, that will be the test,” he said.

The shows themselves were professional, polished affairs. Among the major trends to emerge were explosive colors; the reinvention of traditional suits with patchwork and paneling; a play on proportions for outerwear and suits, and lots of statement knits, many of which were worn layered under suits, in place of shirts.

The Alexander McQueen show — an homage to Savile Row with lots of dramatic flourishes — embodied many of the ideas that were floating in the London air. The brand’s creative director, Sarah Burton, took the dark pinstripe suit — with its nipped waist and signature McQueen raised shoulder — and tore it to bits. She reformed the fabric into a patchwork that resembled white pick-up sticks scattered across a black canvas.

The show also featured an impressive lineup of evening jackets crafted from an elegant patchwork of velvet, satin, grosgrain and jacquards, some with flourishes of gold embroidery. Other suits were made from artful patchworks of Prince of Wales and other checked fabrics, while long, sweeping coats were fashioned from rectangular panels of black and red wool resembling cardinals’ cassocks.

Lou Dalton, Richard Nicoll and Oliver Spencer also toyed with suit fabrics, cutting, splicing and reforming traditional shapes. Dalton fashioned her suits from stiff, thick fabrics and layered contrasting dark panels onto pocket flaps, around waists, and on the flanks and sleeves of boxy blazers. Nicoll favored slim, two-tone suits in a collection that he described as “preppy, sporty and clean,” while Spencer’s suits bore thick, contrasting stripes from shoulder-to-toe.

Color — the more intense and nature-inspired the better — was another major story, with Hilfiger’s new tailored clothing collection a rainbow of turquoise, forest green and aubergine, while Richard James — long known for a deft touch with bold shades in everything from suits to knits and shirts — used a rich, berry red inspired by bandstand players’ uniforms. He closed his show with a trio of shimmery tuxedos in grape, emerald green and midnight blue, worn with matching crystallized velvet slippers.

Knitwear played a starring role in many collections, not the least of which was at Tom Ford, which showed off luscious cashmere Fair Isle sweaters in lighthearted pastels such as lilac. “I hadn’t designed a Fair Isle sweater since the Eighties. But I think it looks really good again,” said Ford during a presentation at his showroom. He paired his Fair Isle knits with checked trousers, loafers and suede coats for a sporty, Sixties Saint Moritz look. But Ford didn’t limit himself to patterns. He also layered solid-colored roll-neck sweaters under checked three-piece suits — in tune with the collection’s collegiate, Anglo-American vibe.

Christopher Kane took his knits in a completely different direction: His cardigans were fashioned from fuzzy chenille yarns, while others had a spongy feel that came from 3-D patterns that resembled a leopard print in relief. At Hackett London, Jeremy Hackett mixed and layered tailored pieces with patterned knitwear in the form of sweater vests, V-neck pullovers and scarves. Nicole Farhi’s new creative director, Joanna Sykes, offered up beautifully executed knits in rich textures — waffle, rib, cable and intarsia. Jonathan Saunders’ three-tone textured knits gave depth to his sophisticated collection, while his inventive, camouflage-printed knits complemented the collection’s angles and graphic shapes.

London designers also played with proportions, pumping up outerwear in the spirit of the Michelin Man, and sending out roomy suits that looked as if they were borrowed from a father or older brother. At Topman, there were chunky, oversize parkas with fur-trimmed hoods, while Agi & Sam, a label that took part in the Man collective show, sent out puffy plaid jackets with big statement collars — not unlike the one on Count Dracula’s cape.

Margaret Howell played a more subtle game of proportions. Her collection was packed with slightly oversize looks inspired by workwear — the sort of clothes a young man might borrow from his dockworker father’s closet. There were wool car coats in sober shades of navy, gray, or army green, often worn with ribbed and nubby knits or striped sweaters. For more formal outings, Howell favored tone-on-tone, softly constructed suits and roomy jackets with patch pockets.