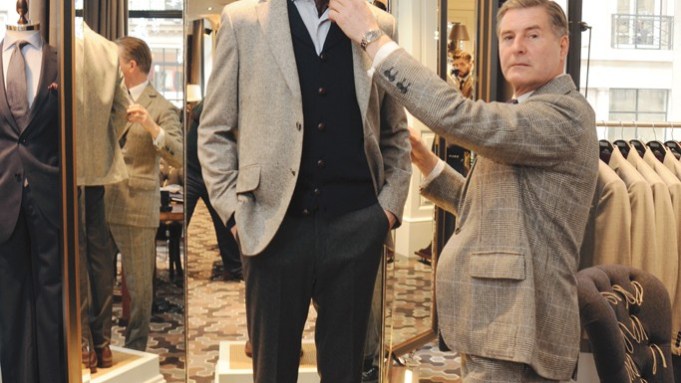 From Teddy Boys to the splendor of the Georgians, inspirations come in many forms.

HACKETT LONDON: “The headline is winter travel: We wanted to put together something that was tweedy and wintery — but not country. So it’s got a bit more of a refined urban feel. The tweeds are much finer, the colors are more blues, grays, with a little bit of brown and a little bit of camel. There are lots of raincoats and heavy outerwear. It’s a bit more rugged and outdoorsy, which I think is nice, and the tailoring is very refined.”

RAIMUND BERTHOL: “On the AW14 board…there are a lot of images that show disruption, but in a crude, almost craft way. Two young boys with spray-painted tattoos, a weathered passport photograph that is cracked and has aged over time, black gaffer tape that has been arranged onto a wall in a way that is almost hieroglyphic. In terms of shapes, I was looking a lot to outerwear and army trenchcoats. I was interested in how the smallest bit of elastic added to the cuff of a sleeve or to the nape of the neck can change a garment’s shape. I am interested in making what people think are very ‘functional’ clothes in unexpected fabrics.”

E. TAUTZ: “We’ve been poking our noses into the murky, bawdy and opulent world of post-Restoration London, the world of [Samuel] Pepys, the splendor of the Georgians, Hogarth and his mocking eye and the great finery of the beau monde.”

MATTHEW MILLER: “The politics of me. Rebel. Send to slaughter. The Black Flag. Texture.”

KIT NEALE: “This season we pay homage to the iconic Elephant and Castle, a run-down area of South London that is about to be regenerated. We wave the shopping center a fond farewell and capture what the area means to us.”

PRINGLE OF SCOTLAND: “I always like a game of opposites. There’s a napa leather biker jacket with knitted panels and a ‘shadow ribbing’ at the bottom where the leather has been bonded to knitwear.”

RAKE: “My inspiration for the season is loosely based around the film ‘The Downhill Racer’ with Robert Redford. That après-ski element [comes from] when the Cresta Run [in Saint Moritz] and bobsled were glamorous…and that very much is the feeling and the mood. It’s echoed throughout the collection in regard to knitwear and very heavily featured in our outerwear this season.”

CHRISTOPHER RAEBURN: “The early inspiration is from an exhibition called ‘Last Days of the Arctic’ by Ragnar Axelsson, who has basically documented the disappearing world over the last 30 to 40 years. We have all original military garments, and it’s about how we then put them into the rest of the collection.”

GIEVES & HAWKES: “We had seen a lot of movement back to more ‘country,’ and we really wanted to do it in a very sophisticated way. A lot of the fabrics are quite dark and tonal, a lot of olive green, olive and brown mix and navy mixed with brown, a very rich masculine color tone. Coats are very important for us this season as well: A lot of the inspiration came from military archives [such as] officers’ coats and military coats. We slimmed them down, streamlined them and made them a little bit more urban.”

RICHARD NICOLL: “I’ve been looking at modern interpretations of formalwear for men. The collection is about opulence and richness of texture, pattern and color. It fuses Edwardian and sport detailing for a romantic take on modernism.”

HARDY AMIES: “Hardy Amies’ life and experiences are a really important starting point. We started to delve into his archives….There are some amazing images of him in his military uniform. He was recruited by a certain branch of the British Army, so he essentially became a spy. He was very interested in fit: There’s a story about him that he had his own military uniform tailored. We’ve taken that through to the collections, which have a luxury element to them, and are part military-inspired, part soft tailoring. From there, we’ve also developed an accessories collection that we’ll be launching for autumn-winter.”

KATIE EARY: “Being the patriot that I am, this season I will be paying homage to the Seventies Seditionaries.”

RICHARD JAMES: “This is the first time we’re doing something like this, and we’re calling it the New Edwardians. We’re sort of looking at Teddy Boys [the stylish teen rebels of Fifties Britain] and people from the 1950s, and we quite like the idea of it being, not old-fashioned, but a little bit retro. You can see that from the fabrics of the suits; they all look a bit old-fashioned. We’re keeping it old-fashioned, but making it contemporary.”