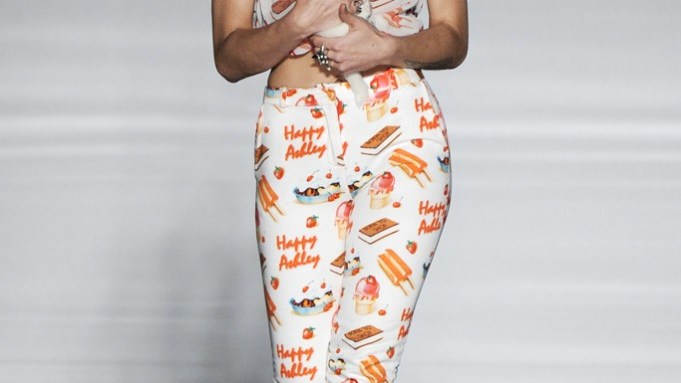 Ashley Williams, who will make her debut at London Fashion Week on the Fashion East catwalk, graduated from the University of Westminster last year. Her kitsch, retro graduate collection, modeled by her friend Alice Dellal and flatmate Pixie Geldof, was picked up by Joyrich in Los Angeles and soon-to-open Machine-A in Soho, London.

For fall, she swapped last season’s Americana prints — Texan oil rigs and ice creams — with motifs inspired by scrapbooks from the Fifties created by music fans. One is an Elvis print. The shapes are slightly boxy. “Not supertight — simple but elegant. You can’t be too fussy if there’s big prints all over it,” she said.

“‘Commercial juggernaut’ is what I thought the first time I saw Ashley’s clothes,” said Lulu Kennedy, Fashion East’s founder. “I really liked her aesthetic — cutesy with a twist — so it feels really fresh.”

It was an error on the behalf of his father that led China-born Haizhen Wang to study fashion at the Dalian University of Technology. “I have to thank my father and his mistake,” Wang said in an interview from his studio at Somerset House. “I was away when he filled in the form for me. I had wanted to study interior design or graphic design, but when I did the entrance exam, somehow, my score for fashion was the highest. I was so angry, but I couldn’t change. I struggled for a year, couldn’t be interested. But then I got interested.”

That interest led to a decision to move to London, which eventually saw him graduate from the Master’s of Arts course at Central Saint Martins. Last year, he won the prestigious Fashion Fringe prize for emerging talent. With stints at Max Mara, Boudicca and AllSaints under his belt, Wang launched his namesake label in 2010.

While last season was driven by the clean parallel lines of architect Santiago Calatrava, his fall silhouettes have been informed by the elongated shapes of Gothic churches, and in particular an image of the Eglise Saint Etienne in Beauvais, France.

“This collection came from my heart. It’s all about loneliness and depression; it’s quite cynical,” he said. “It’s about my fashion life and inspired by those women who have to work hard all winter while they wait for love.”

His first outing as part of Fashion East last season was a joyous riot of ruffles, lace, high-shine organza and pink. A lot of pink.

“Pink is very much my thing,” he said. “It’s that whole Marie Antoinette femininity thing.”

With that much girliness on the menu, one expects that Lo’s version of lovelorn, cynical depression might be brighter than most.

“There’s pussy bow blouses and long blazers,” he said. “Career dressing and pajama dressing at the same time. I think most fashion girls will get it.”

Jane Shepherdson’s is not a name that’s new in fashion circles. The chief executive officer at Whistles is credited with helping transform Topshop into the global fast-fashion giant it is today while she was brand director there. This, however, will be the first time that the high-end, High Street brand Whistles has shown on the schedule at London Fashion Week.

“Mainly, it’s because we have just started our international expansion,” said Shepherdson, citing her reasons for putting the brand on the catwalk. “It’s the right time. The collection is exactly where we want it to be. And, from a practical point of view, a show is the best way for us to reach international press and buyers.”

The fall collection will be shown at the Dover Street Arts Club, just down the road from the new Whistles flagship.

According to Shepherdson, this season will be “very luxe, wearable and effortless, as always.” There’ll be lots of military references in a palette of navy, pistachio, forest green and a splash of fuchsia. The signature print is an urban camouflage.

Besides the new Dover Street store and a new Web site, Whistles recently opened its first shop in Paris and will make its debut in Moscow with a store in February followed by Germany in March. The brand is in negotiations with two American department stores to open spaces, and a presence in Hong Kong will follow next year.