An unprecedented string of celebrations, from the Queen’s Diamond Jubilee to the 2012 Summer Olympics, focused the global spotlight on the city. 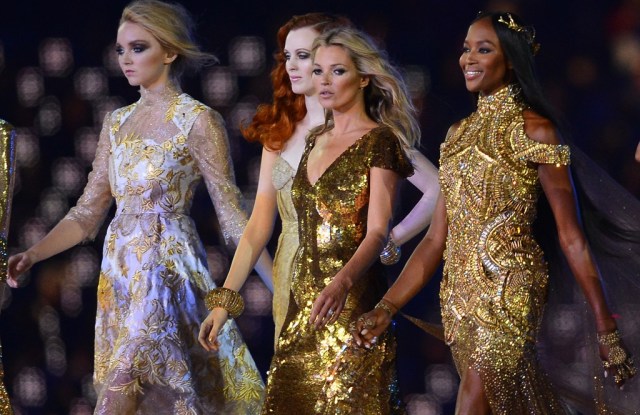 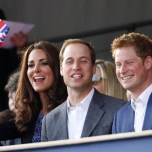 Nearly every Briton will remember the last 12 months as the year that the red, white and blue bunting never came down.

The past year has seen an unprecedented string of celebrations, from the Queen’s Diamond Jubilee, to the 2012 Summer Olympics, to the news this month that the Duke and Duchess of Cambridge are expecting their first child — an heir to the throne.

It was a year to remember British icons — and not just the Queen: The Rolling Stones and James Bond each marked 50 years in business. And the British Fashion Council celebrated the country’s stylish males with the unveiling in June of London Collections: Men, a twice-yearly fashion showcase.

It was Stella McCartney, the first fashion designer ever to create uniforms for Team GB and Paralympics GB, who kicked off Britain’s celebratory year when she unveiled her designs at the Tower of London in March.

The pieces were engineered to suit 46 individual sports and all of them featured an abstract take on the Union Jack in blue and white, with red details.

McCartney, who last month scooped the Designer and Brand honors at the annual British Fashion Awards for her efforts, said she was particularly proud about the dose of femininity she added to the women’s outfits. The jackets were belted and gently flared at the waist; gymnasts’ leotards featured sequins, and hockey shorts were disguised as tiered miniskirts.

“In the past, I think the women were handed men’s jackets and that was it — the look was very masculine,” she said after the launch.

Her collection also had its green credentials, with tennis player Andy Murray’s shirt made from 100 percent recycled polyester, while some 500,000 plastic bottles were used for other fabrics and trims.

The athletes’ uniforms were not the only show of British fashion on London’s Olympics pitch.

During the opening ceremony in July, Christopher Shannon, Michael van der Ham and Nasir Mazhar — who are all based in London’s East End, not far from the Olympic stadium — dressed 350 of the 1,200 dancers who took to the stage during a segment that focused on late 20th- and 21st-century British music. Their costumes were meant to represent the influence of British creativity on youth culture.

For that ceremony, which was broadcast worldwide, Jonathan Saunders dressed Emeli Sandé, who sang the hymn “Abide With Me,” while Richard James created the outfit for the Olympic flag bearer Haile Gebrselassie.

While the Olympics put a spotlight on British talent, it wasn’t so kind to retail. The first week of the 2012 Games was disastrous for central London shops as tourists and locals heeded the local government’s warnings about overcrowding and stayed away from town. Olympics spectators, meanwhile, spent their time and money at the Games’ Stratford venue.

“As soon as the Olympic torch went out, people began to buy again — it was like the flip of a switch,” said Michael Ward, managing director of Harrods, during a roundtable breakfast this fall, sponsored by Walpole, the organization that promotes British luxury brands.

Throughout the year, the Queen’s Diamond Jubilee celebrations showcased the royals’ fashion choices — and especially those of the Duchess of Cambridge, whose nine-day Jubilee trip to Southeast Asia with the duke was a parade of British and international designs. They ranged from a cream Alexander McQueen broderie anglaise skirt for a tour of a Rolls-Royce factory in Singapore, to a strapless fuchsia and orange dress made locally in the Solomon Islands for a dinner hosted by the Governor General at his private residence.

The duchess donned dresses by Jonathan Saunders, Alice by Temperley, Project D and a matching skirt and top by Raoul, in addition to other labels. And she famously chatted about her love of the designer discount mecca Bicester Village with a local Singaporean dignitary minutes after stepping off the plane at Changi Airport.

Next year is sure to bring more talk of fashion — maternity fashion — as the duchess prepares for the arrival of her first child — or children, if indeed she’s carrying twins.

But 2012 wasn’t only about women and women’s fashion: Following this year’s successful showcase, the BFC in January will stage the second edition of London Collections: Men, a three-day event with runway shows and presentations by labels including Alexander McQueen, Tom Ford, Richard James and J.W. Anderson.

In a report issued this year, the BFC estimated that more than 100 million pounds, or $161 million, worth of orders is placed each season, with three-quarters of that money coming from abroad.

The industry contributes about 21 billion pounds, or $33.81 billion, to the U.K. economy — twice as much as the publishing or automobile industries.