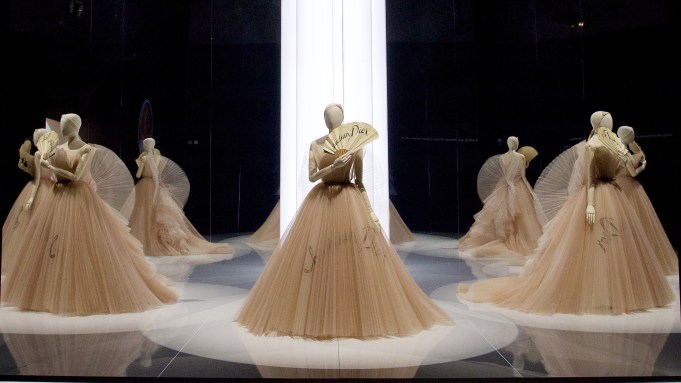 LONDON — “It’s all in the finesse,” said Sandra Choi of the House of Dior designs at the Victoria and Albert Museum. “It’s the simple things that are the hardest to get right and these Dior designers all get it.”

Choi joined guests including Jonathan Anderson, David Linley, Antonio Berardi, Stephen Jones, Anne Pitcher, Sebastian Manes, and a host of fashion and industry figures at the V&A on Tuesday night to mark the opening of “Christian Dior: Designer of Dreams,” which opens Feb. 2 and runs until July 19.

The largest and most comprehensive U.K. show on the House of Dior, it is a grand sweep of sparkle, rippling wool, sculpted jackets and floral prints and motifs.

The show throws light on Christian Dior’s fascination with Britain, his “lines” and defining looks, his international outlook and inspirations from history.

“The waists are so fantastic — Dior explored volumes in such an amazing way,” said Anderson, adding that Dior’s sculptural shapes and the mark of his hands on garments “will never go away.”

Jones, who has 162 hats in the exhibition, described the V&A show as “more intimate and charming” than the Paris one in 2017. “Paris was grand and reflected the power of France and the court of Christian Dior. London is mire about the idiosyncratic and the eccentric side,” he said.