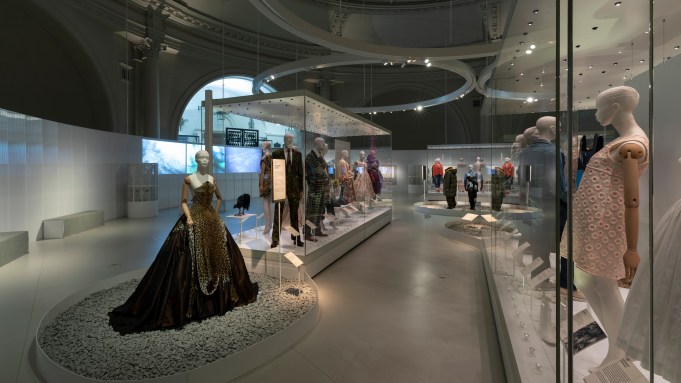 LONDON — The Victoria & Albert Museum has mounted an exhibit titled “Fashioned From Nature.” The exhibition explores the relationship between fashion and nature highlighting various objects starting from the early 1600s.

Curator Edwina Ehrman was intrigued with how fashion has been inspired by nature and when she proposed the exhibition, it was when the Rana Plaza disaster had just happened. Ehrman said there was definitely an increasing awareness about how polluting the fashion industry was.

“I felt that it would be great to create an exhibition that could be a forum for debate and discussion,” said Ehrman. “Where we could look about where we had got to, where we are, and why is the fashion industry one of the most polluting in the world and how that’s happened. But most importantly to look at solutions. And alongside that story, I’m telling a negative story through a lot of beautiful pieces, which actually makes people quite uncomfortable.”

Ehrman said the exhibit has a positive story about people who cared and there’s a strength throughout the exhibition, talking about protests, education and activism.

Ehrman said she wanted garments that had high fashion value, that were colorful, stylish and that also showed different ways forward. “Some brands like Burberry have committed to using 100 percent renewable energy by 2022 and that for me is very important,” said Ehrman.

There will be more than 300 pieces on display, including Emma Watson’s Calvin Klein dress made from recycled plastic bottles that she wore to the 2016 Met Gala as a part of the Green Carpet Challenge with Eco-Age as well as a floral dress from Erdem’s Green Carpet Challenge collection. There is also an upcycled dress by Christopher Raeburn.

The exhibit highlights how nature is an inspiration for designers as seen on a Gucci bag adorned with beetle motifs or a Giles Deacon haute couture dress that features an egg print, and gowns from Jean Paul Gaultier done in a leopard print. There are also nature influenced accessories crafted by Christian Dior, Dries van Noten and Philip Treacy on display. The exhibition also puts a spotlight on the incorporation of innovative materials as seen on a Ferragamo look made from “orange fiber” comprised from waste from the Italian citrus industry or an H&M Conscious dress made from recycled plastic. There’s also a cotton denim jacket and jeans from G-Star Raw that was designed with a Cradle to Cradle Certified fabric.

“It’s compressed organic cotton,” said Frouke Bruinsma, director of corporate social responsibility. “We have designed the fabric with our partners along with the technology behind it. What does it mean to be Cradle to Cradle certified? It’s the most rigorous certification in the world. It’s the only one designed for the circular economy.”

The exhibition also delves into fashion production and how materials affect the environment. It focuses on materials used in the 17th and 18th centuries, such as cotton, flax, silk and wool, as well as controversial materials to man-made fibers which led to air and water pollution. It will also show how protesters have brought this issue to light such as Vivienne Westwood and Fashion Revolution and how they are focused on a more sustainable fashion business.

The exhibit also showcases a number of ways to reduce the harsh impact on the environment. This includes a tunic and trousers made from synthetic spider silk from Bolt Threads x Stella McCartney. The designer also unveiled its latest effort with Bolt Threads: a Mylo Falabella Prototype 1. She unveiled a new collaboration with synthetic textile dying company Colorifix — a lilac organic cotton dress inspired by her Summer 2018 range treated using engineered bacteria. There is also sustainable men’s wear and women’s wear from McCartney’s previous collections including a Jem belted long sleeve shirt and Cicely trousers from her fall 2017 runway collection.

The Centre for Sustainable Fashion at London College of Fashion and UAL have also created two installations that focus on “Fashion Now” and “Fashion Future,” where visitors are able to experience the impact on nature of the production, wearing and removal of each garment.

The exhibit held in association with the European Confederation of Flax and Hemp – CELC and G-Star Raw will run from April 21 until Jan. 27.